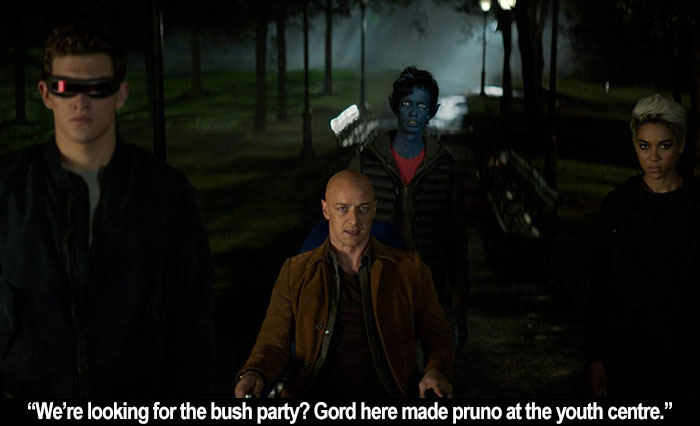 by Walter Chaw So downbeat it plays like a dirge, or a riff on Bob Dylan's "Like a Rolling Stone" (which Dylan described as ten pages of self-loathing prose "vomit" that needed to be set to music), Simon Kinberg's Dark Phoenix ain't got nothing and so's got nothing left to lose. Subject to numerous delays and a now-notorious reshoot in response to Captain Marvel beating them to the proverbial punch with a space-set finale, it is, against all odds, a tidy, thematically-succinct capper to Fox's X-Men saga--which, at its best, was always explicit about how these films were metaphors for not fitting in, not being accepted for what you were born as, and the importance of building families when your biological ones turn out to be frightened and faithless. Bryan Singer handled the first two instalments before leaving to do Superman Returns. Those three films--X-Men, X2: X-Men United, and Superman Returns--comprise a trilogy of mythologies for disaffected loners, brutalized by disappointment and betrayal, looking within themselves for value in a universe that sets them eternally, pointedly apart. There's an interesting paper to be written on why the radioactive Singer was so good at telling these kinds of stories. Or maybe not so interesting. After Brett Ratner's pitiful conclusion to the original trilogy, X-Men: The Last Stand, the series began to play with its timelines in exactly the same way reboots of the comics do--jumping ahead decades, sending series favourite Wolverine back in time to stop a mutant genocide--and consequently delivered a few gems along the way in X-Men: Days of Future Past, The Wolverine, and Logan. In the battle between continuity and quality, I guess I don't care if these characters never seem to age.

Based loosely on a beloved X-Men story from the early-1980s that was also the basis of The Last Stand, Dark Phoenix elides much of the mystical/interstellar mumbo-jumbo of its source material in favour of the more earthbound narrative these films have staked out for themselves. Gone, too, are the soap opera melodramatics that held young readers enraptured. Not everything old was good, you guys. The "Phoenix" story starts in the comics with a young Jean Grey (Summer Fontana as a child; Sophie Turner as an adult) witnessing the death of a young friend and, through an accidental psychic link, alerting a nexus of cosmic power called "Phoenix" to her tiny existence. In Dark Phoenix, the inciting incident for Jean's budding omnipotence is her mom's irritating affection for Glen Campbell's "By The Time I Get to Phoenix" on the radio during a road trip. When he croons "By the time I get to Phoenix, she'll be rising," Jean uses her telekinesis to switch over to a little Warren Zevon. Never mind that "Werewolves of London" didn't get released as a single until three years after the film's "1975" chyron--chalk it up to alternate timelines and the importance of shouting out in the most oblique way possible to the Wolverine who isn't there. In the ensuing struggle over AM Gold standards, Jean sort of accidentally kills her parents--a beautifully-staged car accident complete with a grisly outcome despite Jean herself remaining unscathed. Cut to Professor X (James McAvoy) doing his best to save her soul by suppressing her memories. He has good intentions. "I don't like the other doctors," Jean says. "You're not broken," Professor X says. He's wrong, you know--she's very broken, and the road to Hell is paved with good intentions.

Dark Phoenix is about what happens when a heavily-traumatized person is taught to stifle her trauma for the security of the perceived greater good. She's the most powerful mutant by a long shot, but she's been adjusted so as to fear her own power. The opening sequence here establishes that in this timeline, the X-Men are not social outcasts, but rather used by the government as a specialized task force when no other options are available. Jean asks team leader Mystique (Jennifer Lawrence) if there's anything wrong and Mystique says she forgets that Jean can read minds. "I can see it all over your face," Jean says. It's one of two subtly-written moments that establish their friendship in isolation from male intervention. (If you're keeping track, and for what it's worth (it's not worth much), Dark Phoenix passes the Bechdel Test.) Jean says that if Mystique says it's safe, that's all she needs. Jean is passive, an observer to the drama of her life, an afterthought whose unique skill set is the last thing anyone thinks of using. In both the comics arc and the film, the Phoenix energy seeks Jean out, though in a departure it's not given sentience in Dark Phoenix, not really. I think it's a good change. All that stuff about crystals and Cyclops (Tye Sheridan) proposing to Jean and then almost dying, thus causing Jean to have a psychotic break, is, I'm sorry, the worst kind of serial nonsense.

The mutants save some astronauts and, in the process, Jean absorbs a godlike amount of extraterrestrial energy. She seems all right, however, and returns to her state of quiet suffering, so no harm done, right? Except quite a bit of harm was done, and when a band of evil shape-shifting aliens looking for the power Jean's absorbed, led by an Edgar Winter-looking Jessica Chastain, Jean begins to wake to the idea that she's been lied to all of her life. More importantly, she learns that things mashed into the basement of our subconscious tend to become monstrous and unwieldy. Dark Phoenix's closest analogue is Luca Guadagnino's Suspiria remake: another tale of a young woman, a survivor, who finds herself suddenly extraordinarily powerful for her difference and not in spite of it. The conclusion even mirrors that film's explosive, emetic climax as Jean explodes bad guys with a thought, a glance, or spares them with the same insouciant grace. The School for the Gifted, run by Professor X as both training ground and sanctuary for the uncannily gifted, is in a state of tension as the picture opens, with leaders Mystique and Hank (Nicholas Hoult) questioning how much of their mentor's ego is tied to the institution and its great acts. Mystique says the women are saving the men all the time and that maybe he should think about changing their group's name to "X-Women." Later, she reminds what the X stands for in the first place. Hank challenges Professor X to admit that he made a mistake in repressing Jean's memories. The Professor refuses to accept any fault at all. The school is on the verge of an ideological fracture, and much of the dialogue in these introductory moments revolves around how the world is changing (and not for the better)--about how when heroic outsiders working for the good of the people are co-opted by corporations and governments to enforce their version of the status quo, they're suddenly blunt instruments of the 1%. For a superhero film in 2019 to question so directly and stridently how important rebellion is to morality is like something designed to deprogram a cult. As the last non-Disney-developed entry in this series, there are layers upon layers of meaning to unpack.

About an hour in Professor X, Mystique, and Hank enter Jean's mind to "save" her again by rebuilding the walls Professor X erected to "protect" her. Everyone is horrified. As they should be. But Jean starts to fight back and discovers she's powerful enough to do it--or, closer to the point, that the things she's repressed no longer will be. It's the way of repressed things, after all, to explode. I'm reminded of Brian De Palma's The Fury, a movie that likewise deals with "special" children weaponized by the people entrusted to protect them. It doesn't end well there, either. Jean leaves the school in search of her lost self and in the process kills people she loves. Mystique stands in the blast radius and tells Jean that she loves her, but Jean's not ready to hear that yet. Magneto, himself a repository of pain in these films (his origin is in the Holocaust), offers her refuge as best he can. I think of a scene immediately following their triumphant return from space, though, where Jean comes on strong to her boyfriend Cyclops. He backs off and asks, again, if she's feeling okay. Aggressive female sexuality is a sign of disturbance, you see, but Jean's more than okay. What's dangerous is the villain (she's called "Margaret" as a human) talking to Jean about the men who have controlled her all her life. It's a scene that recalls the moment in Suspiria where the kindly old shrink is accused of taking women's pain and crafting syndromes from it. Professor X, Jean's cowardly father (Scott Shepherd), her boyfriend, her teammates... All so interested in protecting Jean, they forget that in order to protect someone they must first cast them in the role of someone needing protection. While Lawrence isn't in this movie very much, Mystique calling out masculine attempts at controlling women is bracing stuff and better work than she's done in years.

Dark Phoenix is bleak, despairing, a portrait of trauma that does real honour to the traumatized. When Jean proclaims at the end that her strength is her emotions, it lands as a powerful declaration of a lot. That a victim deserves to own the fallout of her experiences and not have them rationalized away or diminished. That it's important for the abused to make a family around them that understands them and allows them to be broken. It's a barbaric yawp at the messiness of recovery. What it's not is a statement that trauma makes you stronger. Trauma makes you traumatized. It's not a "My name is CAROL!" proclamation of facile empowerment, but a complicated affirmation of a complicated figure. Something was done to you and it's terrible and you'll never be okay. Speaking your truth is power. Consider the rationalizations provided for Jean's behaviour and misbehaviour (Cyclops says, "Jean lost control, but she's still our friend") and how they fall on deaf ears. "That was not Jean," say the men. Leave it to Storm (Alexandra Shipp) to warn them that men see women as how they want to see them until it's too late and everyone is hurting.

Dark Phoenix is a powerful film, shockingly so. People die you don't expect to die. The experience of it is akin to the opening of Days of Future Past, where the Sentinels are killing everyone--or Logan, where everyone's dead already. It's exhilarating to see intellectual properties used as they were intended: as metaphors for our fears, our sins, our gods, ourselves. The conclusion involving subway cars and surprise alliances is the best extended action sequence of the entire franchise, not the least for the symbolic power of trains. It's still, for what it's worth, a pleasure to see Magneto unleashed, and in any context other than that of a film pre-packaged to be a soft pitch down the middle for critics ready to line one over the fence, a showdown between critical darlings Fassbender and Chastain would have been a celebrated occasion. The picture's a lament for one era and a benediction for another. I'm reminded of a poem--is it Milton?--where the pagan gods line up to celebrate the birth of Christ (which for them, after all, heralds their own obsolescence and oblivion). Dark Phoenix is entirely of this moment and entirely its own thing: child of trauma, song of defiance. They lost, but they went out full of rage and purpose.