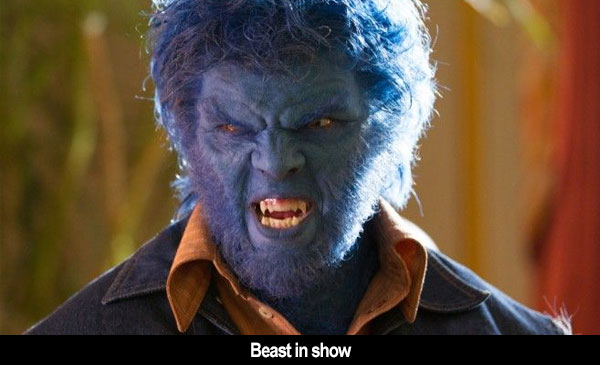 by Walter Chaw The seventh X-Men film including the two Wolverine flicks, Bryan Singer's X-Men: Days of Future Past (hereafter X7) is a sterling return to form for Singer, exiled after X2 for choosing to helm the spectacularly-underestimated Superman Returns. He brings with him, as he brought to the Superman mythology, a complete empathy with the material. He understands that the X-Men property--comic-book mutants battling human bureaucrats aiming to outlaw them as alien threats--is, just like the Superman property, at its heart about the pain and complexity of being born different. They're assimilation melodramas that present their heroes with the seductive choice to pass as "normals" when possible, to seek vengeance against bigotry as it presents itself, or to rise above it to achieve a sense of self and carve out a corner of the world for themselves.

There's a brilliant sequence in X2 where Bobby (Shawn Ashmore) makes the painful decision to "come out" to his family as a mutant and his mother asks him if he couldn't maybe just choose not to be different. Singer gets it. His Superman's promise to his son is that his son will never be alone as he himself was; the sequel, never to be produced, it seems, had Superman breaking that promise. Singer's films, boiled to their centre, are either overtly or covertly about betrayal and identity: key elements, both, of growing up gay in a still-intolerant United States. What he's done with X7 is so affecting, because it's not about levelling cities (no matter how impressive that third act), but rather about how individual choices matter--and how acts of violence and displays of power (shock and awe, n'est-ce pas?) tend to breed reciprocal displays and a need for escalation. It's a superhero movie about pacifism and acceptance.

More, it's about mercy for individuals who "stray from the path," the idea being that just because they're lost now doesn't mean they're doomed to be lost forever. The time-travel element (more astral projection, really) of X7, then, becomes an allegorical exercise that struggles against ideas of predestination. It suggests choice. As Professor Xavier (Patrick Stewart) assures from a distant, apocalyptic future, time isn't a river whose flow can't be altered. The magic element essential for change in the course of human events? Hope. Corny, yes, but it's been some time since the idea of hope was offered up in our entertainments, and now, within a week of each other, two major American tentpole releases, X7 and Godzilla (arguably The Amazing Spider-Man 2, as well, with its child-hero epilogue), have offered as their foundational principle this notion that the world is a terrible place, it's true, but worth saving. If you asked me to put a finger to our zeitgeist at this moment, it's perhaps a gathering resolve around activism in the face of global crises--impatience with intolerance and ideologues and legislative gridlock and myopia. We'll see.

In brief, X7 begins in a future where terminators called "Sentinels" have gained the ability to hunt and destroy any mutant no matter their ability and have thus enslaved all of humanity through fear and genetic cleansing. Kitty Pryde (Ellen Page), able to jump a consciousness a few days into the past, keeps the remaining X-Men hours ahead of the extermination crews. Professor X and Magneto (Ian McKellen), allies now in the struggle against the Sentinels, devise a plan to jump someone's consciousness back to 1973 to stop Mystique (Jennifer Lawrence) from assassinating industrialist Trask (Peter Dinklage), thus justifying the Sentinel program by confirming the mutant threat. Wolverine (Hugh Jackman) is the only prospect for the experiment strong enough to survive it, and so he wakes up in his 1973 body (and wardrobe, and soundtrack) with the mission to convince a strung-out Charles "Professor X" Xavier (James McAvoy) and a rage-driven Erik "Magneto" Lehnsherr (Michael Fassbender) to put aside their differences and provide a different future for us all.

Professor X offers as a last entreaty before Wolvie's time slip, "I was lost. Be patient with me." It's a theme that carries through the rest of the film as Mystique, Magneto, and even Charles must be brought back into the fold--not by force, but with patience and understanding. The picture's key moments are appeals to kinder natures; the tension arises not from falling buildings, but from accountability for actions and inactions alike and, finally, through a reminder that the only thing that can change the world is the hope for a better one. If one were looking for an apologia for Singer's alleged misdeeds, it's possible to see X7 as his On the Waterfront. I hope it's not true. Yet the movie is kind of a stunner, really, for having the temerity to create characters each devastated in their own way by the widespread lack of acceptance of them.

There's a scene in a hospital with Mystique where a nurse offers how awful it must be to be abnormal; another where a juvenile delinquent casually expresses his damage through larceny and insouciance; another where a quartet of soldiers stationed in Saigon before the fall ask hopefully if they're returning home, when in truth they're being transported for a more insidious purpose. Heavy stuff, it's true, but the action sequences, when they happen, are as delightful as the long periods between are introspective. Quicksilver (Evan Peters) owns the film's showcase moment in the second-best use of a Jim Croce song ever in a movie, while Erik gets to demonstrate the limitlessness of his power and capacity for cruelty. But then, consider that X7 is more interested in scenes like the one early on where Erik tells Charles exactly how Charles has failed through his inability to engage--and how the hero/sage of this universe, Xavier, as a younger man was a junkie looking for the fix of a drug that renders him normal in a world that abhors specialness.

The images of drug use are powerful, as is the violence and sense of doom in the possible future the film presents. It's not about fantasies at play, it's about the zero-sum game of vengeance. Everyone dies at least once in X7, and dies ugly. It's the rare comic-book movie that has a sense of something at stake. There's real gravity to it that I can only attribute to Singer's reduction of all that maelstrom down to very personal failings and his ultimate elevation of every act of heroism from the seed of one person making the hard choice at the right time. I compared the intent and aspiration of his Superman Returns once upon a time to Milton's invocation in "Paradise Lost," and he attempts it again here. Singer is doing his best to justify the ways of these gods to men. More, he does as any great mythologist does: he makes the actions of gods recognizable as magnifications of the actions of men.

Though what we do to be the heroes of our own lives seldom affects the fate of nations, it certainly affects the lives of those we love. No, I take that back: I believe that X7 wants to inspire in us the sense that what we do does affect the course of history. I think the common thread of these first three "blockbuster" films in summer 2014--and my common affection for them (add Aronofsky's Noah to that mix)--is their desire to inspire hope through gods that see us for our faults and want to help us all the same. X7 believes that choices matter, that individuals matter, and that the world, at least this world, can be as easily saved by acts of grace as it is destroyed by intolerance and fear. It's wonderful. Now if there were just some way we could convince someone to greenlight Singer's Last Son of Krypton, we'd really be in business.