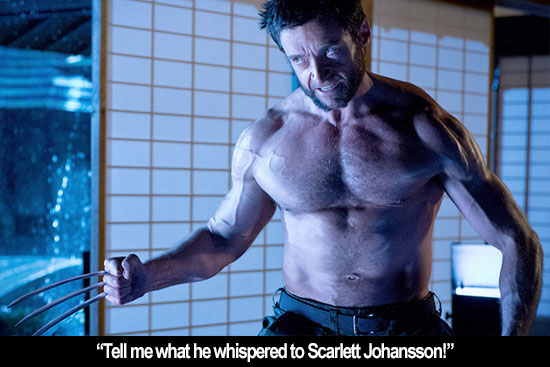 by Walter Chaw James Mangold's The Wolverine is lovely, unusual, novel enough that the moments it makes concessions to its genre and comic-book origins are the same moments that feel like a shame. It's not that they don't work, exactly--it's that when a brooding character study offset by a few delightful action scenes introduces an adamantium samurai mecha and a Poison Ivy manqué to bring it all home, well...it's that it works too well at being something the film is otherwise not. It's two movies, really: a unique one about women in tension; and a more common one about a grief-stricken man taking on the responsibility of protecting a surrogate. Both are complex. It's a pity that, by dint of license and expectation, The Wolverine had to be a literal superhero movie and not something more covert like The Caveman's Valentine or The Brave One. At the end, the only place to put the blame is the impossibility of funding a picture like this without the license and expectation: no one would invest, it would seem, in an anonymous story about a man's mute, impotent melancholy and the many females around him engaged in the maintenance of their separate, disintegrating orbits.

Logan (Hugh Jackman), nickname "Wolverine," has a mutant healing ability and bone claws that spring out from between his knuckles, augmented at some point along the way with a skeletal lacing of unbreakable metal. He's essentially a giant testosterone hormone: hairy, violent, occasionally lonesome, and one of the most popular figures in the Marvel stable because of the barely-suppressed vengeance fantasy he represents for the adolescent frustrations of their key demographic. For the first 90% of the film, he's also a handy metaphor for the dangers of long-suppressed rage and of mis-channelling frustration and loneliness into aggression. He's a metaphor for a bullied teen, in a way, and I've liked this character best on film--going back to Bryan Singer's personal takes on the mythology--when he's cut the shit and just started stabbing people to death. Revealing...too revealing, honestly; and The Wolverine plays that as the pathetic, self-loathing bullshit it is, up until a mysterious woman named Yukio (Rila Fukushima, one of two marvellous discoveries in the film) arrives with a plane to Tokyo and the request of a dying man.

The film humanizes Logan, removing the mutant healing ability for most of it, and the way that Jackman plays his unfamiliar vulnerability is a feat doomed to be underestimated. It's an all-physical performance that reminds how good Jackman can be when given something to do, as good in its way as his work in The Fountain--and similar, too, in that this Logan mourns a lost love (Famke Janssen) while cursed himself with a kind of immortality. The dying man is industrialist Yashida (Hal Yamanouchi), who first appears on an impossibly-cool deathbed that makes a marionette of his diseased meat. It seems that Logan saved a young Yashida from the Nagasaki bombing (an event recreated with grim fidelity from contemporary photographs of the atrocity), inaugurating one of the major subtexts of the piece: racism towards "gaijin," a Japanese word considered pejorative that means, in many contexts, "alien." Yashida's son, Shingen (the great Hiroyuki Sanada), curses Logan with the epithet. (Given what we witness, we gaijin have sudden empathy for the sentiment.) It's rare that racism against Caucasians in American cinema is treated with any measure of empathy, and rarer still that the film isn't concerned with the tension between these two men, but rather with the revelation that Yashida's granddaughter Mariko (Tao Okamoto, heartbreakingly beautiful) is about to be given the keys to the proverbial kingdom, either because she's very strong, or very weak.

The Wolverine is ultimately about Mariko, then, and the orphan adopted essentially to be the only friend who would have her, Rukio. Rukio, who, in an otherwise-conventional moment of auto-mutilation by the male hero, dubs herself his bodyguard and then proceeds to live up to that description. Indeed, Logan is saved repeatedly by women in this film, women with their own crosses to bear, while he's forever on the outside. It's a compelling theme, one so distinct that for it to flower in the middle of a tentpole is an event so startling as to render the blockbuster framework almost invisible. That's not to deny there's a great set-piece involving a bullet train, or a genuinely exciting sequence with a gaggle of ninja that ends in the middle of a street with grappling-arrows and a nigh-invulnerable foe. More to say that for the longest time, The Wolverine balances character study with big-budget action and tantalizes with the hope that it will be genuinely exceptional. And then there's the epic battle, and the weird supervillain monologizing, and the snake-lady thing, and the post-credits teaser, and the yawning. I'll watch it again; I'll just leave with ten minutes to go next time.

I saw this film and liked it much more than I anticipated I would. You really nail the reasons why. The "outsider" aspect and the nice pacing of the film just made it surprisingly enjoyable. Great review, as usual.