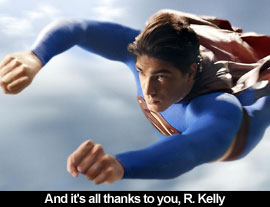 by Walter Chaw The saddest, most desperately lonesome and melancholy mainstream film in recent memory, Bryan Singer's Superman Returns is about loss and, as a Scrabble board early in the picture denotes, alienation. It's about fathers and sons and, by extension, why so many of our mythologies are about sons divorced from fathers who spend the rest of their lives, nay, the rest of eternity striving for impossible reunions. Prometheus is mentioned by name while Atlas, Christ, and Lucifer are referenced in image, Singer's transition from fallen Titans to fallen Angels an ineffably graceful symbolic examination of where, exactly, comic-book martyrs and gods (of which Superman is both) place in the modern spiritual pantheon. Superman is a figure at a juncture in the middle of pagan and Christian just as he's become something like a transitional icon bridging science and religion, classic comics and the modern superhero era, and Americana and the Wasteland. In the film, Superman is a character warring between what he wants and the destiny his father has charted for him--and aren't we all. When a child in Superman Returns takes a picture with his cell phone that we recognize as the cover for Superman's debut, 1938's "Action Comics" No. 1, it's at once bemused and in love with Richard Donner's original vision of the hero, but most of all it's eloquent in its assured, maybe even prickly, recognition of where we were and what we've become.

In that loss of innocence, that black stain of experience, Singer tells his story of Superman/Clark Kent (Brandon Routh, doing a mean, if superficial, Christopher Reeve impersonation)--returned to Earth following a five-year absence during which he was searching for his demolished home planet--spending his first dawn back burying a huge chunk of ruin at his parent's Smallville farmhouse and remembering the day he discovered he could fly. It's weird, uncommented-upon, and poetic (you can imagine that the Kents' acreage is littered with their boy's morbid toy collection), and Singer's decision to retain John Williams's stirring theme music and Marlon Brando's recorded, but unused, monologues from the 1978 film further instil the piece with nostalgia while defining "nostalgia" as a phenomenon that's laced with regret.

Evil real estate developer Lex Luthor (Kevin Spacey), last seen trying to make beachfront property in Nevada, then bargaining for emperor-ship of Australia, resurfaces, too, after half a decade in the slammer that earned him the hard-won philosophy that "No matter what my gifts, they were worthless against a carton of cigarettes and a metal shiv in my pocket." He's nasty where Superman and love interest Lois Lane (Kate Bosworth), who's found a companion (James Marsden) and motherhood in the intervening years, are tortured and conflicted. The movie has been described as a throwback, and in its prioritizing of character development over action set-pieces, it is. But more to the point, Superman Returns is about the toll the last quarter-century has taken on the generation that first believed a man could fly. It's no accident that the climax of the picture is a moment where he can't anymore.

Watch for the way that outer space (visited more often here than in the previous films combined) dissolves into the glow stars that still cling to Clark's childhood ceiling; the way that baseball is resuscitated America's central pastime; or the way that Singer cuts every cornball moment with a little humour at the expense of our childish hunger for it (like Lois sliding down a plastic slide, or a little boy's asthmatic wheeze off-camera). We're invited to laugh knowingly at our craving for innocence, which, by the very act of it, reminds us of the emotional Eden we've left behind. Were the film all whiz-bang, I think it would be much easier to dismiss a visceral response to it. Note how Superman's "Can You Read My Mind" romantic number is transformed into a dangerous waltz between a woman contemplating betraying a good, brave man and a jealous ex-boyfriend using everything in his arsenal to lure her. Called a "boy scout" in the earlier films, the Man of Steel is referred to as a "selfish god" in this one by Luthor, and the transformation from saint to sinner is encapsulated just that neatly. But then there's the moment when Superman says, "You say that the world doesn't need a saviour, but when I listen to it, all I hear are people crying out for one," and everything that's simple about this film as allegory falls away.

Superman Returns is a grand thing: an emotional and provocative, spiritual and intellectual, pop and arthouse, and above all mature film about this character, an alien, out-of-place and utterly alone, who, when he gets sick, can't even receive a visit from his mother. Singer uses Milton's mnemonic play of "sun" and "Son" to wondrous visual use, porting Gyorgi Ligeti's "Lux Aeterna" in one magisterial moment lifted directly from 2001: A Space Odyssey, suggesting almost subliminally the link between cinematic fathers and godheads and Singer's response to them from atop their shoulders. He's constantly expanding the central theme of paternal/filial relationships to creators and re-creators (modern and post-modern). To say the film is assured is an understatement--better to say that despite being almost embarrassingly personal, it remains a potent entertainment. Its action sequences are exceptionally-paced, easy to follow, move the plot, and develop the characters. Its sets and costumes are impeccable, and if the performances are more iconographic than emotional, that perceived deficiency I choose to regard as a conscious choice on Singer's part to populate his temple with new archetypes. Spacey is fantastic (even if Parker Posey as his moll is no more complicated than Valerie Perrine's identically-functioning Miss Teschmacher from the first two films): he's the foil and, remarkably, he's the character with whom the audience identifies. Singer is a poet of the devil's part, of course, but I think he knows it. That makes Superman Returns "Paradise Lost" for Generation X, and damned if it can't almost bear the weight of that comparison on its sober blue shoulders. Originally published: June 28, 2006.

Why so touchy, 'srs'? Why such violent abreaction to this film and this review? Tell me about your mother.