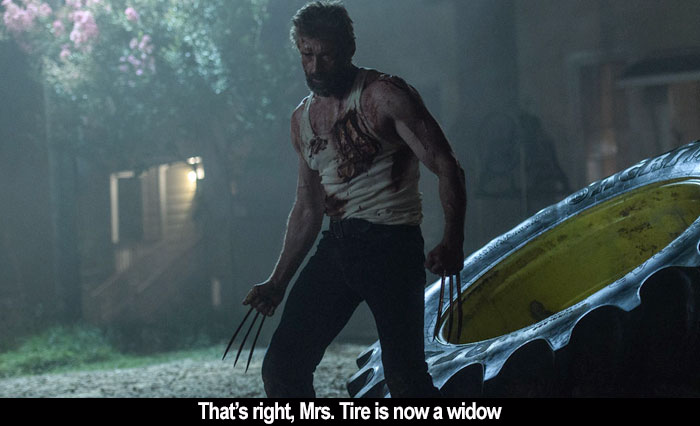 THE GIRL WITH ALL THE GIFTS
***/****
starring Gemma Arterton, Paddy Considine, Glenn Close, Sennia Nanua
screenplay by Mike Carey, based on his novel
directed by Colm McCarthy

by Walter Chaw Movements start this way, with one or two events that could be thought of as coincidence in response to some greater trend in our culture, perhaps--or, more likely, in response to some greater corruption. I've long referred to movies, especially genre movies, as indicator species in our cultural swamp. They're the first to show evidence of introduced toxins; at minimum, they're the first major art form to disseminate warnings widely. Jordan Peele's sleeper hit Get Out is just the latest in a recent spate of pictures that have caught the zeitgeist. Test the theory: would it have been as popular in another time? Movies are not unlike Percy Shelley's "dead thoughts... Like wither'd leaves" carried on divine winds to quicken new births. It's a florid reference to justify an unpopular concept. Not religious in any way, I find sublimity in the idea that human hands work in concert sometimes, and the close study of their products can provide insight into the world as it is, not simply as it was. Find in James Mangold's Logan and Colm McCarthy's more or less contemporaneous The Girl with All the Gifts (hereafter Girl) complementary, near identical concepts executed in largely the same way--proof for me of a body politic reacting in concert to poison. As grim as they are (with Logan actually verging on vile and mean-spirited), they are nonetheless to me evidence of at least some collective immune response. Artifacts of resistance left for the anthropologists. Despite their apparent nihilism, they are proof, as referenced explicitly in Girl, of hope.

Collect these films with Rogue One to form a loose, post-election trilogy telling of rebellions led by minorities, young women at their head, asserting themselves against authoritarian rule, fascism, nationalism. Only the most wilfully obtuse could fail to appreciate their timeliness. Girl and Logan even share first-act plot points of strongholds being overrun, leading to extended road exoduses complete with girl and girl's protector, plus epilogues suggesting that the age of (white?) man is over, to be replaced by this multicultural diaspora whose leader is female. Our future is a matriarchy. Remember that the last shot of Rogue One is of a different young woman receiving a literal baton from her predecessor to continue the fight--and that the next film in the United States' greatest shared mythology is set to see that baton passed again, to another young woman and her black boyfriend. Indeed, both Girl and Logan are additionally stories of miscegenation: literal mixings of the blood to form different, and superior, hybrids. (Not just physically (though that's implied), but morally as well.) To feed a popular meme, if liberals have their way, the future is all-inclusive. It's not idealism, it's fatalism. A bitter pill to swallow for people who don't believe in evolution is evidence of evolution in nearly every popular cultural product. I understand why white nationalists feel like survivors in an apocalypse overrun by alien corruption. Their feelings are besieged on all sides by facts. Facts are inexorable things and eventually overwhelming.

Girl is based on an exceptional novel by M.R. Carey that opens in a heavily-fortified military installation where children, infected with a fungus in the womb, are raised as potential vaccine vectors to be harvested by scientists, as led by the brilliant Dr. Caldwell (Glenn Close). Newcomer Sennia Nanua's Melanie has a favourite teacher in Ms. Justineau (Gemma Arterton), who has a tough time seeing her charges--strapped to wheelchairs for their lessons--as monsters, much to the consternation of Sgt. Parks (Paddy Considine). When the walls come down, Melanie, Justineau, Caldwell, and Parks escape into the post-apocalypse in hopes of linking up with other survivors--or, at the least, of solving the riddle of the contagion to salvage whatever remains of the old guard. Turns out there's not much left and what is there isn't much worth saving. The innovation of Girl is that Melanie is, in fact, a monster. She's the evolution of George Romero's Bub: a being straddling two worlds without fully belonging to either. I like the explanation of the contagion as a variety of Cordyceps, which strikes me as frighteningly plausible. Horror films are best when they borrow from and reflect reality. There isn't anything scarier than truth; dig it.

Various zombie-movie tropes are honoured: the journey through an infested city, the baddies quiescent until the proverbial foot to broken twig; the desperate flight; the collage of headshots. What's different are moments like the one where Melanie, covered with blood from a recent meal, submits meekly to handcuffs and a Hannibal Lecter mask, after which a wary Parks offers a "good job." If Get Out can be read with the most profit as a canny, often extraordinary commentary on the possession and trade of the black body, here's a visual representation of the same in which a bright young black woman is celebrated for her intelligence as a particularly useful beast. In the wilderness, Melanie discovers there's a feral band of children like her. She believes that what they need is not just a leader, but an education. Girl is about minorities asserting themselves, young women asserting themselves (including Ms. Justineau against the stentorian Caldwell and hyper-masculine Parks), and the power of education. The spread of the fungus is deadly, the spread of stories (Ms. Justineau is fond of teaching Prometheus and Odysseus) more so. Giving too much away to say it, but the end of Girl is the death of the world. It is Richard Matheson's true ending for I Am Legend, honoured here at last as wither'd leaves spread on Melanie's divine winds. This world is over, and good riddance to it.

Logan has almost an identical resolution, as young Laura (Dafne Keen, likewise making her screen debut) finds deliverance on the pages, almost literally, of an old comic book. She's the product of a government experiment, born of a test tube using unwitting, brown mothers impregnated with stored genetic materials. A heroic nurse (Elizabeth Rodriguez) who declares that the white men in charge of the experiments thought them too stupid to understand what they were doing, spirits Laura away when a culling begins, committed to taking Laura to a set of coordinates where stands, if the comics are true, a place called "Eden." It's on the nose, admittedly, but almost nothing else about the film is executed in any expected way. It's dark as pitch. Hopeless. Doom hangs over every second of it. The expectation is that no one gets out alive. Like the Pandora's Box story, the only thing that really does is Hope. It's a mixed blessing to have hope when everything's shit. James Mangold returns to the Wolverine universe after his exceptional The Wolverine--that one only compromised by a silly third act and its adamantium samurai. He brings with it a particular Mad Max look and, truly, the film Logan most resembles is the third entry in that series, Mad Max Beyond Thunderdome. Mangold seems to have learned from past mistakes; Logan is lean and angry from beginning to end, finding time halfway through for an A Perfect World interlude with a subsistence black farming family that gives the dying Professor X (Patrick Stewart) his last "truly perfect" night.

Wolverine (Hugh Jackman)--though only others ever refer to him as such--is Laura's reluctant guardian. He takes off with her across the middle of the United States, Professor X in tow, with an evil scientist (Richard E. Grant) and his cybernetic henchman (Boyd Holbrook) not far behind. The mutants have been all but exterminated in this timeline, leading to a couple of interesting The Incredibles moments where Wolverine is recognized, to his horrified denial. It's an unsettling detail, given that mutations in this universe were always code for homosexuality and other charged identity issues--and merely the first of several contemporary analogues embedded in the text. I love a moment where the dementia-stricken Professor X recalls through his haze that his inability to control his mind has resulted, in some dim past, in essentially the detonation of a psychic weapon of mass destruction over an innocent civilian population. We see what that looks like in Logan when, in the aftermath, our heroes navigate a battleground littered with non-combatants. For all the wrestling in the Marvel Universe with collateral damage, this is the best, most devastating representation of it.

There's more. There's a conversation about water rights (really); there's a peek into a future where blue-collar jobs are completely automated; there's discussion about the appropriation of minorities and the disastrous consequences of the same. The final images of the film, of refugees created by the United States trying to flee the country while ICE agents do their best to round them up for gulag and extermination, are unbearably topical. Logan is bleak, pessimistic stuff. Halfway through, Laura watches the end of Shane with Professor X. He tells her that this was a favourite of his as a child almost a hundred years in the past (not quite, but I get it), and the way he watches it indicates that he identifies in his twilight with young, doomed Brandon De Wilde ("Shane, come back!"). There's a theory I like that says Shane (Alan Ladd) suffers a fatal wound in his last fight with evil Jack Wilson (Jack Palance), and that just before the screen fades to black, you see the hero slump over on his saddle as he rides away. "There are no more guns in the valley" is the picture's promise that order has been restored, but at this great cost. Not for nothing, Laura, something of an auto-didactic sponge, uses it later in a surprisingly-effective eulogy for a friend. I am most taken by the relationship between Wolverine and his charge. A scene where she tries to hold his hand gets a bookend that feels exactly right. There's a lot of danger that this story of a grizzled old murderer and the little girl who helps him rediscover his humanity will fall into maudlin platitudes and false uplift, but it amounts to naught. And in fact the only time I felt any kind of frisson of fanboy excitement was when, on the way out of a convenience store where Laura almost kills the imminently-likeable clerk, our hero grabs a handful of cigars.

Logan is angry as hell. It is, like Girl, stern warning to tradition and the ruling class that their time in power is coming to a close. As marches fill the streets and calls for revolution happen daily, as things that were never thought possible in the United States become the new status quo, consider that in physics for every action there is an equal and opposite reaction. It's science, not philosophy. What Logan, Girl, Rogue One, and others of the last couple years, from this country and others (Mad Max: Fury Road, The Witch, Green Room, It Follows, February (i.e., The Blackcoat's Daughter), Hush, Her, Under the Skin, Under the Shadow, and on and on and on), demonstrate is that the resistance is coming largely from avatars of the traditionally-oppressed: women/minorities looking not to reclaim any sort of identity (making America great again means regression for every class but one), but to forge new identities from the rubble of these failed policies of exclusion, poisonous faith, and voracious, incestuous acquisition. The last great period in American film was the 1970s, when every pillar of what we trusted was called into question and recognized as corrupt. We're at the dawn of another, now global, period of artistic revolt. It's galvanizing. Really. It's fucking inspiring.