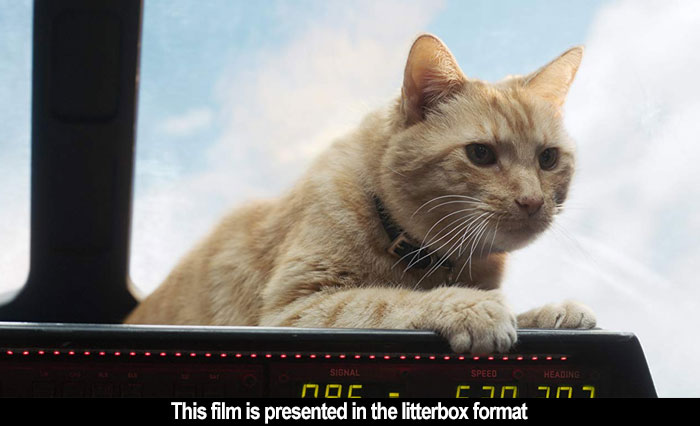 by Walter Chaw Brie Larson wished aloud for more diversity in the press covering Captain Marvel, and that, combined with the fact that Larson or anyone who looks remotely like her is clearly never going to sleep with them, caused any number of mediocre men to cry and bully the tedious things mediocre men cry and bully. When we talk about "ratios" in popular culture now, we're referring to the number of comments stupid "tweets" get in relation to the number of "likes" they receive--the dumber you are, the more comments you get telling you so. The other "ratio" germane to this conversation is the one provided by cultural anthropology, particularly Dr. Donald Symons, who proposes that the ratio between the most reproductively-successful woman and the least reproductively-successful woman is, you know, in the teens, while the ratio between the most reproductively-successful man (thousands) and the least (zero) is...well, there is no percentage. Anything divided by zero is nonsense.

Embedded in this biological verity is the root of sexual behaviour and object choice between the sexes. Along with the root of why whenever there's another mass shooting in the United States, the odds are great that it's a white guy addressing his sexual inadequacy through violence over a lover, past, present, or imagined. When fandom rises up, it does so on the backs of these biological losers who, aware that their precious and, alas, plentiful seed will never be spent on reproductive vigour, convert their lust into bile to be spat on whomever they now perceive are the gatekeepers of their only means to anything like status or power. What I'm saying in this lengthy preamble is that while Captain Marvel is just atrocious, it's also true that the incels slavering to destroy it, sight-unseen, are pathetic troglodytes who deserve the truncation of their ancestral line. It's important to hold these two ideas in mind simultaneously, but separately. Yes, Captain Marvel is horrible; no, it has nothing to do with any of the reasons sad little men have come up with as they digitally cosplay supremacy.

In the Marvel Cinematic Universe's very own Solo, Vers (Larson) is a Kree warrior who trains with Kree warrior Yon-Rogg (Jude Law). When I spell "Kree" with a "k," I mean it: these aren't the First Nations "Kree," they're mostly-green space aliens at war with shape-shifting lizard people called Skrull. As the film lugubriously opens like a corpse flower in a greenhouse, Vers is captured by Skrull leader Talos (Ben Mendelsohn) and has her memory probed, leading to a flashback to 1989 in which Vers is Carol Danvers, plucky test-pilot given to cheeky affirmations shared with her buddy (wait for it) Maria Rambeau (Lashana Lynch). Say it out loud. Yeah, baby, Maria RAMBO. Sick, right? Carol, see, was a human but is now Kree because reasons, leading to the whitest inspirational declaration I have ever heard when she says, summoning would-be iconic gravitas, "My name is...Carol!" (It's no "They call me Mister Tibbs!", but it's destined to be memed whenever some soccer mom calls the cops on a renegade lemonade stand going forward.) This is just one of many attempted moments of affirmation in Captain Marvel, with another coming when Carol robotically intones at Yon-Rogg that she doesn't need his approval--an assertion that essentially says his accusations of her being incapable of controlling her emotions are not only true but indeed the root of her strength. Not what they meant? Well, then, they had over two hours to be clearer; and why are you defending something that cost the GDP of a small nation to produce and advertise? Look, if one small girl is inspired by Captain Marvel, that's fantastic. When I was a small Chinese boy, I loved Condorman. I had the novelization and everything. Condorman is one of the two or three worst movies ever made. Captain Marvel is not just the worst MCU film, it's also the worst DCEU film--and, folks, I really hated Suicide Squad and Justice League. I'm glad Condorman exists because of what it meant to me, but Condorman, let me repeat, is terrible. I'm also glad that Captain Marvel exists, I guess, because real equality is when movies about women are allowed to be as bad as most movies about men.

Because of ridiculous things, Vers crashes into a Blockbuster Video circa 1994 and immediately pulverizes a True Lies standee. This is an interesting thing, because True Lies is a beautifully-directed film that is notoriously sexist, written and directed by James Cameron, who has produced a film out now vying for the same audience as Captain Marvel, Alita: Battle Angel. Alita: Battle Angel is a piece of shit, too, incidentally, but here's Vers dropping the gauntlet in a Blockbuster in a likely case of accidental meta-aggression. What fun. Vers then stalks around like a middle-linebacker in her Kree suit as the soundtrack is suddenly taken over by R.E.M., Garbage, and Nirvana--needle-drops executed with the grace and insight of people who don't understand that "Man on the Moon" should not be used as a literal backdrop for a conversation about where to resettle a persecuted alien race. Meanwhile, Vers starts wearing Nine Inch Nails and Heart paraphernalia, which should have been cool but mainly reminds in the harshest possible terms that the film this wants to be is Bumblebee. Man, was Bumblebee good, and, boy, did this trainwreck make me wish I were watching it again instead. Wait, that's not fair: trainwrecks are exciting. Captain Marvel is boring--like, punishingly boring. Its pacing is completely off, with Larson gamely driving Vers from icy automaton to squishy romantic, sometimes within the same interminable scene. The worst is a Louisiana reunion with RAMBO (fuck yeah!) where Vers's buddy tells her how smart and funny and brave she used to be. This is rhymed later with a moment where the Supreme Intelligence (Annette Bening) taunts Vers for being "too human" and Vers, Carol now, flashes back to all the times she absolutely bit it as a particularly clumsy child with maybe an inner ear thing, but (swell of music) fucking got back up again, you're damn right she did. RAMBO has a kid (Akira Akbar) who gives Carol lots of good self-talk as well by showing her a bunch of photos. The kid has another scene where she tells a Skrull child to never change its eyes because they're beautiful. That's right: in the middle of this mess, another mess, A Wrinkle in Time, re-erupts.

The fight scenes are terrible--choreographed and shot in such tight close-ups they're impossible to follow and therefore impossible to invest in. Hard to care anyway when everyone fighting is invulnerable except for Nick Fury (Samuel L. Jackson), who you already know is going to be fine. The narrative is composed of long, expository dialogue sequences meant to convey what Captain Marvel realizes it's completely failed to convey otherwise (relationships, pathos, stakes), and there's an entire subplot involving a deus ex machina housecat named after a dead Top Gun character that will delight people who spend hours looking at cat videos on YouTube. In a way that's entirely distracting, Jackson has been digitally de-aged--but only in the face, so when he finally gets to throw a punch it looks suspiciously like a seventy-year-old man not given to punching throwing a punch. What else do you want to know?

Captain Marvel was co-written and directed by the filmmaking team of Anna Boden and Ryan Fleck, who have never done anything to suggest they could carry off a major tentpole science-fiction/action film. Their best movie is their debut feature, Half Nelson, starring Ryan Gosling as an inner-city junkie teacher who forms a special friendship with one of his disadvantaged students. When I say "best film," I don't mean it's a great film. Still, Captain Marvel appears to have swallowed them whole. The characters are undeveloped, the outlines of this universe are vague and uninteresting, and the less said about the multiple attempts at humour, the better. In the interests of parity, every actor in the film is wasted except, probably, the cat, who in one scene is comically flattened by G-forces and in another gets imprisoned in a little laser cat carrier the bad guys just happen to keep with them for situations like this. I don't know if there were massive last-minute changes to the script, but if there weren't I have questions about why the movie plays like bad improv in its best moments, Calvinball in its worst. Consider a Voight-Kampff test in a bar at the midway point where Vers tries to figure out if Nick Fury is a Skrull: the vacuity of the questions, the flatness of the performance, the way a bartender drops a line and then disappears forever, and the punchline, which fails entirely to move the plot in any direction. It's a vestigial organ. No one knows why it's there; maybe it served some purpose in an earlier draft, maybe someone should've cut it out before it leaked into the body. The problem with Captain Marvel, though, is that every scene feels vestigial. Like, if each of your organs was an appendix. I'm no doctor, but the prognosis...yeah, it ain't good.