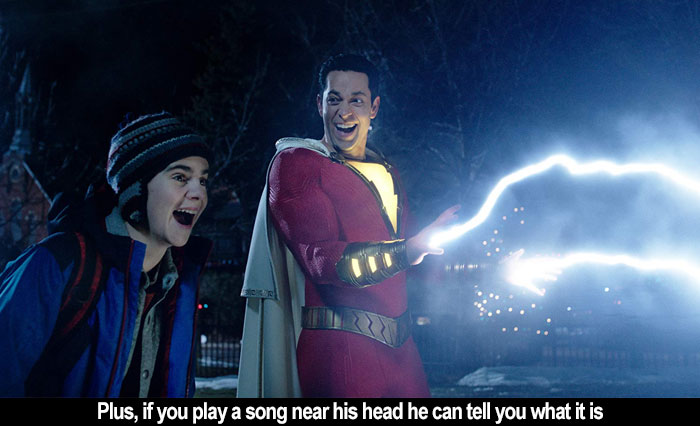 by Walter Chaw The thing David F. Sandberg's Shazam!, the Captain Marvel I actually like, has going for it is that, like the recent Aquaman (which it takes a jab at during a mid-closing-credits sequence), it doesn't take itself too seriously. Not to say that it doesn't tackle some heavy topics--foster children, domestic abuse, sexuality, race, disability--but that it does so with a kind of good-natured bonhomie that finds one of its kid characters (the Asian one) calling a couple of bullies "assfags." In that sense, Shazam! plays a lot like Michael Ritchie's The Golden Child: another fantasy film with a charismatic lead pitched at children but packed with stuff just over the line of appropriate. There are a couple of nasty murders in this cheerfully self-aware send-up of Big (note a memorable scene set in a toy store), and there's a perfectly-landed recurring joke about a strip club--neither of which, let's face it, as inappropriate as the pedophilia that serves as the emotional centre of Big. Shazam! is, in other words, a shaggy-dog superhero flick that happily checks several boxes while unapologetically indulging in its chaotic silliness. Funnier would have been if schlumpy Seth Rogen had played the adult Shazam rather than hunky Zachary Levi, but there's intellectual property to respect and all. A shame The Rock already did a version of this role in the Jumanji sequel. At least he's rumoured to be cast as Captain Marvel's arch-enemy Black Adam in some film down the line.

I say "a shame," but, really, Levi is great as the adult incarnation of young Billy Batson (Asher Angel), a foster kid abandoned as a toddler by his teen mom. One night, Billy is granted superpowers by the Wizard Shazam (Djimon Hounsou): Whenever Billy says "Shazam!" he turns into Shazam, the hero formerly known as Captain Marvel (Levi); it's a thing he and his foster brother, Freddy (Jack Dylan Glazer), parlay into beer at the local convenience store and a quick trip to a titty bar. That's brilliant. I love how, Chronicle-like, the two friends work on discovering and defining Billy's superpowers, and how, as in Glass, they use YouTube to cultivate a following for Shazam. What I really love, though, is a bit where Freddy shows Billy a smashed bullet that ricocheted off the body of Superman and is now kept in a plastic baggie with a certificate of authenticity. Shazam! understands fandom in a gentle way--and, better, it identifies Superman as a truly aspirational icon. The way the film continues to pay off this artifact speaks to where its heart is and functions as sly rebuke to the now-disbanded Zack Snyder DCEU. Although it calls attention to how redundant this Captain Marvel is in the same universe as Superman, it also shows how integral the movie's literal child-like centre is to distinguishing the character, conceptually, from Superman. I would go so far as to argue that Shazam!--and Aquaman--understand, crucially, that while the first couple of generations of comic-book readers and collectors are old now, it's important to honour the children they were when this material was fresh.

There's an arch-villain, of course: Dr. Sivana (Mark Strong), the evil child of an evil billionaire (topical!) who is really just the vehicle for seven deadly CGI sins and strongest when possessed by them. I'm sure there's a good theological read to this piece, but I'm not the one to provide it. Much of the non-jokey dialogue is obsessed with the idea of family and how you can choose them--or they, you. Billy's foster family is a multi-ethnic mélange of kids; they're not entirely convincing (nor free of controversy), though the effort is commendable. I would have appreciated it more if the Chinese kid (Ian Chen) weren't a technology-obsessed hacker, but whatever, he also gets to misuse nunchucks and say "assfags," so we're even, I guess. There's a possibly-autistic kid (Jovan Armand) who quietly declares that he's at least bisexual, and there's a little black girl (Faithe Herman) who gets a lot of cute things to say. Freddy is the star, however, the comic-book expert with a gimpy leg who at a critical moment remarks that having a disability renders him essentially invisible to other people. Shazam! is not a perfect film--there's something moribund about its early going, and while the gags are reliably fun, they're seldom all that original. What works is the picture's lightness. It's a lot like Sky High, a movie I underestimated at the time. This is the second DC production in a row to demonstrate a certain levity. Best for me, it's a hint that if they take another swing at Superman--and John Williams's score makes a quick cameo at a key point--they might finally hear the music again.