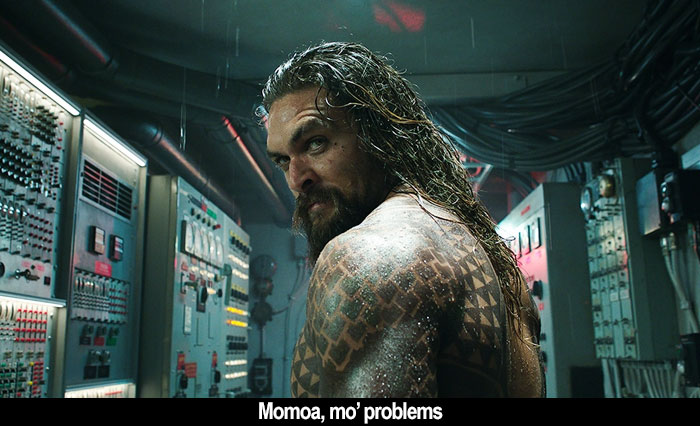 by Walter Chaw I don't think the DCEU was done any favours by the success of Christopher Nolan's exceptional Dark Knight trilogy, charting as it did a course of "grittiness" and topical social relevance that made the examination of its heroes' subconscious motivations the text rather than the middle to be teased out by generations of readers. When nerd culture took the bully pulpit, in many ways it took the mantle of being a bully, too. There is literally no way to review a comic-book movie without getting death threats: woe be to you if you don't like it--but if you do like it, you're probably not liking it in the right way. Making lockers to be pushed into virtual didn't, apparently, solve the problem of being a mediocre male looking to express dominance. There's a connection here to why comic-book movies about the troubles of sad white people are less and less current, while stuff like Black Panther, Spider-Man: Into the Spiderverse, and Wonder Woman are the tantalizing hope for a positive future. No accident that minority and marginalized filmmakers have found a way forward with this genre.

James Wan's Aquaman looks like a comic book and acts like one, too. When a beautiful woman wakes up on a strange couch after fleeing an arranged marriage and her kingdom's assassins, the first thing she does is eat a goldfish. It's underground, alternative storytelling for the disenfranchised and the bullied: spry, smart, bright, and so objectively beautiful it would deserve its bushels of cash even if it didn't have a teeming, rich subtext. It's an open rebuke to prior DCEU films--not to mention a few Marvel flicks--with its style, challenging a lot of preconceived notions around what made comics work in the first place. There's a face-off for the crown in the middle of Aquaman where an outsider challenges a king to the adoration of an assembled, tiered audience. Compare the way the picture handles this fight to the way Black Panther handles a similar fight: both are old rituals meant to reaffirm a patriarchy, but only one is sublimely stupid, outmoded, antiquated; Black Panther is an important cultural moment awkwardly beholden to a larger storyline. There's something going on in Aquaman that's going to be easy to overlook, but you shouldn't. Consider that the residents of Atlantis are overwhelmingly Aryan, so when Momoa's mixed-race Aquaman (a.k.a. Arthur Curry) is repeatedly referred to as "mongrel" and "half-blood," it lands with an almost distracting real-world resonance. They're talking about how his dad (Temuera Morrison) is a land-dweller, of course, but my mind goes to the think-pieces suggesting Aquaman should've been played by Ryan Gosling. When Aquaman's half-brother, King Orm (Patrick Wilson), wants to manufacture a pretense to wage a genocidal war from behind a heavily-defended border, it becomes easier and easier to understand our own state of affairs as comic melodrama.

Don't misunderstand: Aquaman is unapologetically fun. Really fun. Silly, campy, ridiculous fun that makes great sport of Jason Momoa's romance-novel-cover good looks--he flips his wet hair out of his face and glances over his shoulder come hither as his hero pose--and creates a dizzying, psychedelic underwater fantasia with an octopus playing drums and armoured prawns riding giant crabs into battle. There's also a conversation with an elder god following a battle with fish people that represents what is, to date, the truest and best visual and conceptual representation of the Shadow over Innsmouth, Dagon notwithstanding. Yeah, it's fucking cool. The movie has a keen sense of its own responsibility to the goofiness of its premise--of every one of these premises--and understands that this stuff isn't about Ayn Rand, but Ratatouille. Asked who he is by a final caretaker, a massive "Lady of the Lake" standing between Aquaman and an all-powerful Excalibur by way of a trident, he says he's "nobody," aligning this hero's ethos with Rey from Rian Johnson's The Last Jedi and both to Odysseus. They are eruptions of specialness from discounted genders and social classes and races, and they recognize their time as now and their identities as extra special because they're obscured and devalued by the ruling culture. This is the core of what comics used to provide for us. They were always political and, at their best, they were political on the side of these exact progressive ideals. Wan approaches it all with a light touch. Capping a scene in a bar early on where Aquaman's dad drinks him under the table is that old saw of a group of bar toughs spoiling for a fight--except they're actually after selfies, and over the course of a few snapshots we see Aquaman loosen up and lean into having a great time. It's a good description of the film's arc. Aquaman is the Thor: Ragnarok of the DCEU and here well ahead of schedule.

Aquaman, it's worth repeating, is gorgeous, the set-pieces across the various kingdoms of the underwater realm examples of artists allowed to not just hew close to the messed-up source but indulge in their own inspirations as well. When Willem Dafoe's Vulko, sort of an aquatic Duncan Idaho, arrives on the scene riding an enormous hammerhead shark, you know what kind of movie this is going to be. It's extravagant, huge-canvas filmmaking. Yet at the heart of it and what lingers is the story of how Aquaman's mother, Atlanna (Nicole Kidman), having spent a few years of bliss with her land-bound lover, is dragged back to her people and forced to sire a male heir, after which she is murdered by a jealous husband for the crime of, essentially, miscegenation. It's this story that drives the piece--not villain Black Manta (Yahya Abdul-Mateen II), who builds his suit to a Depeche Mode song, nor really the plot of the Seven Seas to destroy the rest of the world. No, it's this story of a mixed-race kid living with the knowledge that his mother was killed by a race of people who did not approve of his father and certainly don't approve of him. It explains, if explanation were necessary, Aquaman's distaste for recognition and reluctance to have anything to do with either the culture he's adopted or the culture that has violently disowned him. The tension between his desperately wanting to be accepted somewhere and the harsh reality that he fits in nowhere is as pithy an examination of what it's like to be a hyphenate nationality as I've ever seen. This or Shaun Tan's The Arrival. Aquaman's constant taking-the-piss now looks like a defense against further injury as opposed to the bro-culture posturing of Justice League. It's not superiority, it's yearning. He wants to be accepted in Maryland as much as in the Kingdom of the Brine. In the end, when he is, it feels like a bigger triumph than just saving a comic-book cinematic universe. Though he has done that, too. I never noticed it before, what a cool thing it is for Aquaman to wear yellow.