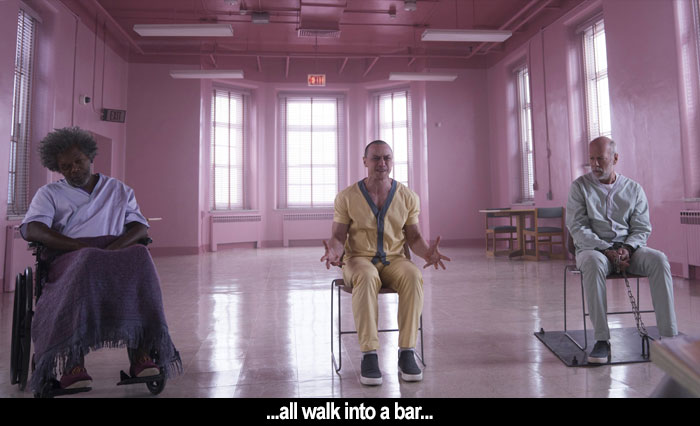 by Walter Chaw SPOILER WARNING IN EFFECT. Glass is really only about two things, but they happen to be the two most urgent things we have to talk about in 2019. It's about gaslighting--how people in positions of power lie about plain fact until the truth becomes a political theory. And it's about a cabal of white elites interested in maintaining the status quo at any cost. Late in the picture, someone says they're not "for" right or wrong, just ten thousand more years of same. The correlation to entrenchment Democrats who are as driven by self-interest as entrenchment Republicans is spot-on and devastating. The reaction of the Establishment Left to someone like Alexandria Ocasio-Cortez--who, after all, never says anything remotely controversial to the majority of Americans--reminds that Trump would never be President if it weren't for the complicity of an entire ossified system that is at the end also not interested in right or wrong, just same. This country is not red and blue, it's grey.

Just the fact of Glass and the story of M. Night Shyamalan's escape from movie jail with an effective, self-funded thriller (The Visit), then a companion piece (Split) to one of his most cult-beloved films (Unbreakable), now this sequel to both Split and Unbreakable, is validation of the overriding thesis presented here in Glass of how "same" is stagnation unto death. It's a smart, independent, poison pill of a political satire miles away from what one might have expected from someone feted twenty years ago to be both the next Spielberg and the next Hitchcock. What Glass reminds of most is Francis Coppola's exceptional Youth Without Youth--another "late" film from a once-respected filmmaker fallen on tough times. Rough around the edges but energized with ideas, these movies feel like products of younger, nervier creators. Liberated from commercial expectations and brand guarantees, artists sometimes find a little of the old magic in that freedom.

In many ways, Unbreakable is the movie that made Christopher Nolan's Batman trilogy seem like a good idea. At the least, it's one you could point to as the headwaters of our current flood. It took comic books seriously, treating them with an arthouse brush and a prestige filmmaker's (self-)reverence. Since its release, there's been a wave of creators reared on comic books and nerd culture and ready to see Alan Moore and Grant Morrison adapted across every medium: soul-weary and drunk on their German operas alive with warrior women and übermenschen. When I first saw Unbreakable and noticed the Fantastic Four logo used as the logo for an in-film television channel, I felt elated and recognized. Shyamalan has a strong take on comic books, their whys and hows, and he's uncompromising in playing out his theories. In this universe, outcasts turn to comics in search of outcast stories. They live out fantasies of conquest and vengeance through them; they see in them the mythology to explain their specialness and secret conviction that there's meaning attached to their loneliness. There's a beautiful painting in the middle of Morrison and Dave McKean's graphic novel Arkham Asylum I'm thinking of that depicts the Joker holding up a Rorschach blot for Batman, who's only able to see a giant, terrifying bat. Comics are conduits into the subconscious. The movie's heroes are Oedipal detectives, searching for themselves through a series of surrogates and controlled situational exercises. Their constant cycles of death and resurrection are like Prometheus's torment for bringing light to his creations.

In Glass, comics and the conversation around them is the means through which major plot points and revelations happen. It's how Joseph (Spencer Treat Clark), the now-grown son of David Dunn (Bruce Willis), understands what he's supposed to do; how Dr. Ellie Staple (Sarah Paulson) finally deduces the fiendish plan of Mr. Glass (Samuel L. Jackson); how Casey Cooke (Anya Taylor-Joy) embraces her role in a play that predates her and will continue on once she's gone. Dr. Staple, who has captured David, Glass, and The Beast (James McAvoy) and is working on convincing them they're nuts, presents the maddeningly reasonable, slow-burning tension. The case against the previous film, Split, is the idea that Casey's "superpower," which allows her to survive an attack from The Beast, is the trauma she incurred as an abuse survivor. My read of the Casey character is that it is her experience of trauma and abuse that allows her to understand the unpredictability and violence of her tormentor better. If The Beast hunts on the basis of being able to identify trauma, it opens up an interesting conversation into how the kind of 'roided-out alpha male The Beast represents hunts using the same criteria. Dangerous territory.

One of my favourite poems is William Yeats's "Leda and the Swan." In it, Yeats speaks of Leda's rape by Zeus as terrifying--then speaks of how the product of that rape, Helen, represents Leda taking on Zeus's power. Reading Casey at the end of either of these films as "identifying" with The Beast and thus saving him is odd to me. There's not much that separates how Marvel's Black Widow (a victim of sexual trauma) "soothes" the tumescent Hulk and how Casey diminishes The Beast. My favourite example of this in the reverse comes in The Texas Chainsaw Massacre 2, when Leatherface's chainsaw goes "limp" trying to cut through a block of ice, and a comely DJ strokes it back to life. Casey soothes the savage Beast so it can be controlled. Fay Wray and King Kong. Politically, consider the central tension in Hancock, in which an interracial couple loses their powers of invulnerability when they're together. Casey works through her trauma by exorcizing her demons: seeing these male monsters as pathetic not in spite of their violence, but because of it. In the third--and, I believe, best--Alien film, Ripley is warned by one of her fellow inmates that she should sit somewhere else to eat because he is "a murderer and a rapist of women." Ripley says, "Then I must make you really nervous," and sits down. Anyway, Casey's character in Glass is fascinating to me because I know that a good portion of it is opaque and my read of it is maybe antiquated.

Glass is a defense of antiquated notions, I suppose. David is the white saviour; Glass is a black man everyone should fear; The Beast, housed in a body stuffed with dozens of other personalities, is a nightmare for those seeking to avoid stigmatizing mental illness and even transgender identities. Yet David is also a survivor who is largely incapable of communicating with his son and spends his nights battling viral-video hooligans. Glass is constantly underestimated for his vast intelligence because his physicality (that portion of a black man most venerated by the ruling culture) is compromised by brittle bones. And The Beast is seen as the product of a mental-health system that has no solutions for the profoundly disturbed. Each of his other personalities is a treatment strategy--regression therapy, repression, reality testing, dialectics--and none of them, ultimately, work. Glass is slippery. In the end, Shyamalan makes the unprecedented decision to kill everybody and reveal that the goals of psychiatrist Dr. Staple are first to gaslight people who are extraordinary into thinking they're not ("It's the most humane method," she says), then to extinguish them should the gaslighting not work. She's not evil, she's the representative of benign mediocrity. If ever given a supervillain name, she and her group of theme-restaurant meeting, SUV-driving, prep-schooled Chads and Beckys would be Status Quorum. It's the tediously-privileged, after all, who benefit the most from nothing changing.

Which brings us to Alexandria Ocasio-Cortez and her freshman group of young, diverse, female Congress members--masters of social media (and the last sting of Glass is how social media will play a role in identifying the next generation of supers), carriers of the hopes of the majority of folks in the country who reject the sameness doctrine of white supremacy and intolerance. They will probably be either gaslit or destroyed, because it's what the system has done since long before Mr. Smith Goes to Washington--but maybe not. Or maybe before that happens, they'll wake up others with the possibility that things don't always have to be the same or worse. The status quo understands it needs to quash inspiration because inspiration breeds the inspired. Glass is extraordinarily transparent in its politics and, in that, honours comic books most of all. Comics challenged racism and social norms throughout their history, played a significant role the first time the KKK began to lose its hold on the middle of the United States, and found in "X-Men" a title wholly empathetic to the plight of being "different" in a world invested in codifying its revulsion of difference, no matter the cost to itself. Glass offers an explanation for Trump in the very sympathetic desire by many to see the current state destroyed, whatever the price, and it offers hope for a way to root out the cancer of institutional mediocrity without also killing the host. It's a warning and a call to action. Keep your eyes clear, because you're the target of all that gaslighting: the beginning of Night of the Living Dead and the end of the first Invasion of the Body Snatchers. They're coming to get you. And they're already here. But maybe you're the hero we've been waiting for. How will you know until you stand up? So stand up.