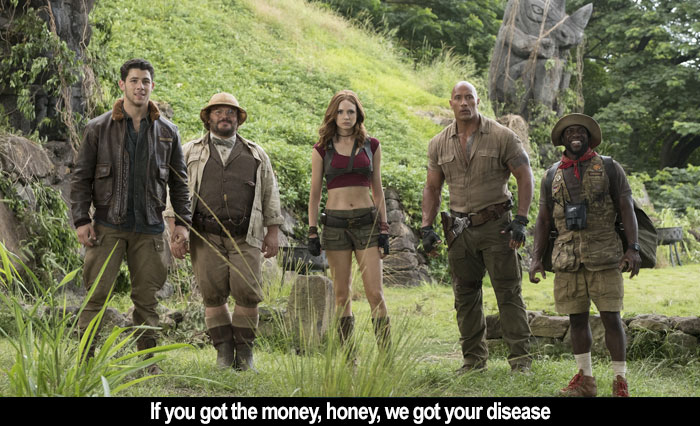 by Walter Chaw Inexplicably named after a Guns N' Roses song, Jumanji: Welcome to the Jungle (henceforth Jumanji 2) is a deeply problematic film that castrates its smartest ideas in order to please the broadest possible audience on opening weekend before dragging itself off somewhere to show up in a Redbox in a few months' time. Start with Kevin Hart--reunited with his Central Intelligence co-star, Dwayne Johnson--playing a porter, essentially, in a jungle adventure. Which, you know...what the actual fuck? I'm sure it means well, and Hart's threadbare shtick of being short and put-upon certainly fits the situation, but there's opportunity here, should director Jake Kasdan have chosen to take it, for Hart to comment on how degrading it is for a star of his stature to be appearing in a movie as Bagger Vance. He doesn't seem to notice there's baggage related to his playing a character who essentially carries a bag and hands weapons to the hero. He complains about it, though mostly he complains about not being able to run very fast and having one of his avatar's weaknesses be pound cake.

In the prologue, the board game from the original Jumanji is discovered on a beach and brought home for a kid who doesn't play board games, but does play 64-bit console games on an unidentifiable platform that starts out as a PlayStation, but morphs into something else for no real reason. As a geek exercise, sufficed to say the film messes up some details. Twenty-some years pass and the Breakfast Club finds itself in detention. Nerd king Spencer (Alex Wolff) used to be the Betty Finn to hulking football player Fridge (Ser'Darius Blain) but is now relegated to ghostwriting Fridge's papers for him because black athletes are illiterate cheaters. They're in detention because they got caught. Also in detention are post-Heather bimbo Bethany (Madison Iseman), who takes desultory selfies and makes calls during class complaining about how her jock ex-boyfriend hasn't liked them on Instagram; and nerd queen Martha (Morgan Turner), who gets tossed in the proverbial slammer for telling a gym teacher she should've maybe been more careful in her life choices. The thing about The Breakfast Club that was sort of interesting is how the Heather hooked up with the delinquent and the nerd queen hooked up with the jock as they all discovered they were equally brains, athletes, basket cases, criminals, and princesses. The thing that's interesting about Jumanji 2 is how it doesn't try very hard to suggest the same.

Anyway, these sometimes-offensive types get sucked into the Jumanji videogame and show up in a jungle as different sometimes-offensive types: Dwayne Johnson (now Spencer), Kevin Hart (Fridge), Jack Black (Bethany), and Karen Gillan (Martha). Martha wonders aloud why she's in the jungle dressed in a cropped halter and leather short-shorts but spends the rest of the film not changing her appearance. I want to believe the hyphenate behind Zero Effect is smart enough to know that noticing something is not the same as subverting something, but that Jake Kasdan was almost as long ago as the first Jumanji. Black does a mincing drag imitation of a teen-girl caricature and scores a few good moments marvelling at both the utility of his penis as a "handle" and, later, the miracle of erection. Fridge, in case you're wondering, confirms that his penis is as outsized as his real-world version, because black men have large penises even when they're Kevin Hart-sized. I don't want to imply that Jumanji 2 is terrible because it's pandering and cheap--rather, it's because it's clear it knows how it could've been pretty good yet settles for being pandering and cheap. In other words, you can only get so mad at a Michael Bay film because Michael Bay is a reptile.

Our heroes run around the jungle, chased by demonic explorer Van Pelt (Bobby Cannavale) and his Mad Max stunt team on a quest to return an emerald to a giant jaguar statue. They each have three lives; some rules get shifted around; they run into the kid from the intro, who in the game is Nick Jonas and in real life is [redacted]; and there's never any sort of peril or sense that Jumanji 2 is going to be courageous enough to address the issues it raises. There are massive problems in representation in film that are echoed and magnified in video games. While I understand that any redress of those issues results in ugly threats and vile threads on social-networking sites, Jumanji 2 is uniquely situated to address some of that shit nested in there at the heart of fandom but instead relies on the familiar and the well-trod. It is exactly what it seems to be: an obsequious waste of time that feels like a relic from twenty years ago and will be forgotten almost immediately. It's not even worth this conversation.