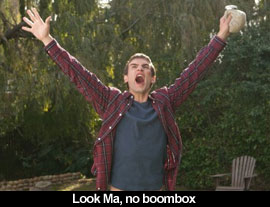 Josh Trank and Max Landis's Chronicle is so good for so many extended stretches that its flaws are all the more frustrating. It's too smart for its own good, presenting a superhero origin story without allowing any of its characters to ever once even whisper the word (a lot like "The Walking Dead" making everyone look like assholes by avoiding the term "zombie") and spending too much time letting its teen titans drop names like Schopenhauer before making it clear that the character who most embraces the philosopher's theories of aesthetics and self-abnegation ultimately takes up the mantle of one of Schopenhauer's offshoots, Nietzsche. Boring, I know. And not smart enough, as meta-introspection goes, to bridge the gaps in Chronicle, like a badly under-developed "hero" and an equally under-developed "villain," their relationship to each other, and, at the end, an emotional coda that feels unearned and tacked-on. Compare Chronicle to what history is vetting out as the only good M. Night Shyamalan flick, Unbreakable: it's missing that film's sense of awe, sense of (what has come clear as exceedingly rare in Shyamalan's pursuits) respect for what the hero mythology of comics means, and has always meant, to 98lb. weaklings indulging a fantasy of largesse and empowerment and thus primed to order the Charles Atlas Workout off the ads on the back page.

That's the bad. The good is when loser Andrew (Dane DeHaan), his cousin Matt (Alex Russell), and Matt's popular buddy Steve (Michael B. Jordan) touch a mysterious space thingy and discover they've acquired telekinesis. They experiment with it in sequences that at times resemble an updated Zapped! and at others the best episode of "The Greatest American Hero" ever. They lift cars, learn to fly, invoke the name of Tim Tebow (which resulted in a rousing cheer at the Denver screening), and then, one night after a series of humiliations at the hands of the First Girl, a lack of universal health care, and a drunk and abusive father, Andrew the loser decides that his powers grant him the status of "apex predator" and the moral imperative to run amuck. A "found footage" production shot as a gimmick from the POV of Andrew's camera, credit a bit where Andrew, in the middle of a rampage, realizes that his best friend (the camera) is gone and so requisitions every spectator's smartphone and iPad, creating a battery of digital mirrors through which to admire himself.

Wanting to be about "hubris" (which it invokes awkwardly and without a complete understanding of the term) and the role of absolute power in corrupting absolutely (want more? Plato also said something about the measure of a man being what he does with power), wanting to be about the struggle to distinguish black and white from shades of grey, Chronicle only really resonates when it cuts the bullshit and focuses on the pain of bullying and the essential Sadean hell of High School for a significant portion of its victims. It's wonderful when it diagrams the speed with which destructive gossip spreads in that environment--particularly with the introduction of cell phones and social media--and it soars, occasionally literally, when it diagrams exactly how difficult it is to deal with a broken person, whether or not it's their fault. It flirts with transcendence in its images and ideas. A moment captured on a hospital surveillance camera involving a second camera and then a sudden concussive force outwards is great, as is a moment soon after that sees something emerging into the public eye after an entire film of secrets and what's hidden. If it doesn't, finally, have any kind of emotional heft, more's the pity, because within Chronicle are the seeds of something truly wonderful instead of this thing that's just good enough to be not good enough. All things being equal, I'm looking forward to the sequel.-Walter Chaw