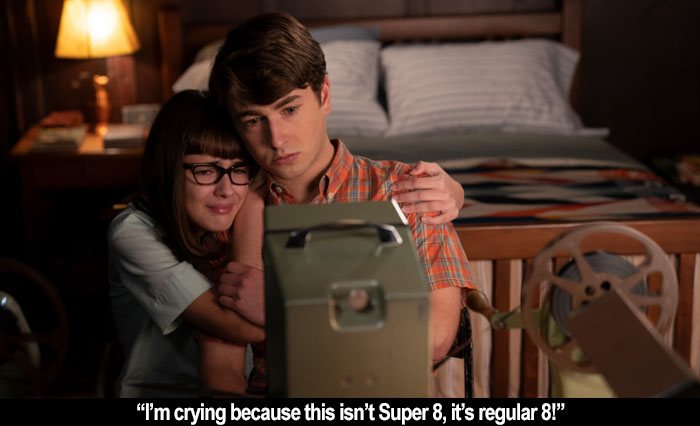 by Walter Chaw Sammy (Gabriel LaBelle) loves making movies. He loves it so much there's a chance he'll destroy his family because of it--showing things that aren't for public consumption, mishandling the power of the medium, underestimating the magnitude of his gift. We know this because there's a scene where Sammy, while editing raw 8mm footage of a family camping trip, notices his mom, Mitzi (Michelle Williams), getting a little too friendly with family friend Benny (Seth Rogen). He cuts all the incriminating clips together into a mini-reel he projects for Mitzi against the wall of his closet as explanation of sorts for why he's sullen lately, and maybe as punishment for Mitzi, who has just struck him out of frustration. We know this, too, because his obviously insane grand-uncle, ex-lion tamer Boris (Judd Hirsch), has warned him, in a movie-stealing bit of scenery-chewing, that the tension between art and family always ends in tragedy. We know this, too...uh, too, because it's ventriloquized through the mouths of more than one character, including Sammy's bully, Chad (Sam Rechner). Word for tortured word. There are more monologues in Steven Spielberg's The Fabelmans than there are dialogues--more peaks than mountains, as it were. More waves than ocean. I don't know why everyone in this movie talks like either a greeting card or a diagnosis, though I think it probably has to do with Spielberg wanting to excavate his past and, in the exhumation, to find easy and uplifting bows in which to tie his various strings. We all want that. I feel for him.

I consider Spielberg the finest technical director in the history of modern motion pictures. He is a savant who nonetheless lacks the emotional muscle to land a down ending with any consistency. When he does succeed, as in the loosely-disguised parental abandonment and abuse subtexts of Close Encounters of the Third Kind, he makes a masterpiece. Frankly, he's great enough as a filmmaker that even tacking sentimental endings onto Schindler's List, Saving Private Ryan, and Philip K. Dick diminishes the perception of his seriousness but not the importance of those films. With The Fabelmans, Spielberg seems to be providing an explication for his soft touch. He's incontrovertibly gifted by a light that shines so brightly and burns so hot it hurts people. The film opens with Mitzi and Burt (Paul Dano) taking their wide-eyed naïf to see DeMille's The Greatest Show on Earth in search of a good-time family circus and bearing witness instead to a heist, a bludgeoning, and a horrific crash that results in a massive derailment. Later, the kid insists on getting his own train set, the better to destroy it over and over again in a Freudian "Repetition Compulsion" to redress the trauma of what he's witnessed. We know this because it's what Mitzi tells Burt, using it as a rationale for buying Sam his first 8mm camera so that he can crash the train on film, watch it over and over again, and spare his toys further indignity. It's easy to hit Spielberg for leaning on John Williams's expository scores too heavily, but he's never, until this moment of being cerebral about his process, leaned this hard on just stating the obvious. I say "stating," but I really mean "bludgeoning," because (John) Williams provides another expository score for The Fabelmans that is now not only speaking the emotions of a scene but also magnifying characters who are also speaking the emotions of a scene.

No points for trainspotting the movie's various references to a body of work that is among the most viewed and beloved in the history of cinema. No points because it's not a game anymore when the answers are hidden in plain sight. (The word for a game in which the host gives you the answers is "condescending" or "patronizing.") I have always found it disrespectful that Spielberg refuses to kill the son in War of the Worlds, that he commissioned a "cufflink" speech to amplify atrocity. But The Fabelmans has no faith that anyone in its audience is even vaguely interested in doing some work. I loathe movies like this. Movies like this win Best Picture. But there is something peculiar about The Fabelmans to unpack--something Spielberg might be revealing without knowing he's revealing it. It's his casting of Paul Dano and Michelle Williams as his parents, then asking them to be these obscene alien simulacra of human beings. Dano plays George McFly pre-adjustment, while Williams plays Shelley Winters or Shirley Knight, or Karen Black on the verge of a nervous breakdown. What these performances reveal about Spielberg's relationship with his parents is jagged and fascinating. In his eyes, his dad is a brilliant engineer and problem-solver who cannot figure out that his wife is cheating on him with his best friend and decides the best way to save his marriage is to move his family across the country. In Spielberg's eyes, his mother is an attention-seeking child, an unhinged exhibitionist given to manic outbursts: impossible highs and then deep-blue depressions. He pegs her as selfish, so Mitzi monologues about how she is selfish. He pegs his dad for a coward, so another character rails at Burt for caring only about running away from Mitzi's infidelity. And then this director, this fucking genius, who has captured some of the truly great family meals on film, who has never, in my memory, had performances in his film this stilted and artificial unless they were literal robots, instructs Dano and (Michelle) Williams to be another Freudian concept: unheimlich.

"The Uncanny," in Freudian terms, is a way to understand repressed trauma from childhood in the form of the resurfacing of beliefs thought to be outgrown. I think in the unbelievably strange Burt and the similarly perverse Mitzi, Spielberg is exposing the real work of his unconscious in trying to work through his baggage. I also think the reason A.I. is as extraordinary as it is has everything to do with his desire to relive a single day of a lost childhood--that maybe his entire career has been devoted to the manufacture of a Toynbee Convector. No accident that A.I. is about creatures that look like people but are not people and who are, in fact, repulsive. Burt and Mitzi live in the same Uncanny Valley. They are as half-formed and representative as a CPR dummy or a sexual-assault doll. Point to where the director's been hurt; practice resuscitation techniques on a piece of plastic that isn't alive and never will be. The Fabelmans is a work of graceless intention that has about it an element of unintended subtlety and depth. I don't know what to say about that except what I've already said: Spielberg is an extraordinary technician. There's a fight scene near the end between three kids in a high-school hallway that is filmed so perfectly it could, as Orson Welles once said of Make Way for Tomorrow, make a stone cry. The movements are effortlessly natural and still elevated somehow. The camera is always in the right place to capture reactions, to telegraph punches and then to land them with weight. Astonishing. And because Spielberg knows what things are supposed to look like and how things are supposed to act better than essentially anyone who has ever shot a movie, that Paul and Mitzi are so fucking weird tells me a lot. But not on purpose. The Fabelmans is what it looks like when Spielberg is out of control. I don't think I've ever seen that before. I don't think I ever want to see it again.