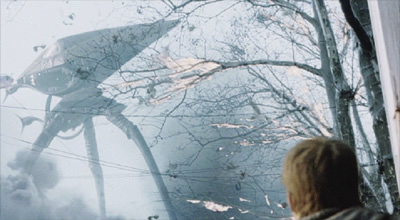 The film has a moment in a wood where ash and clothing starts raining, ghostly, from the sky, and another where a passenger train on fire hurtles through a crossing, alight with the fury of atrocities past and future. It is pure rapture for long stretches, a kinetic tribute to the great paranoid, joyously-nonsensical science-fiction of the 1950s (it's stupid, but it's awesome!) that, alas, similarly lacks the stones to have Dana Wynter wake up a pod, or have Klaatu declare us a lost cause. War of the Worlds is one stunning moment after another: any ten minutes of it is indisputable showcase material. But they're just runaway set-pieces hooked to a thematic nothing, a disturbing suggestion that for all the things we've lost then and now (thousands of brave soldiers, thousands of neighbours we didn't know), we haven't lost anything. It's neither satire nor a critique of being disconnected, but rather a disconnected film. A celebration of splendid isolation in which a billion people die so that Tom Cruise can become a better daddy.

He's Ray, the world's shortest blue-collar dockworker and a bad dad to troubled Robbie (Justin Chatwin) and precocious hypochondriac Rachel (Dakota Fanning). Ray is divorced from pregnant (natch) wife Mary Ann (Miranda Otto), who leaves the kids with him for a weekend while she visits her parents in Boston. Why the kids aren't invited isn't as important as the fact that because this is a Spielberg film, the true tension is whether Spielberg will kill the grandparents when the hammer falls or have another of his patented dewy-eyed denouements where the hero hugs the pregnant wife in front of generations of approving upper-class kinfolk. Opening with Morgan Freeman doing more homey voiceover work that contextualizes an anachronistic white hero (Tim Robbins has an extended cameo, digging another winking Shawshank tunnel--and the self-reference continues when the evil ETs play with a bike), aliens come calling, riding giant ATATs dubbed "tripods" in what seems more like a nod to paparazzi than it does fidelity to previous tellings of the story. (Likewise, the camcorders that don't stop working once an electro-magnetic pulse wipes out every other form of electrical appliance. (Although it makes no narrative sense, by framing the initial scenes of carnage through the miniature screen of a digital camcorder, Spielberg threatens to exhibit self-knowledge about the remoteness of the film.)) The scenes of havoc are gritty and expert--Spielberg doesn't take vaporizing populations lightly, but by the same token, in sparing the characters we care about, he doesn't take it very seriously, either.

The best scene in the film unfolds on the side of a hill as the National Guard rushes to what they know is their doom just to give a fleeing populace a few extra moments of flight. Robbie is determined to join the rush, Ray is determined to stop him, and Spielberg allows the soundtrack to overwhelm the dialogue so that all that's left is a father trying to keep his son from throwing his life away in a war he knows he'd be fighting if he were a younger man. It's a timeless moment in a film full of the most purely cinematic moments of any this year, a picture that flirts, like Batman Begins, with the idea of our heroes being born underground along with our fears--shoved into our subconscious by the oppressive spirit of this age. But then comes the ending. The H.G. Wells novel is home to one of the great cop-outs in history (and if you haven't read it or seen the 1953 George Pal/Byron Haskin version, you should stop reading now), as the common cold kills the invaders (wouldn't superior beings possess knowledge of microbes and inoculations?); the problem isn't solved by Spielberg's film despite that the use of biological weapons would've found a cozy home in a film that is essentially about 9/11. In fact, if you look at the picture as a 9/11 allegory, then it's safe to call this conclusion glib and insulting.

But the real problem of this War of the Worlds is Spielberg's absolute inability, at least since the magnificently cynical close of Close Encounters of the Third Kind and with the exception of Catch Me If You Can, to conclude a film without a Hallmark moment. I lately want Spielberg films to reveal themselves as ironic fantasies--I want Tom Cruise's character in Minority Report to be in a tube dreaming of a happy ending instead of rubbing the belly of his knocked-up wife for real. And so when Ray arrives in Boston to see his family alive and well and languishing, completely unshaken, in a brownstone with no explanation of how the world could be flattened except for this 'burb, I wanted, badly, the scene where Ray wakes up, hooked to a machine with a horde of aliens probing him in an L. Ron Hubbard fever dream. Spielberg is the only one who can mess up a Spielberg film. That a filmmaker of his calibre, his non-paraleil skill within the medium, has only made a handful of indelible films (even if he's responsible for a multitude of indelible moments), speaks to how often he simply can't help himself. War of the Worlds is A.I. is Minority Report. I've never seen their equal until their finales, and then I've seldom felt more disappointed and betrayed.

THE BLU-RAY DISC
by Bill Chambers Paramount/DreamWorks bring War of the Worlds to Blu-ray in a straight port of the 2-Disc Limited Edition DVD from 2005. Since I'd only reviewed the single-disc release back then, here's a brief rundown of the bonus material (all of which is presented in pillarboxed standard-definition), starting with the cursory "Designing the Enemy: Tripods and Aliens" (14 mins.). Therein, the likes of Doug Chiang and Dennis Muren--ILM refugees, both--touch on the various philosophies behind War of the Worlds' visual effects. Producer Kathleen Kennedy obliquely suggests that John Sayles's screenplay for Spielberg's abortive E.T.-meets-Poltergeist project Night Skies was strip-mined for War of the Worlds, but like most of the interesting topics broached it's a tangent left unconsummated. "Revisiting the Invasion" (8 mins.) finds Spielberg rather curiously calling this misanthropic film a post-9/11 celebration of people banding together to defeat a common enemy. Screenwriter David Koepp floats a more interesting notion: that Cruise's character in War of the Worlds is the actor's '80s persona aged into the irresponsible man-boy a Maverick would inevitably become. As an aside: the obligatory spiel about the metaphorical value of alien-invasion stories made me realize that America represents "Earth" in 99% of them.

"The H.G. Wells Legacy" (7 mins.) interviews descendants of the eponymous author, grandson Martin (who calls Wells "the first writer to cash in on a science education") and great-grandson Simon--then fresh off his own Wells adaptation as the director of DreamWorks' misguided The Time Machine, a topic gingerly sidestepped. "Steven Spielberg and the Original War of the Worlds" (8 mins.) mainly focuses on the shoehorned-in cameos by Gene Barry and Ann Robinson, stars of the 1953 War of the Worlds, while "Characters: The Family Unit" (13 mins.) freezes in time Spielberg and Cruise's no-longer-mutual appreciation society. Also, Justin Chatwin, whose career appears to have stalled in first, seems like kind of an airhead. "Previsualization" (8 mins.) features the disturbingly incongruous sight of Spielberg pushing pencils as he plots action sequences using animated storyboards. He says he wishes he could've had this tool circa Close Encounters of the Third Kind, but let me ask you: which movie turned out better?

By far the best extra is the four-part "Production Diaries" (92 mins. in toto), which covers in separate instalments the East and West coast halves of principal photography. For supplementals producer Laurent Bouzereau, this is a relatively in-depth, fly-on-the-wall making-of with some great insights into the artistic process, like Spielberg and DP Janusz Kaminski testing different-coloured lights to be emitted by the Tripods. (In the process, they discovered that turning a white light on and off repeatedly naturally produces a flash of "otherworldly" green.) Admiring a soundstage dressed as a farmhouse exterior, Spielberg laments the increasing rarity of practical sets--they get his creative juices flowing like nothing else--and insists he could never shoot entirely with greenscreens, something I don't think he intended as a swipe at George Lucas but it could certainly be read as such. I already covered the next piece, "Designing the Enemy...," below, and haven't much to say about "Scoring the War of the Worlds" (12 mins.), though its B-roll was shot by Spielberg himself on John Williams's scoring stage. "We Are Not Alone" (3 mins.) is actually a credits scroll, prefaced by a nice anecdote from Spielberg's childhood that inspired a considerably more nightmarish tableau in War of the Worlds proper.

I wrote the following when I reviewed the Blu-ray release of Spielberg's Minority Report last month and believe it's just as relevant to this similarly grainy and modestly-saturated 1.85:1, 1080p presentation: "...[T]he veil of grain and muted colours won't appeal to everyone, but beyond their aesthetic appropriateness, I believe they have a very practical application in roughing up the CGI." This film's VFX imagery has barely aged at all, with the exception of the vaporization effects: it's not that they've dated so much as they are mismatched as the most heavily- manipulated and compromised shots in the whole thing and look inordinately soft in HD. Black level is dense but doesn't crush, and the introduction of the red weed has more of that Wizard of Oz-ian transition-to-Technicolor irony Spielberg was going for than it does in SD. I'm inclined to be less hyperbolic about the 5.1 DTS-HD audio than I was about the DTS track of the DVD: the mix still cooks, but Saving Private Ryan's bests it on Blu-ray. Sometimes it even struck me as a little shrill--apart from when it was intentionally so, I mean. The movie's memorable teaser trailer rounds out the platter in HD and Dolby Surround. Originally published: May 31, 2010.