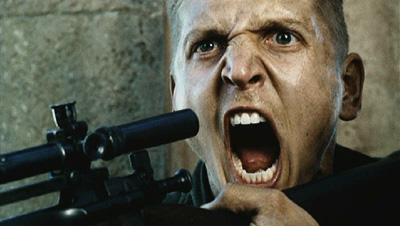 Still, Spielberg mishandles the flashback conceit by framing the body of Saving Private Ryan as the memory of a character who is only an active presence for a third of the film, and the visual that cues the past--an extreme close-up of Harrison Young's glassy-eyed stare--is clumsily rhymed a few beats later with an identical shot of Tom Hanks. (Similarities extend beyond the framing: I was once positive that Hanks' eyes had been composited onto Young's face.) Clearly premeditated, with Young revealed to be playing Old Private Ryan (i.e., an elderly Matt Damon), it turns the ending of Saving Private Ryan into a pointless and detrimental reversal of expectations. Such games belong in the parlour, and only serve to dehumanize the lambs that Spielberg successfully labours to ensure occupy three-dimensions on their way to slaughter. When we return to Young, it's in a morph-dissolve from Damon's face, a transition tainted with disappointment on initial viewing if you 'guessed wrong.'

Saving Private Ryan appears self-flagellating if we choose to recognize Pvt. Ryan as the Spielberg surrogate. Other obvious options include Jeremy Davies's Cpl. Upham, the interpreter who wants to write about the bonds of war without actually forming any (that is, without engaging in combat), and Pvt. Stanley Mellish (the comic actor Adam Goldberg), a cocksure American Jew. Emulating the moment from Schindler's List where a little girl screams "Goodbye, Jews!" to the procession of Warsaw captives, Spielberg has Mellish spitefully point out his Star of David to a file of German prisoners, an action that makes Mellish's stark comeuppance at the hands of a German soldier feel like an articulation of Jewish guilt. (Mellish is almost literally hoisted on his own petard in a hard-to-watch scene.) But the desperate-to-prove-himself Ryan is most likely to serve as an artist's salvation, for it's through him that Spielberg asks the tough questions about legacy. ("Tell me I was a good man," Old Ryan begs his wife before the grave markers at The Normandy American Cemetery (often misidentified as Arlington National), a temporally juxtaposed response to a superior's deathbed order that he "earn" his dismissal from war.) We flinch at the closing image of the American flag (more so than the one that opens the film) for the reason that it shrouds Saving Private Ryan in semi-incongruous nationalism.

Though the flag itself is translucent and sun-bleached, not the pristine, Technicolor rabble-rouser you'll find in films like Patton, Spielberg frankly does not inspire confidence when it comes to symbolism. It's not his fault so much as the fault of his enduring popularity, placing him forever in jeopardy of putting forth propaganda--a responsibility some would say is too great for an avowed anti-intellectual to wield. In a persuasive 1982 essay, Pulitzer honoree George F. Will laments the precarious anti-science message of E.T., and while the saving grace of Saving Private Ryan is that it's anti-war propaganda if it's any kind at all, the re-appearance of Old Glory at the fade-out unnecessarily biases the film's tableaux of heroism. Other American or Americana icons intrude with less of a half-life: the impossibly Arcadian Ryan family farm--complete with a hoop-skirted woman silhouetted in a doorway--is a forgivable tribute to John Ford; meanwhile, General George C. Marshall's recitation of a letter signed by Abraham Lincoln (previously invoked in Spielberg's Amistad) is troublesome because Marshall is a real-life figure known, as far as this movie's backstory is concerned, for ordering that Mrs. Sullivan's only surviving son be "snatched" from the front lines and sent home. Since the Sullivans become the fictitious Ryans here but Marshall (Harve Presnell) remains Marshall, Marshall is thus vulnerable to the misapprehension that he went around decommissioning soldiers willy-nilly to curry favour with the Daughters of the American Revolution.

Were we to further indulge in armchair psychoanalysis, we might relegate the nihilism of Saving Private Ryan's violence to a matter of overcompensation. Audiences had never experienced anything quite like the confrontational D-Day re-enactment that begins four minutes into Saving Private Ryan; that they have many times in the film's wake (Pearl Harbor, Black Hawk Down, Windtalkers, We Were Soldiers, and the Spielberg-produced miniseries "Band of Brothers" each crib from Saving Private Ryan's intermittently harsh aesthetic to varying degrees) demonstrates a paucity of innovators--a Pied Piper mentality--in the American cinema and does unfortunately point to novelty as a chief source of the first act's power. On the other hand, this could finally force an appreciation of the picture's remainder, which features the strongest character interactions of any Spielberg work post-Jaws--and not just between the core ensemble, either: a little French girl slapping the hell out of her father after he tries to pawn her off on American troops and a Wehrmacht sniper attempting to talk Capt. Miller (Hanks) and his men out of cold-blooded revenge with a litany of Eisenhower-era colloquialisms (climaxing in a mangled rendition of "The Star-Spangled Banner" ("I say can you see! I say can you see!")) are at least as dramatically credible (and rueful) as the flying limbs and spilled intestines.

THE DVD
DreamWorks reissues Saving Private Ryan in a 2-disc "D-Day 60th Anniversary Commemorative Edition." Originally announced as a dual DTS/Dolby Digital title, this release disappoints in that it contains Dolby Digital audio exclusively. This means that those of us in love with the film's DTS track (an incomparable listening experience--the DD alternative is merely a stunner) are stuck with two editions of the DVD if we want supplementary material as well. The stuff of legend, Gary Rydstrom's intricate 5.1 mix, in Dolby Digital, nevertheless showcases a perfect marriage of the discrete channels. Sidewall imaging and LFE usage are both destined to impress, though as voices have a tendency to go quiet in the dialogue scenes, I'd advise keeping the volume a little higher than usual: your ears won't bleed, and in so doing you'll heed the request that accompanied theatrical prints for the film to be played loud. Presented in a 1.78:1 anamorphic widescreen transfer (1.85:1 according to the jacket art, a harmless misnomer), Saving Private Ryan looks the same as if not better than it always has on this new DVD, with advancements in authoring increasing the amount of visible shadow detail. The dense, mnemonic coat of grain is a bit-hog and likely motivated the eschewal of a DTS option.

Every single bonus feature resides on the second platter. Although Spielberg hand-puppet Laurent Bouzereau undermines the 1998 documentary efforts of Chris Hearty and Kellie Allred by taking sole directorial credit for the DVD's making-of, he's done a reasonable job of consolidating their B-roll and talking heads captured on set with newly-generated material of his own. Recapping the eight segments (bereft of a "play all" option): "An Introduction to the Film" (3 mins.) features precious glimpses of Spielberg's 8mm productions Escape to Nowhere and Fighter Squadron; "Looking into the Past" (5 mins.) provides background information on the reconnaissance mission that inspired Robert Rodat's screenplay; "Miller and His Platoon" (8 mins.) sees Spielberg latching onto the "East Coast" aspects of his actors and Edward Burns revealing his director's unsung predilection for improvisation; "Boot Camp" (8 mins.) interviews Capt. Dale Dye, a Hollywood stalwart who gave the cast a miserable basic-training experience to hang onto during the shoot; "Making Saving Private Ryan" (22 mins.) recounts the trials and tribulations of production designer Tom Sanders, divulges the rather incredulous detail that Spielberg didn't visit the Ireland location doubling for Omaha Beach prior to filming there, and finds costume designer Joanna Johnston openly suspecting her wardrobe suppliers of sexism; and "Re-creating Omaha Beach" (12 mins.) covers the spectrum of challenges--from recruiting extras to safety precautions--involved in recreating D-Day but omits any illustration of ILM's CGI contributions (cursorily noted by producer Ian Bryce) to the sequence. The best featurette, "Music and Sound" (16 mins.), includes contemporary interviews with composer John Williams and the very gifted Rydstrom (the latter of whom spills many a trade secret), while "Parting Thoughts" (4 mins.) concludes the supplementary material on a bizarrely subversive note, what with Spielberg dismissing Saving Private Ryan as practically unworthy of mention in the same sentence as the inferior Schindler's List.

Packaged in a sturdy mock catridge container needlessly swathed in a cardboard slipcover, the DVD is also available with DTS audio (with Dolby Surround sound supplanting the DD stream) in a three-pack with the non-fiction specials Price For Peace and Shooting War. Originally published: May 24, 2004.

To each his own, Bill, but I can never call SCHINDLER inferior to RYAN; I find the former better focused and more compelling. I also think that comparing RYAN to SCHINDLER is, in a way, like comparing THE SEARCH FOR SPOCK to THE WRATH OF KHAN, in that "the needs of the many outweigh the needs of the few" moral appears to have come full circle.