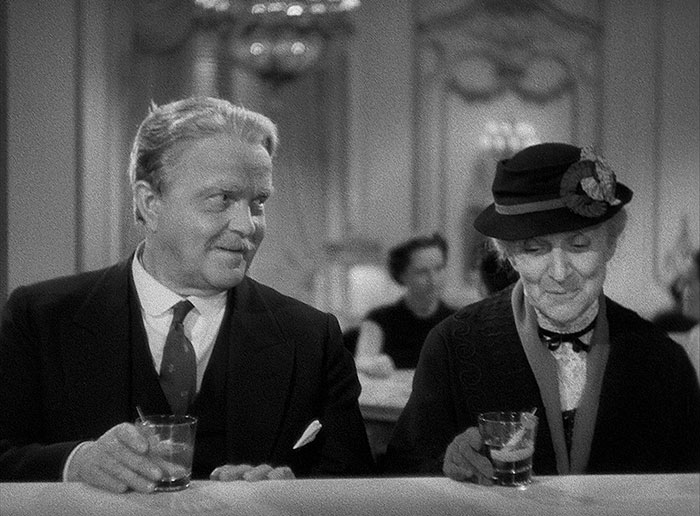 ****/**** Image B+ Sound A- Extras A
starring Victor Moore, Beulah Bondi, Fay Bainter, Thomas Mitchell
screenplay by Viña Delmar, based on the novel The Years Are So Long by Josephine Lawrence
directed by Leo McCarey

by Walter Chaw Orson Welles famously proclaimed that Leo McCarey's Make Way for Tomorrow could "make a stone cry," and it could, not because of any sentimentality, but because it pinions essential human failure mercilessly. Its tragedy is born not of high melodrama, but of low archetype. It's any story of a close, loving relationship, a mentor/apprentice relationship, that ends in less shocking than mundane betrayal that is largely preordained and even necessary. What so wounds about Make Way for Tomorrow is that the audience identifies with not only the parents who have outlived their usefulness to society and their families, but also the children who are too busy with their own lives to include them. It puts us in the role of both betrayer and betrayed. The agony it elicits is complex and multifoliate. It compounds on itself. At the end, it's even a movie about the idea that every love story is a tragedy because if everything goes exactly right, one lover will still die before the other. The film is a passion play in which the audience is Judas as well as Jesus. Make Way for Tomorrow's impact is startling some eighty years after its release, and will remain startling another eighty years from now.

Bark (Victor Moore) and Lucy (Beulah Bondi) are like your grandparents. They love each other simply; they love their five children and welcome them to their cozy little childhood home one holiday to tell them that because they've fallen on hard times, their house will be foreclosed. The children promise them safe haven, but Bark and Lucy need to separate--and then they prove themselves nuisances, intrusions on the lives of their children. Make Way for Tomorrow breaks down Bark and Lucy as decrepit and silly. Lucy speaks too loudly when she talks on the phone; Bark's eyesight is failing and he won't stop yakking about that job he's going to get that will allow him to be reunited with his wife. It's not long before we see the couple as their children do: They're burdens. They know it. ("I didn't mind until I thought Pop knew it, too.") The process of their obsolescence is merciless. There isn't a person among us who hasn't thought the same of aging parents or grandparents and berated themselves for it immediately afterwards--or lived with that lack of charity after their deaths.

Much is made of how the rest of this world treats Bark and Lucy: the car salesman who doesn't correct a misunderstanding; the attentive waitstaff at the hotel where Bark and Lucy had a gay old time once when things were possible. The impossible elegance of Make Way for Tomorrow is that this isn't meant to be didactic so much as it's meant to encourage a consideration of what's motivating the non-children of the piece to treat the elderly couple with such consideration and deference. It isn't patronizing, either. It's complicated. An idea, maybe, that it's easier to dote on the elderly who are not our responsibility, and attractive to do so to assuage some personal failing in our own lives, towards our own elders. The implication is that the children aren't the monsters they identify themselves as at the end, but rather messes of intention and loyalties not necessarily misplaced so much as necessarily repositioned. Real monsters wouldn't prioritize their responsibilities to their children or their marriages. The hell of Make Way for Tomorrow is that when Bark and Lucy later wonder if it was defective parenting that led to their children's abandonment of them, the hard answer is that their dedication and prioritization of one another and their relationship provided an ironically sturdy example.

When Bark falls ill, it's a good opportunity for daughter Cora (Elizabeth Risdon) to suggest he move to California with a fifth, never-seen sibling. When Lucy interrupts one Bridge class too many while cramping the style of her bobby-soxer granddaughter, Rhoda (Barbara Reed), Lucy's son George (Thomas Mitchell) and his wife Anita (Fay Bainter) conspire to place her in a home. Lucy, secretly aware of their plans, mercifully pre-empts the bad news by making it her idea. Rhoda urges her to "face facts." Lucy tells her, in the film's pivotal moment, that facing facts is something exciting at 17 and debilitating at 70, so why not let her avoid the facts a while longer? Bark and Lucy spend a final day together, interrupted briefly by Bark trying, desperately, to score a job in retail, which wants nothing to do with him. The world has moved on without them, as it does. As it will. Lucy walks Bark to his train and they promise to meet again; yet they say their goodbyes with declarations of love that indicate that although they're pretending pretty well, they know this is the last they'll see of each other.

Time was I looked at this film as a harsh excoriation of children who identify themselves as "probably the most good-for-nothing bunch of kids that were ever raised," and it made Make Way for Tomorrow a bitter but swallowable pill. Although it was a tragedy, it was a specific one--these assholes! Once I began to look at the picture as a more general observation that there is a season for everyone, and that this season passes inexorably, remorselessly, to make way for the next, the pill becomes unencompassable. The weight of that is existentially unbearable. Bark and Lucy are indicted in the "were ever raised" part of the children's self-mortification--but turned a different way, what would the story be had the children sacrificed their well-being, their marriages and professions, for the sake of their aging parents? Ozu looks at this dilemma again with Tokyo Story and the conclusions he draws are similar, what with the exchanges of timepieces and train schedules: From the moment of birth, parents are in the process of losing their children and their children their yearning for them. I think this forms the basis of all our mythologies of loss, martyrdom, the baseness of our natures, and the desire for transcendence. Make Way for Tomorrow is the best adaptation of Kierkegaard there ever was or ever could be. It understands why we're not better people and forgives us for it. That acceptance of our essential, mortal imperfection is terrible and humbling. 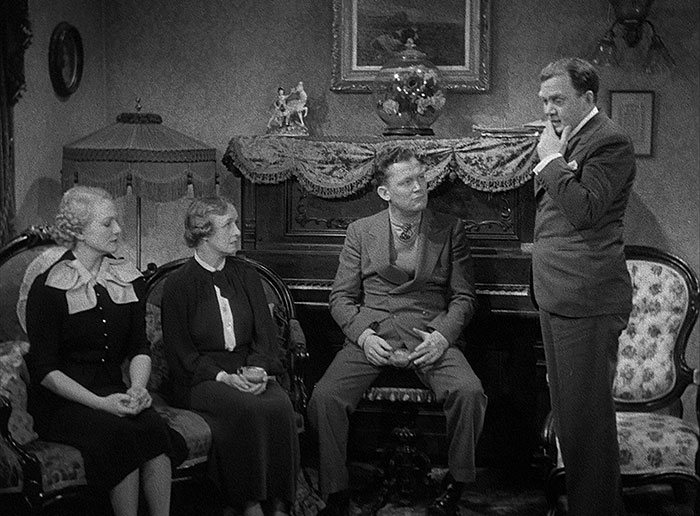 THE BLU-RAY DISC
The Criterion Collection brings Make Way for Tomorrow to Blu-ray in a fine 1080p transfer that measures just a little wider than the reported 1.33:1 aspect ratio. As presented, the picture has aged gracefully, but aged all the same. Though innumerable flaws in the elements (a 35mm master positive, one step removed from the negative)--scratches, blips, edge-warping--escaped the digital restorers' best efforts, the image is gratifyingly sharp and contrasty, with a greater depth of detail and a better-defined grain structure than the company's DVD could accomplish. In any case, this is more a film of performance and dialogue than of visual bravado; I have no complaints. Same goes for the LPCM centre-channel audio, sourced from the optical soundtrack but tastefully denoised and often impressively crisp.

Launching the supplementals, "Tomorrow, Yesterday, and Today" (20 mins., HD) finds Peter Bogdanovich breaking out his Orson Welles impersonation--the one that never seems too far away for old Boggy--in recalling the master's above-quoted opinion of Make Way for Tomorrow. Bogdanovich delivers a fine, surface-level appreciation of the film, proving, as usual, a respectful and knowledgeable custodian. The piece is at its best when he speaks of McCarey directly--indeed, it's his interview with the filmmaker in Who The Devil Made It that I turn to most often to refresh myself before speaking of McCarey. Critic and writer Gary Giddens (21 mins., HD) does an even deeper dive into McCarey the man and, perhaps inadvertently in the process, draws a clear line from where Conservatism used to be to where it is now. Invaluable.

Likewise, the standard Criterion booklet features a detailed formal discussion from Tag Gallagher and an interesting appreciation from Bertrand Tavernier. I met Tavernier a few years ago. He kissed my wife's hand and complimented her beauty. I love him, and his worldliness and formality carry into the text. Gallagher offers insight into how the theatre and its tradition of reaction is what gives McCarey's movies their power, including an unforgettable anecdote about John Ford and D-Day. Tavernier's recollections are more personal and, in that French way, ineffably bitchy. "We implored...but our pleas fell on deaf ears," he says at one point, and the passion of it lies in the phrasing. Lastly, an excerpt from Robin Wood's Sexual Politics and Narrative Film, which I've read a couple of times (looking to start a fight but always coming away with an appreciation of his righteousness), is essentially a shot-by-shot breakdown of the picture's extraordinary third act. He takes the time to comment on a bit of fourth-wall breaking in the hotel restaurant that, incidentally, cemented for me my read on the film a few viewings ago in an academic setting. Make Way for Tomorrow is about you and me, you see. We on the outside, soon to be on the inside. It's almost Lacanian in its recognition. Anyway, the curation of this release is impeccable. 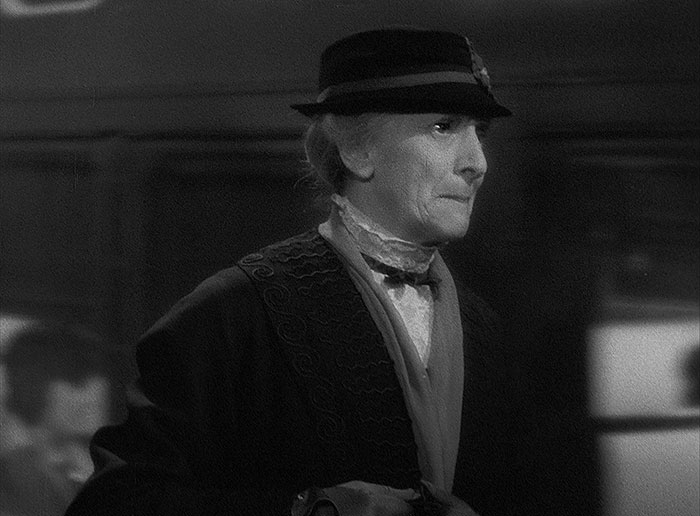