***/****
DVD - Image B+ Sound A Extras A
BD - Image A+ Sound A Extras B-
starring Liam Neeson, Ben Kingsley, Ralph Fiennes, Caroline Goodall
screenplay by Steven Zaillian, based on the novel by Thomas Keneally
directed by Steven Spielberg 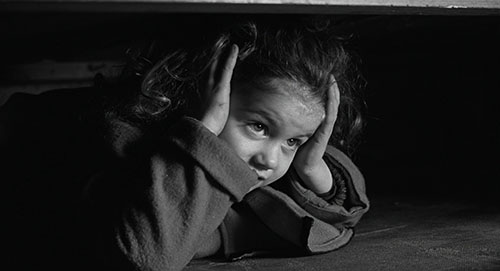 by Bill Chambers It's not the "I could've done more" speech that rankles, but rather the scene directly preceding it, in which Herr Direktor Oskar Schindler (Liam Neeson) shames a gaggle of SS guards into leaving the 1100 Jews they've been ordered to kill unharmed in a manner not far removed from one of paterfamilias Mike's guilt-trips on "The Brady Bunch". ("You don't really want to shoot these nice people, do you?" he asks (I'm hardly paraphrasing)--and one-by-one they skulk off.) I realized during my first viewing of Steven Spielberg's Schindler's List in almost a decade that I'm too much the representationalist to treat any text as sacred just because its subject matter is. Ergo, I allowed myself to cringe whenever I perceived Spielberg to be leaning on the crutch of suburban ethics, which he does often in the film's "for he's a jolly good fellow" denouement.*

Though 1993's Schindler's List marks a redemption of sorts for Spielberg--certainly from an awards standpoint--following the prosaic Indiana Jones and the Last Crusade (1989), the slight Always (1989), the ugly Hook (1991), and the malnourished Jurassic Park (1993), it marked the end of that fumes-fuelled era, not the beginning of the next one (he wouldn't step into the director's chair again for nearly a half-decade): If it goes without saying that Schindler's List has resonance those four pictures lack, there remain traces of creative fatigue in evidence. Spielberg avoided the storyboarding process on Schindler's List to inhibit his wily visual imagination, an act of artistic, nay, Jewish humility (also the reason he waived his directing fee, terming it "blood money"), but this makes his occasional capitulations to pop temptation resemble lapses in willpower, and it gives the picture a perverse inflating/deflating balloon rhythm that can suggest laziness above apprehension or compromise.

Spielberg first entertained the idea of doing Schindler's List upon the 1982 publication of Thomas Keneally's Booker Prize-winning source novel (which, controversially, won for Fiction), but some soul-searching led him to conclude that he lacked the maturity to shoulder the project's significance. One candidate to grab the reins, Sidney Lumet, reportedly felt he'd already contributed his voice to the chorus with the searing The Pawnbroker, while Billy Wilder got as far as turning in a draft of the script before announcing his retirement from the industry altogether. By the time Spielberg felt up to the challenge (why he suddenly did is something of an intellectual cul-de-sac), the rights had fallen into the hands of Martin Scorsese; a successful swap of Cape Fear for Schindler's List was carried out. Sweetening the deal was Spielberg's attachment to Cape Fear as producer, blessing Scorsese with the biggest budget of his career.

Spielberg's boldest decision at the film's helm was to shoot it in black-and-white (as he had intended on The Color Purple), ostensibly because newsreel footage had become so inextricably linked with his vision of WWII that he could only "see" it sans colour. (Prideful duplicity--just admit you're hedging your Oscar® bets, already--is unfortunately one of Spielberg's dominant traits: His previous WWII epics, 1941 and Empire of the Sun, were both in colour.) But the picture's greyscale images are more noir than Movietone. I'm uncomfortable with an expressionistic silhouette created by a spray of Nazi gunfire at the top of a stairwell, for instance, because it feels glibly Hitchcockian. Spielberg is such a filmmaking savant that it's hard to tell where the cinema ends and the protection of his sanity begins in Schindler's List, though to be fair, he doesn't always duck behind these Hays Code-isms.

Black-and-white also, somewhat ironically, enables Schindler's List's most cloying trope, a splash of red that greets the introduction of a little girl Schindler spots running for cover amidst the liquidation of the Warsaw ghetto: However audacious this sequence, it's hard not to look on it as another Spielberg kid exploited for pathos in the Chaplin vein. (Roger Ebert ludicrously declared that "[Spielberg depicts the evils of the Holocaust] without the tricks of his trade, the directorial and dramatic contrivances that would inspire the usual melodramatic payoffs"--did Ebert repress the nauseating clincher to the 'red' girl of Schindler chancing upon her corpse later on in the film?) These and other "tricks"--e.g., a belaboured parallel cutting technique that insists on contrasting Schindler's benignity with the psychopathic demonstrations of SS Haupsturmführer Amon Goeth (Ralph Fiennes, hitting his movie career running)--are somewhat maddening shortcuts to effect.

Nevertheless, there are criticisms commonly levelled at Spielberg, Neeson, and screenwriter Steven Zaillian I disagree with, such as the accusation that the trio blunted its collective depiction of Schindler for the masses. A Nazi party member with a reputation for generosity, Schindler "bought" camp-bound Jews to work at his munitions factory, where they would have safe harbour and manufacture defective weapons, all the better to subvert the war effort. This is Schindler's legacy, yet people want to hear that he was a chauvanistic, unscrupulous prick. They want him flattered less than he is in the moment where a homely woman--on the heels of being turned away by a receptionist seemingly hired for his superficial eye--penetrates Schindler's inner sanctum by dolling up her appearance; less than he is when he chews out his accountant, Itzhak Stern (Ben Kingsley), for introducing him to a one-armed machinist; even less than he is as he puts his wife on the next train in response to her ultimatum that he stop straying.

My gut tells me that Schindler's characterization is on the receiving end of politically-deferred umbrage for the film's perfectly rational sanctification of its Jewish characters--and what application would morally complex victims have in the context of Schindler risking life and limb for them except to undermine the drama? "The Jews," wrote devout Spielbergite Armond White in a fascinating FILM COMMENT piece that mostly derides the film (and that for a brief period earned White a scarlet "A" for anti-Semitic),"are ennobled when called upon, in the end, to display nobility as opposed to piously asserting it." Jawohl.

THE DVD
Universal releases Schindler's List on DVD in three separate editions. We received the handsome gift set for review, whose contents include the widescreen disc of the film, Keneally's movie tie-in paperback reissue (scrubbed of its original title, Schindler's Arc), the soundtrack CD, a senitype, and a slim volume of David James's gorgeous production stills called Schindler's List: Images of the Steven Spielberg Film. The most critical ingredient is the DVD itself, of course, a dual-sided, dual-layered platter containing the film and fewer extras than one might've hoped for. I found the 1.85:1 anamorphic widescreen transfer to be the weakest of any Spielberg title since 1941, a fact due solely to too many dips in quality--various inserts have a smeared, ghosted appearance, and edge-enhancement abounds. Meanwhile, though I interpreted the extremely hot whites as part and parcel of cinematographer Janusz Kaminski's documentary aesthetic ("Kaminski's b&w, a superlatively achieved combination of documentary style, natural light, and dramatic stylization, actually serves a banal, reverential function," argues White), I doubt the same can be said for the thin, intrusive scratches that occasionally run down the length of the image (see the 13:29 mark of side 2 for a glaring illustration). Overall, a surprisingly inconsistent video presentation.

Audio fares better: The indistinguishable DTS and Dolby Digital 5.1 mixes exhibit attention to ambient sound, although the LFE channel is relatively ignored. There is no film-related bonus material with the exception of biographies/filmographies for cast and crew, while the remaining supplements are pitched at educators (Laurent Bouzereau's tearjerking 77-minute compilation of testimonials from surviving Schindlerjuden "Voices from the List", plus a lengthy text-based biography of Oskar Schindler) and philanthropists (the 9-minute "The Shoah Foundation Story with Steven Spielberg"). To that end, a foldout form inside the packaging solicits a donation to the Shoah Foundation. Originally published: March 9, 2004. 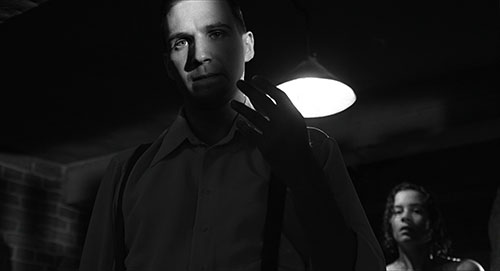 THE BLU-RAY DISC
Universal's 20th Anniversary Limited Edition Blu-ray release of Schindler's List does Janusz Kaminski's cinematography, at least, very proud. The 1.85:1, 1080p transfer continues a legacy of exquisite HD upgrades to Spielberg titles with a clean but filmlike image so tactile as to put the 2004 DVD (bundled with the Blu-ray along with an Ultraviolet copy, because Schindler's List was intended to be watched on an iPhone) to shame. Much of the movie's subtext is communicated sartorially, and here every coat is detailed to the stitch. Dynamic range richly improves upon that of not only the standard-def alternative, but also theatrical prints, which were processed on colour stock to accommodate the colour bookends and "girl in red" (a less washed-out red on Blu-ray), although it is the tendency of whites at the flashbulb end of the spectrum to run exceptionally hot, expunging whatever nominal shading was visible in those areas of the image before. Blood sprays out in jets I didn't recall being so horrific, and the sight of Ralph Fiennes taking a leak has a similarly nauseating clarity. Through it all is a sharp, satisfying scrim of grain that spikes in intensity during optical titles, of which there are several--a blunt reminder that Schindler's List, despite maintaining its youthful glow, hails from an era when film was still essentially an analog medium. Though accomplished digitally, the painstaking restoration effort--necessary already for motion pictures of this vintage--shows. The attendant 5.1 DTS-HD MA track proves the film had modest sound design to begin with, but the mix enjoys greater transparency and warmth in lossless audio, with the guitar rendition of John Williams's score almost cradling the viewer.

And that's all she wrote. No trailers, no hype; the continued lack of anything resembling making-of material feels disingenuous, even self-aggrandizing: This isn't the Holocaust itself, it's a movie, one not without its Argo-ish dramatic embellishments. (Schindler was never arrested for kissing a Jewish girl.) Voices from the List, the text bio, and the "USC Shoah Foundation" featurette return via recycled DVD. While the slipcase packaging is attractive and sturdy, you don't get the frills this time--the book, the photo spread. Modesty can become its own kind of irreverence. 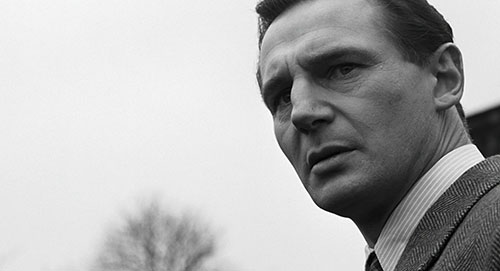 *Except Spielberg's not leaning on the code of suburban conduct in this example: the "I should've done more" speech never happened on record; the "You don't really want to shoot these nice people, do you?" guilt-trip did. Occasioned by the arrival of the gift set was a long-overdue reading of Keneally's best-seller. I picked it up after watching the film and learned a lot--about history and about the meretriciousness of the auteurist perspective. It's only because Spielberg left in the abovementioned occurrence while omitting amoral details (like the Jewish workers sabotaging Schindler's car to prevent him from leaving at war's end) that I stand by the observation. return

I personally think the Schindler-Goeth dynamic is one of the finest "opposite sides" contrasts Spielberg has devised, right up there with Brody & Quint, Indy & Belloq and Frank & Carl. It's one of the reasons the film still works as well as it does, for me; Liam Neeson and Ralph Fiennes have rarely been better.