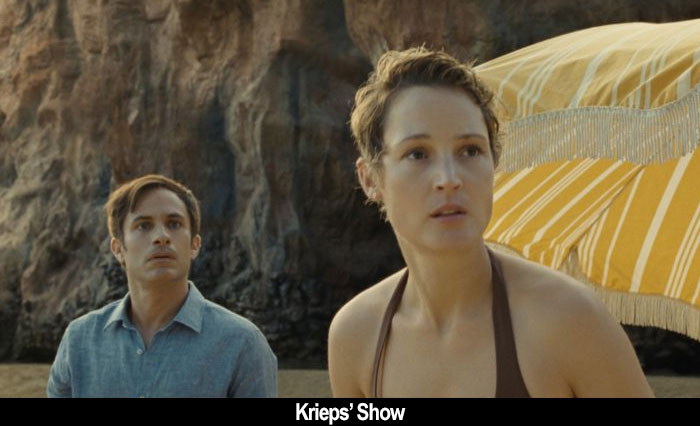 by Walter Chaw M. Night Shyamalan is a brilliant filmmaker and an arrogant storyteller, and sometimes that works out pretty well (see: The Sixth Sense, Unbreakable). More often, it yields wildly mixed results where his savant-like mastery of the visual wars with the pedantic, childish, even messianic tendencies of his writing. Imagine if Spielberg wrote all his own movies instead of merely tacking his tidy happy endings on them. There's possibly a paper in how the degree of obstreperousness in Shyamalan's cameos has a direct correlation to the film's obnoxiousness. My favourite Hitchcock cameo is in Notorious, where Hitch has himself drinking a glass of champagne at a party at a Nazi's house, thus, through a series of events, accelerating the discovery of our heroic secret agent. But Hitch never cast himself, as Shyamalan has, in extended speaking roles that have found him playing a prophet writing a new Bible (Lady in the Water), delivering key exposition in a protracted flashback (Signs), and serving as the beneficiary of the most complicated camera set-up to deliver the twist in an otherwise transfixing, transporting picture (The Village). Tarantino used to do garbage like that, and, predictably, this was reliably the worst part of a Tarantino movie. For a while, after Shyamalan went through a pronounced humbling (The Happening, The Last Airbender, After Earth), he cut the shit for a trio of tight, nasty, mostly-glorious, largely career-resuscitating little thrillers (The Visit, Split, Glass). With his latest, Old, he's got his confidence back, and that's...bad.

Guy (Gael Garcia Bernal) and Prisca (Vicky Krieps) are an unhappily-married couple and parents to two little ones, Maddox (Alexa Swinton) and Trent (Nolan River). In a last-ditch attempt to save their marriage--or create one last happy memory for the kids that will forever be tainted by the knowledge that their parents split up immediately after--they visit a luxurious, curiously cheap vacation spot where the mysterious Resort Manager (Gustaf Hammarston) tells them about a secret beach for his "special" guests. Where? Not to worry, Driver (Shyamalan) will take them there. So off they go after a brief buildup where the dialogue is peppered with stuff about time and living in the moment and how moms and dads can't wait to see how their kids turn out--stuff that is exactly how you would parody a film with Old's premise if you were SCTV or MAD Magazine and this was the late-'70s. Once there, they find they are not so very special after all, as they're joined by thoracic surgeon Charles (Rufus Sewell), his trophy wife Chrystal (Abbey Lee), his young daughter Kara (Mikaya Fisher), and his elderly mother Agnes (Kathleen Chalfant). Not to mention...look, between this and listing off the actors who play the kids at different ages, we'll be here all day. Essentially, it's a diverse melting-pot of stock characters played by various races, including a rapper called Mid-Sized Sedan (Aaron Pierre) and a Chinese guy who is a nurse and was also on the swim team. The Driver supplies them with a lot of freeze-packed food and then the families fuck around for a little while before they happen on a dead naked lady, immediately accuse the rapper of killing her, and discover they can't leave the beach without blacking out and coming to back on the beach. Welcome to the Hotel Metaphor-nia.

Nevertheless, the question remains: what is Old about? What is the beach a metaphor for beyond growing older, or is that all? And if that's all, shouldn't it be enough? I very much like the idea of a film willing to explore the peculiarities of aging, and more than one wonk has offered up, along with the requisite aging puns, David Cronenberg as the master of this kind of body-horror-through-love-and-devotion material. As a movie made during a pandemic, it deals with the compacted/confusing passage of time in a way more novel than the recent spate of time-looping pieces seem to manage, with the possible exception of Palm Springs. But aging in Old is the device to solve the greater puzzle of who it is with a camera on the mountain ridge over there, overlooking the beach, watching their struggles and documenting their decline. No points for guessing, especially if you're familiar with Shyamalan's self-driven narrative of himself as the next Hitchcock and manage to be entirely unsurprised by a shot late in the film cribbed explicitly from Rear Window. Old doesn't have a thought in its head and that's a problem, because if it's not philosophical, it becomes a technical exercise, exactly like Signs (which was, likewise, just so gorgeously photographed and then so completely betrayed by a script that's more interested in tricking you than in edifying you in any way). Shyamalan is additionally often compared to Rod Serling by people largely unfamiliar with Serling's work. (Isn't it fascinating how Shyamalan is regularly called the two things people know just well enough to misuse? "Hitchcockian" and "Twilight Zone"-like?) Serling's scripts are marvels of speculative and moral fiction. Shyamalan gets half of that right. At this point, I don't think he has an ethos driving him beyond the desire to impress. He's the cocktail-party close-magic guy--David Blaine working in celluloid instead of fruit and playing cards.

Once Old reveals itself to be a puzzle, it invites investigation into the gears of said puzzle. Why do aliens for whom water is like battery acid come to a planet that is mostly water to harvest things that are also mostly water? What happens when it rains? Notoriously, it was leaked that questions of this sort were typed out and distributed to the crew of Signs with a warning that they were not to be posed to the Artist. The list for Old probably included questions such as, if these people are aging a year every half-hour, why are their nails and beards exempt from growth? It's fair to say that getting tangled up in these weeds is beside the point. Most of Hitchcock's plots would deflate like a balloon if you took a second to test them. (Is a crop duster the best way to kill someone waiting patiently at a rural bus stop?) The difference is that Hitchcock's films are never about the MacGuffin, while Shyamalan's films are the MacGuffin. It's a terrible shame that Shyamalan came to conflate the two, since he could have been that once-in-a-generation filmmaker. What makes The Sixth Sense superlative is its exploration of grief, of the mentor relationship, of a marriage disintegrating, of a mother's fear for her child, of how we carry our trauma around with us like the ghosts of our former selves. The twist is the cherry on top, not the sundae. Old is really only capable of being about the 1950s-era pulp resolution, so desperate and undignified that watching it feels like watching a gifted singer on the biggest stage forget the lyrics.