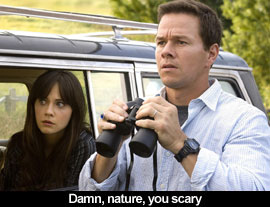 by Walter Chaw The number one, indisputable, biggest surprise of M. Night Shyamalan's The Happening is that it doesn't entirely suck--followed fast by the stunner that the director-writer-producer-demiurge doesn't appear anywhere in the film as Christ on a chariot. After his self-aggrandizing cameos in Signs (as catalyst to the story's existence and outcome), The Village (as star of the "twist" in the film's most complicated lighting/camera set-up), and Lady in the Water (as author of the Bible), it seemed that was the next logical step. Instead, The Happening is a Larry Cohen-esque thriller along the lines of God Told Me To, delivered with a heavy hand, to be sure, but full of some of the most delicious misanthropy to hit screens since Julia Roberts was making romantic comedies. Shyamalan, if we follow the auteur theory as closely as he claims to, hates his fellow man enough so that a coda revealing a blessed pregnancy is framed in such a way as to suggest that mankind is spelling its own doom with this urge to procreate. By extension, it's tempting to see it as a criticism of pictures that end in Spielberg town, with marriages and babies and a cabin in the woods for the precogs. If Shyamalan is to the point where he's actively flipping the bird to audiences and expectations, eschewing his life-support systems for twists and protracted takes in favour of ugly, flat, uninspired action sequences and blighted implications, then I might actually at this point be looking forward to his next one. Meaning, at the end of the day, that's the biggest surprise of The Happening.

Its dreadful title sounding like an advertisement for a sale at TJ Maxx, The Happening refers to one bucolic day in late spring when people start babbling idiotically and offing themselves en masse like lemmings. Affecting only the eastern seaboard--the source, we imagine, for Philadelphian Shyamalan's greatest childhood torments (next stop, Disneyland?)--the phenomenon impels a panicked migration westward, the film's heroic trio consisting of dorky science teacher Elliot (Mark Wahlberg), his flighty wife Alma (Zooey Deschanel), and their best friend's daughter Reaction Shot (Ashlyn Sanchez). John Leguizamo has a brief, irritating, disturbingly-terminated cameo--the first hint that Shyamalan means business after having most of Central Park commit suicide along with a construction crew in another disquieting reference to the parts of 9/11 that have been edited from the visual record. It's more than a vision of the apocalypse, though--it's a vision of self-abnegation based on an essential dislike of the human race. Giving too much away to make the connection its trailer makes between this genocide and the inexplicable disappearance of millions of honeybees, sufficed to say that The Happening is an eco-terror horror film (more Prophecy John Frankenheimer than John Wyndham) long on the ridiculous and short on the sense. If it sounds like his last handful of disasters (ultimately, the only Shyamalan that still plays is Unbreakable), the key difference is that this time around, it's all delivered with a fascinating frustration and rancour. The Happening, see, really hates your guts.

Consider the message, muttered at one point, that people are horrible shits and for the most part not worth saving. The "good ones" in the film (other than our nuclear centre) are mad Gomers while the rest are just various shades of begging to be killed. Two kids (one of them a nigh-unrecognizable Spencer Breslin--I thought Meat Loaf was in the picture for more than half of it) seem all right until they start trying to break into a survivalist enclave; and an eccentric old bird (Betty Buckley) marooned in her backwoods booby hatch is the sort of character Bette Davis would have played for a paycheck once upon a time. The Happening advocates for a thinning of the herd. It's scabrous, hateful--a deeply stupid scene involving a lion tamer and his charges would be laughable (well, it is laughable in any case) if it weren't evidence of a deep-seated misunderstanding of what's scary and what's merely revealing of a general lack of respect for your fellow man. Without any redeeming characters, without any Inconvenient Truth message beyond the obvious, The Happening is another step in the complete irrelevance of a filmmaker a lot of people, himself included, were calling the new Hitchcock. It's pathetic (never scary, never particularly tense, never poignant), but it's interesting as hell if, for no other reason, than that it's unusual to see a picture that's this much of an asshole, making no attempt whatsoever to simulate a single human emotion. Shyamalan's essentially made a sociopathic movie. Originally published: June 13, 2008.