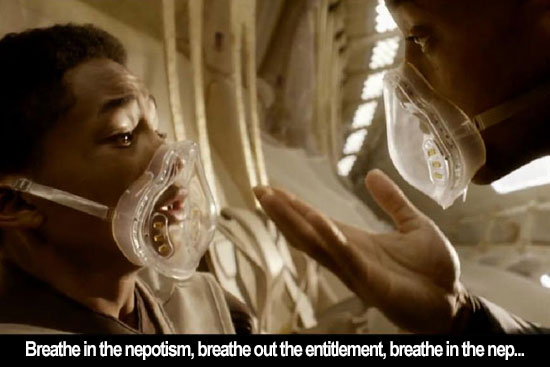 by Angelo Muredda Give M. Night Shyamalan this much: he is not a timid filmmaker. Where some might have responded to the critical drubbing of The Village with a shrug, Shyamalan turned his follow-up, ostensibly a children's story, into a vicious riposte. Lady in the Water isn't just an off-kilter fairytale about an endangered waif who falls out of the sky and into Paul Giamatti's swimming pool: it's also a deranged manifesto for protecting the imaginative freedom of artists like Shyamalan--playing a writer who will one day be martyred for his ideas, collected in a volume modestly titled "The Cookbook"--against critics and nonbelievers, who meet deservedly bad ends. That would be a gutsy move if the artist had something to die for himself, yet the best you could say for Lady in the Water is that at least Bob Balaban's beast-ravaged movie reviewer is spared the finale with a saviour eagle that Shyamalan has the gall to christen "Eaglet." Though nominally a star vehicle for Will Smith and his son Jaden, After Earth covers much the same ground, down to its repetition of both the aquila ex machina trope and half-assed nomenclature. (A double-sided spear is a "cutlass" in the future, while walking stealthily is now "ghosting." No word on what we call spoons or actual cutlasses.) Lady in the Water's world-building by crayon doodles can be explained away easily enough by its bedtime-story mechanics, but there's no excuse for After Earth, a thinly-sketched, unbearably haughty survival story that cites Moby-Dick as it steals from Suzanne Collins.

Once known for his twist endings, Shyamalan seems content now to blow the premise in the title, which foretells the family Smith's shipwrecking on a post-apocalyptic Earth stalked by super-evolved animals with a bloodlust for humans. At least that's what Smith Sr., a military commander with the unfortunate name Cypher Raige, tells cadet son Kitai (Jaden Smith) after he's sidelined in the crash. Kitai, armed with humanity's highest-grade form-fitting jumpsuit, portable hospital, and communications system--forget Google Glass: in the future we'll communicate via 16:9 touchscreen tablets embedded in our forearms--ventures out into the woebegone world to get a signal flare while Dad watches his every move through a video-tracking system so inconsistent and convolutedly arrayed as to make The Hunger Games' set-up look lucid.

Cypher's warning about the locals primes us for a kitschy missing-link showdown between Kitai and a less chatty Dr. Zaius, but that scenario is worryingly short-lived. Shyamalan doesn't appear to have gotten very far in mapping out the evolutionary leaps of our planet's present inhabitants on the script's cocktail napkins. The revelation is that monkeys now look CG and tigers can climb trees, which is nice but not arm-tablet nice. The real BigBad is the Ursa, a giant cockroach with a pincer who's closer to the Raige family (shades of Jaws: The Revenge) than any primate. As with Signs, you can bet there's a family trauma in the recent past--justifying an appearance by Kitai's big sister, played by fellow famous offspring Zoë Kravitz--and a fortuitously idiotic way of banishing it.

Shyamalan has a penchant for slow-burn suspense, and he flexes that muscle well enough in traumatic flashbacks that have the benefit of being rooted in domestic space, always his favourite place to smash pretty things. Still, it's difficult to ratchet up tension with material this unremittingly silly, and Shyamalan has no sense of how to pace anything other than jump-scares. The glorified father-son camping trip is credited to a story by the elder Smith, living out his push-pull fantasies of total surveillance and then total emancipation of Jaden through the equivalent of a two-hundred-million dollar adaptation of Patrick Stewart's script from "Extras," punchline and all: "I've seen everything." Whoever's credited, there's no story here, only marks to hit or fall short of; it's hard to sustain wonderment with science-fiction this shabbily realized. Consider a moment that typifies the film's simultaneous arrogance and incompetence at establishing its ground rules, as Cypher passes on the secret to bagging an Ursa to his attention-starved son. "Fear," he explains, with the full weight of his authorial surrogate behind him, "causes us to fear things that don't exist." Something for the "Cookbook," no doubt (or a Scientology pamphlet), but what could that asinine circular definition--which Smith delivers in the stultified cadence that's at least justified as a faux-historical anachronism in The Village--possibly mean?

Grandiloquent nonsense aside, Shyamalan's storytelling tropes are so pronounced that he is ripe for the kind of retrospective appreciation the so-called vulgar auteurists have brought to filmmakers like John McTiernan. Here again is an aloof father re-enchanted with his children following a life-threatening crisis. Here again, too, is a forced entry into a home, by a creature with a phallic pincer in place of Donnie Wahlberg's firearm. Auteur or no, there's no accounting for the sentimentalized misogyny that runs from at least Unbreakable to After Earth, rendering every wife either a depressive shrew or a humble sacrifice at the altar of her husband's belated self-realization. This time it's a sister who dies so that Kitai can become the man he should have been all along, but those who don't walk out before the final minutes will be greeted by one last jab at the Shyamalan-ian mother: "I want to go work with Mom." It's woman's work, sure, just not as intense. Or boring.