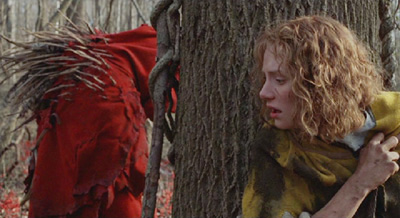 by Walter Chaw M. Night Shyamalan's films have become life support systems for his twists--empty, ponderous, self-righteous shells of ideas carried by cadaverous actors speaking in contraction-less sentences and spectral tones. He seems with Signs and now The Village to be espousing some kind of insane puritanical religion--call it the Church of Shyamalan, where the real world is too loutish a place for his gallery of close-mouthed martyrs, who exist in specially-created Hitchcockian microverses as airless as they are unlikely. It's not too much of a stretch to begin to view his mission as one where he challenges his East Indian self to make his increasingly self-aggrandizing cameos as difficult as possible. Philadelphia? No problem. Hooterville, PA--a little tougher. Turn of the century Amish-town? Byzantine, to say the least.

The Village is based on the premise that occupants in a little valley have made a pact with red-robed monsters that live in the surrounding woods. The pact has something to do with the villagers staying in the village and the monsters staying in the woods. Soon, skinned Chihuahuas start showing up around town along with red marks on a few village doors (Passover scholars prick up their ears (as do Mexican pet scholars))--it appears as though, for whatever reason, the pact is ending. Because Shyamalan's films are just about the twist now, and because he's invested lately in a bizarre religious conservatism, it's actually extremely easy to predict what the twist is going to be. Without being able to talk about it and how stupid it is, what we're left to discuss is what the film is about outside of the twist: nothing.

But there lurks the potential to explore one of three themes. Set in rural Pennsylvania in an isolationist community mired in tradition, it could be about the Amish. With its fixation on red and the appearance of a retarded kid (Noah (Adrien Brody)) whose innocence is extolled in long drones, it could be about Original Sin. Or, with its moralizing tone and the various elders' (William Hurt, Sigourney Weaver, Brendan Gleeson) stories of victimization in the outside world, it could be about the fall of man. Abandoning all hope that it's about anything of even such piddling bumper-sticker consequence, The Village could also be a simple love story between a blind girl (Ivy Walker (Bryce Dallas Howard, Ron's spawn)) and a near-mute (Lucius Hunt (Joaquin Phoenix)), but it's so wrapped up in justification for its twist that it lets the air out of its cotillion courtship in a slow hiss.

This is dreadful, reductive filmmaking. Like those drinking-bird toys that bob up and down, it's all empty gesture gussied up in a plastic top hat with no real urgent purpose. Hitchcock liked to use red, Spielberg still uses it, ergo, so does Shyamalan. In The Sixth Sense, red announced the approach of the supernatural; in The Village, it announces Shyamalan's debt to not only the master, but also to greats like Vittorio De Sica and Nicholas Roeg. I can quote Shakespeare, doesn't make me Shakespeare. The bland colour scheme (courtesy DP Roger Deakins), storyline, and costume and set design actually evoke Hayao Miyazaki's Princess Mononoke, adding another grandmaster filmmaker to Shyamalan's limited shrine. The man has talent--I loved both The Sixth Sense and Unbreakable--but he has, too, the kind of ego that finds his name in three-story letters over the titles of his films and his mug on the covers of his DVDs alongside Bruce Willis and Mel Gibson. I can insert myself into a picture of Laurence Olivier. Doesn't make me Laurence Olivier.

There's a scene buried in the middle of the picture between Noah and Lucius that is filmed in such a way that it breaks my heart that Shyamalan has let his pride get in the way of his talent. It is mellifluous and haunted--gruesome in a way that strikes a balance between explicit and subtle. And then the plot happens, and the writing happens, and the acting happens, and the poetry of those precious few moments is drummed into an O. Henry pancake that, whether or not it manages to surprise a sad few shut-ins, won't begin to satisfy even the most Pollyannaish of moviegoers. Shyamalan puts the "sham" in "Shyamalan." He's so desperate to be counted among the pantheon of legendary filmmakers that he's begun to hide behind his borrowed stylistic flourishes. Compare his last two films with Quentin Tarantino's: both are directors accused of cribbing--only one of them is still crafting the homage into a vibrant, viable identity. I don't recall Tarantino's camp mounting a fake documentary for the Sci-Fi Channel to drum up interest in a period costume drama with a weak Grimm Fairy Tale concept; I don't recall Tarantino's camp scolding the press to suppress the ending; and I certainly don't recall Tarantino essentially barring non-mainstream press from his screenings. It smells a lot like fear--turns out that Shyamalan had something to be afraid of.

The Village at the very least is ponderous and hamstrung. Shyamalan is gifted enough that his films should never be this bad, but he's staggering now under an unbearable weight. He doesn't stand on the shoulders of giants, giants are standing on him, and that strain has broken him. Shyamalan decrees that we shall not spoil his precious finale (to perhaps provide some perspective, the last major studio picture to pass along this edict in this way was Tom Shadyac's Dragonfly), and so he demands that we dwell on other things. Okay, how about imperial hubris? The wisdom of keeping certain items in certain lockboxes? The rationale behind making a two-hour episode of "Little House on the Prairie"? Why something vital is hidden under the floorboards of a freakin' prison? Or the mystery of how Chihuahuas found their way into rural Pennsylvania, circa 1897? On further reflection, I wonder if Shyamalan wouldn't ultimately prefer we focus on his ridiculous twist rather than the rest of this ridiculous movie. Originally published: July 30, 2004.

THE DVD
by Bill Chambers The Village is M. Night Shyamalan's fourth consecutive film to be released on DVD under Disney's VISTA Series banner. Like Signs before it, this is a single-disc title--one that has even less going for it in the extras department than Signs does. Such a texturally rich film as The Village certainly needs all the digital real estate it can get, but then why not devote an entire platter to it and shuck the extras off onto a second? For what it's worth, the centerpiece making-of featurette--"Deconstructing The Village" (25 mins.)--ends rather abruptly sans credits, perhaps an indication that what started out as a 2-disc set was reconfigured (i.e. pared down) in haste. If the self-applauding Laurent Bouzereau again produced the supplementary material, I can't imagine he'd consent to going unbilled.

Divided into individually indexed sections on the shoot, the casting, pioneer boot camp, editing/sound, and "Those We Don't Speak Of" (a.k.a. the wood bogeys), the doc is at its most compelling when detailing the contributions of violinist Hilary Hahn, whose lilting solos inspired Shyamalan and composer James Newton Howard to radically rethink the score two-thirds into the recording of it. (Shyamalan also brought in Stan Winston protégé Crash McCreery to redesign the creatures midway through filming (discussed) and reshot the ending (not discussed), arguable confirmation, both, of the rumour that ol' Night contractually refuses "notes"--being receptive to a little friendly advice would probably spare him a few headaches in the long run.) Video introductions from Shyamalan preface four full-frame deleted scenes--which, according to the cover art, "reveal clues to the movie's twists and turns"--totalling 11 minutes, the longest of which finds Brendan Gleeson giving his everything to a monologue that more than likely motivated him to accept the otherwise unmemorable role of August Nicholson in the first place.

"Bryce's Diary" is a weird, 5-minute music video of sorts that marries the journalistic musings of Opie fille to clips and stills from The Village. Howard's complete lack of guile makes her sound alternately disingenuous and medicated, though it does nothing to tarnish the memory of her starmaking performance in the film proper. Rounding out the platter: the traditional clip from one of Night's home movies, a laborious and unacknowledged homage to Raiders of the Lost Ark (do I detect a note of envy towards those kids who became famous for their shot-for-shot Raiders remake?); a photo gallery; and trailers for The Hitchhiker's Guide to the Galaxy, Ladder 49, Mr. 3000, and National Treasure, all which except for the last cue up automatically prior to the main menu. Earning its THX certification, The Village's 1.84:1 anamorphic widescreen transfer* invites adjectives like sumptuous and filmlike, and better yet, the studio seems to have curbed its recent habit of overfiltering the image. The DVD also sports a superior Dolby Digital 5.1 EX track whose spatial depth, true to Shyamalan's word within the bonus features, increases as the reels accumulate. Dialogue is louder and clearer than we've come to expect from the director's work. Originally published: January 10, 2005.