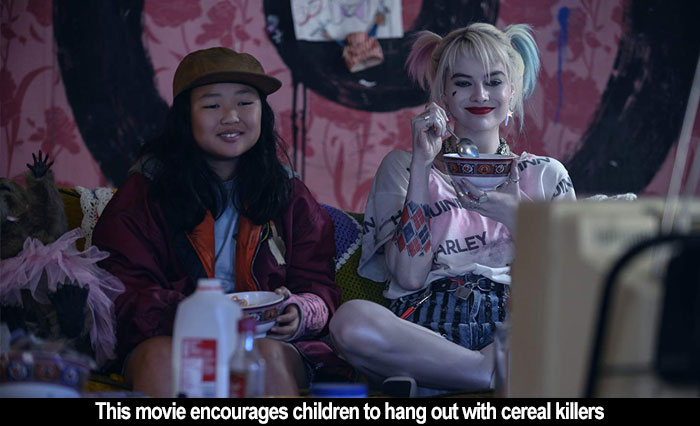 by Walter Chaw When I used to teach Hitchcock, I'd ask students what the term "bird" refers to in British colloquial slang. "Women," yes? So, immediately, Cathy Yan's Birds of Prey: And the Fantabulous Emancipation of One Harley Quinn (hereafter Birds of Prey) carries with it an obvious secondary, didactic meaning, announcing itself as a piece about women who are predatory at most, not to be fucked with at least. I'm all-in. What kind of idiot wouldn't be? The time is right for a film about women assuming agency, flipping the script on predatory men, and making a DC comic-book property into something very much like an extended rape-revenge horror movie. I love rape-revenge horror movies. Ms. 45 is seminal. Ditto the original I Spit On Your Grave. I even love Neil Jordan's widely-derided The Brave One, which hung issues of assault and miscegenation on the framework of what is essentially a superhero origin story, years before it was stylish to do so. The time is right, too, for more female-led action films--what better than one starring a popular actress playing a popular antihero? Pity, then, that Birds of Prey is more Captain Marvel than Wonder Woman.

That's a recommendation for some and, shit, I guess it's a recommendation from me as well, in the sense that if you're watching a movie because you want to see your stuff reflected back at you as loudly and defiantly as possible, without any attendant introspection, I recommend this movie to you. Birds of Prey is essentially the "Just a Girl" sequence from Captain Marvel stretched, torturously, to feature-length. The picture opens with an animated prologue in which our hero, Suicide Squad's Harley Quinn (Margot Robbie), narrates a childhood spent suffering an abusive father that translates obliquely into a string of bad relationship choices, culminating in her dalliance with The Joker. The diagnosis of her poor object choice as the product of a bad dad is Ted-level insightful and facile to boot, though I'm not sure what you were expecting. Harley and The Joker have split up at the start of Birds of Prey, and we watch Harley process her grief. So far, so good, honestly. The Harley Quinn character is fascinating because she's a product of abuse. A movie about her sadism being the end result of the misdeeds of a string of mediocre men is absolutely on point. Then the film doesn't know what to do anymore, so it just becomes vile and noisy.

The primary devices of Birds of Prey are a series of "The Office"-style, fourth-wall-breaking asides from Harley and her tart, smartass, sometimes-deranged voiceover narration. Robbie is best here when she's acting like she's in a cartoon, although she's vibrating at a frequency that only Ewan MacGregor can match as baddie Black Mask. The crux of the picture is the eventual coalescing of a team, a quartet of wronged women assembled by circumstance into an evil, distaff Justice League--a thing the film takes way too long to accomplish. I don't think Harley is surrounded by her gang until there's like ten minutes left in this thing, and it's too long a wait. Without their interplay, this is one of those books you read with multiple storylines where you skim the chapters you're not interested in to get back to the ones you are. The MacGuffin has to do with a diamond that street urchin Cassandra (Ella Jay Basco) has purloined and then swallowed for safe-keeping. Cassandra is Asian, and it bears a little unpacking why it is that Asians get cast as two-bit petty criminals in stuff like this and Ocean's Eight, but I'm tired. Black Mask wants the diamond. So does assassin Huntress (Mary Elizabeth Winstead), fulfilling the O-Ren Ishii role--backstory and all. So does Detective Renee Montoya (Rosie Perez), who's forced to work with an idiot dude because, as a woman, she was passed over for promotion. Though more could have been done to dig into this and other issues raised herein, the film is content to be a cataloging of grievances. Oh, there's also Black Canary (Jurnee Smollett-Bell), a singer in Black Mask's club; why is she involved in this again?

Maybe it's just for the scene I liked very much where Black Canary saves Harley from being raped by two guys in a van. More of that and less of all that interminable filler, e.g., stealing shopping carts with groceries only to cut to the next scene to find those groceries magically bagged. I realize that trainspotting continuity bullshit is low, but the movie's boring and you're going to need something else to do. There's plenty of meat in Birds of Prey but not a lot of awareness of what to do with that meat. I mean, Harley has a pet hyena, for fuck's sake! Do something! Consider how Black Mask's preferred method of murder is cutting people's faces off, which Birds of Prey downplays with this stupid explanation of how he likes to collect shrunken heads. He's a hobbyist? But why this hobby? The film is so much about the toxicity of the male gaze that a face-stealing villain demands a more careful consideration than that he fetishizes a primitive culture's antiquated ritual. When the Birds finally get together during a literal funhouse fight sequence, it's fun enough to make you wish the film had started there and then improved as it went along, rather than limp until it was almost over to tantalize with untapped potential.

Say this for Birds of Prey: it's a film for a specific, underserved audience that, like the recent Black Christmas update (the movie it most resembles, empty comparisons to the John Wick franchise notwithstanding), engages some essential topics, unfortunately without really having anything to say about them. All would be forgiven if it knew what parts should be vile and what parts not. If it fails, here is why it fails: imagine Captain Marvel with face-degloving and a random woman having her dress cut off her and then shaking in terror and trauma, but then Harley the psycho everyone loves is a mentor with a heart of gold. And what happens to that sexually-humiliated woman? Is she all right? Has she gotten help? Was she gang-raped? Murdered? It seems an odd choice for this film, of all films, to use an anonymous woman's suffering as character development for a man. While some continuity errors are masturbatory to report, others, such as this one, undermine the entire soul of the piece. I'm willing to accept that some movies aren't for me--that this is a wish-fulfillment fantasy for women tired of feeling scared and voiceless. I gotta say, though, that for as long as they've been waiting, women deserve better than middling, pandering stuff like Captain Marvel and now Birds Of Prey. It says everything that too many, for fear of never having any more movies that attempt to speak to them again, will form an unconditional barrier around it to deflect even cogent criticism. I wish I could say their fears aren't valid, but I can't. I wish this film were good, but it isn't.