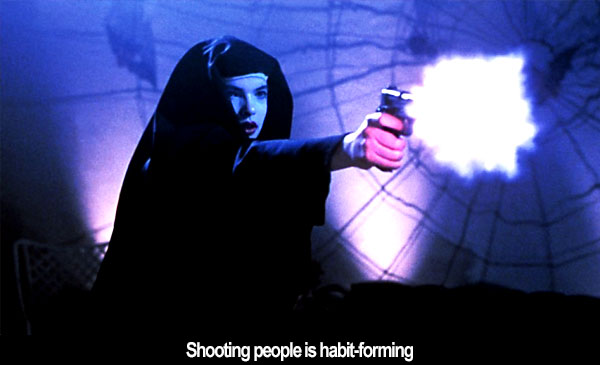 by Walter Chaw SPOILER WARNING IN EFFECT. I first saw Abel Ferrara's Ms. 45 the way I suspect most men my age saw it: furtively, in my bedroom, on VHS. It had about it that aura of skeeviness I spent a good portion of my time hunting for at the local video store. My nose for such things had been rewarded with likes of I Spit on Your Grave and The Last House on the Left, films that never failed to be prurient in their rape sequences, no matter their nods to subsequently avenging our fair, fairly defiled, maidens. What Ferrara presents with this, arguably his second-most notorious film (The Addiction is unbelievable, and still only available on VHS), is a rape-revenge tale that does nothing to de-feminize its heroine--rather correctly, powerfully, identifying that the loci of a woman's power is indeed her sexuality, even as that sexuality draws the objectifying, dehumanizing gaze. It's why, after all, so many fertility goddesses are also destroyers, isn't it? There's a moment in the third Terminator where the female terminator, played by the already-intimidating Kristanna Loken, makes a decision to enlarge her breasts prior to confronting a male victim. If only the rest of that film were so wise.

Ms. 45, on the other hand, is terrifyingly wise, beginning with the decision to have its heroine, Zoë Tamerlis's Thana ("thana," from the Greek meaning "death"), be a mute seamstress, her profession a nod perhaps to the Fate Atropos, who cuts the thread at the end of life (or any of the others who weave and measure), and her inability to speak a more modern reference perhaps to the silencing of a woman's voice. Subtle it ain't, but wise? At least. On the way home, walking through a grindhouse NYC circa 1979, she endures a gauntlet of catcalls and leering--the male chorus aroused and at play in the wild. Ferrara and screenwriter Nicholas St. John establish the rules of this kingdom in this way, male sexuality at war eternally with female sexuality, the constant threat of violence the fulcrum between. Thana descends into the subway; she transgresses into an alley; and she's raped for her transgression. She returns home to her tidy little apartment and is raped again by a different assailant. Thana lucks out--if you could call it luck by that point--when her assailant drops his .45 in the throes of the act, giving her a chance to grab a glass apple (sure, why not) and bludgeon him to death.

It's Repulsion, of course--the justified version of it, with the rape the inciting event in her incipient madness as opposed to an unfortunate maybe-misunderstanding well into it. And it's Biblical, what with that apple and all. But it's more than just a quick wink at Woman as the scourge of Man: It's an early declaration that Ms. 45 will be about Thana's rude emergence into knowledge of not only good and evil, but also her own sexuality. The rapes aren't sexualized in the slightest; Ferrara is more interested in the ugliness of the act than in exploiting Thana's humiliation. As a director known for his testosterone operas, his real sympathy for female characters gets lost in the conversation. I'm thinking in particular of a scene from his underseen, vastly underestimated The Funeral where Isabella Rossellini's character is raped and Ferrara teaches us exactly how frightening Chris Penn could be with a script and a director. Thana responds with revulsion, sure, but we're spared the requisite shower cleanse where she hallucinates hands grabbing at her breasts. She'll wear the taint of her defilement for the rest of the film, and I didn't know it then, but the whiff of sleaziness I caught off that old lurid VHS cover was a little of my own vintage.

Thana takes to carrying the titular gun everywhere. She cuts up her attacker's body and starts depositing it in various parts of the city in black trash bags, an idea she gets in a moment that Ferrara beautifully tells with a few quick edits and a rack-focus to a trash can where she works. Ms. 45, with minimal retooling, could be a powerful silent film. Again carrying a reputation as Ferrara the brute, he shows here that he was always a stylist--that the little dance Christopher Walken's kingpin does in King of New York is just a hint of Ferrara's grace.

Too predictably, Thana has a nosy landlady (one who kind of oh-my-god talks like Walken), and there's a nosy dog Ferrara loses his nerve over. And, sure, some elements are too broad even by the rules established by the picture's own Times Square fable parameters. But, man. Thana starts shooting men for being, essentially, men. We listen as guys talk about why they decided not to have that vasectomy after all, about how they would love an introduction to the foxy girl who just walked into the party. There are Arab guys, and Chinese guys, and a Superfly pimp, naturally, but most of all there are white guys. Yet Thana is indiscriminate, and so is Ferrara in identifying that men are of a breed--they say and do things that are hurtful to women, possibly without meaning to. Still, it might be fruitful to diagram each of Thana's victims and their chosen avatars: the baseball mascot, the cowboy, the gym teacher.

The brilliance of Ms. 45 is that it suggests we're doomed, that there's no real hope for understanding between the sexes--the best that can ever be arrived at is a sort of queasy armistice, ever on the verge of disintegration. Thana finds herself: she begins dressing provocatively, slathering on lipstick a shade we used to call "fuck-me red," and in the film's final set-piece at a masquerade party, she goes as a nun in full habit. When a paramour starts to go down on her in the backroom ("The mound of Venus!" he declares), he lifts her skirt to discover every man's hetero nightmare of a giant penis: that .45, strapped to her thigh. In her subsequent rampage, I was reminded more than once of a line from Jim Jarmusch's Dead Man where William Blake raises a gun and asks his prey if he knows his poetry. In Thana's death at the tip of a knife one of her female co-workers brandishes like another erect penis, Ferrara presents a difficult-to-watch betrayal during what is essentially Thana's third rape--this one finally fatal. Lund plays it remarkably, her mouth a red gash, her eyes registering that what finally lays her low isn't the men she's identified as the tormentors of her sex, but a sister-in-arms who's better learned the camouflage and the rules of the game.

A film midway between Marnie and Repulsion (and remade essentially by Kimberly Peirce and her Carrie redux), Ms. 45 is a classic of smart, sensitive genre filmmaking. It's the movie John Avildsen's Joe touted itself to be--the true fana, the true corrective, if you will, to the type of exploitation filmmaking it's always been mistaken for. Economical at least, fleet even, it has about it the broad strokes of a fairytale. Although it's pretentiously intellectual and loaded with confused religiosity (the image of Thana kissing bullets before loading her gun in full habit is hardcore legend), it never feels leaden. That's another of Ferrara's gifts. He's smart as hell and people never really talk about that in relation to his pictures--though none of his pictures is stupid. Ms. 45 is most crucially, however, a film that allows that a woman's power is located in her sexuality while simultaneously acknowledging that violence is almost always expressed through masculine implements. It's a gender study--a remarkable one, really; consider the moment, almost like from a Leone, or a dream of Leone, where Thana positions herself at the centre of a circle, with four men taking positions at four corners. It's like a ritual, or, like the shootout at the end of The Good, the Bad and the Ugly, the image that's become ritual. It speaks to cycles spinning eternal, and to roles we are all slotted to play, the casting accidents of our birth. Play nice.

Mine was in a dorm room off a digital rip from a VHS, but it was still pretty damn furtive.

It's on DVD, btw. Just gotta import that shit.