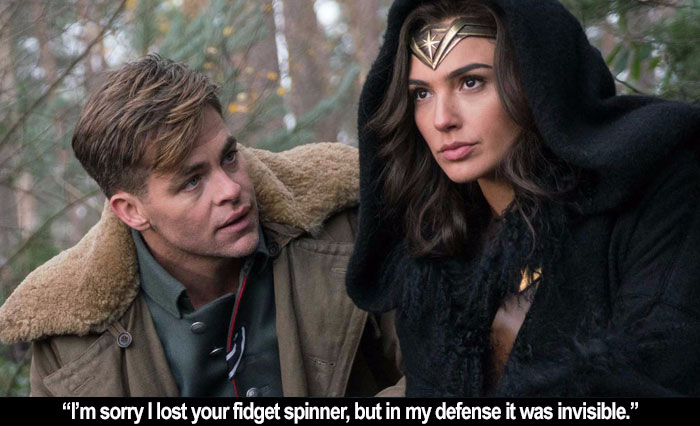 by Walter Chaw Patty Jenkins's Wonder Woman gets it. I knew it the instant Wonder Woman (Gal Gadot), stationed in a trench on the Western Front some time in the last days of the Great War, decides not to let people she could be saving die, and climbs into the poignantly-named "No Man's Land." "No Man's Land," right? But maybe a woman's. The fight choreography isn't very good here, but the film is less about that than it is about why we fight. It asks that question a lot. At the moment of crisis, once Wonder Woman realizes who she is and defines herself as a hero, she declares that she fights for love. It's more courageous to say something like that, baldly and unashamedly, in this, our age of sophisticated, sardonic, superior detachment. That's why I cried when she climbs into battle in an unwinnable conflagration, because, you know, this is the DC movies harking back to the Christopher Reeve Superman to present us with a nostalgic view of superheroes, from when they cared a lot about us. When they fought for love and not Byronic self-actualization or to avenge some petty slight. When our heroes believed in us, more than we believe in ourselves. When they were, in fact, the best version of who we wanted to be.

Wonder Woman is a standard creation myth that nonetheless earns its comparisons to Captain America: The First Avenger. We're given a semi-torturous explanation of how it came to be that a society of Amazons live in isolation on an island in the middle of the Atlantic, invisible to outside eyes and free of schnoo-schnoo. (Alas, the film itself is not similarly free of schnoo-schnoo.) Yankee flyboy Steve (Chris Pine) crash-lands close by, leading to the freshly-training-montaged Princess Diana (Wonder Woman) plucking him from the ocean and thus inviting, however inadvertently, the troubles of the world into her island paradise. The opening hour is handled in a solid, workmanlike fashion, from the rebellion of little girl Diana through to the grown version receiving her call to action, and boyfriend, and quest to London, where she intends to slay the god Ares on behalf of her father, Zeus. The second half is solid and workmanlike, too, a pleasant fish-out-of-water empowerment exercise wherein Diana gets to comment on the restrictiveness of women's clothing ("How does a woman fight in this?," and, "Is this what passes for armour here?"), turn the tables on various male attackers by being stronger and more capable than them ("I am simultaneously frightened and aroused!"), and finally getting her wish to be frontlines of the battle, the better to find her nemesis and, in her mind, cure all the ills of the world.

The first superhero I cosplayed as a child was Wonder Woman. I loved the TV series. I made bracers out of styrofoam cups. I drew stars on them in ballpoint pen and a jumping rope was my lasso. I was attracted as a kid to how she was always underestimated before proving herself spectacularly. Whatever its insufficiencies in hindsight, the show taught me as a child to respect women. She was confident in herself. She was raised right. It was what I was not, and I wanted, when I was underestimated, to be able to prove people wrong to underestimate me. I love how this Wonder Woman also wears its heart on its sleeve. It's earnest. It's sloppy with its affection for this character and, more, for this character's affection for the world. Jenkins finds the right tone and this paves over any number of narrative concerns. Wonder Woman is charming, some would say corny. I was surprised how much I needed that. Credit Gadot for playing Wonder Woman as Thor. It's a performance that hides any of her own performative inadequacies. She's a child god who speaks in declarative sentences and asks obvious questions. She asks why Steve isn't sleeping with her on the deck of a boat and it works. She is a reminder that we make things very complicated when, in fact, most things are very simple. It's a testament to Gadot and Pine that a scene where a misunderstanding about his penis comes off as kind of cute instead of pretty disgusting. There's a moment later on they can't save, though, when Wonder Woman experiences the first of what we presume will be many disillusionments with mankind and awkwardly brings the film to a halt at the point it needs to slide to the end.

Wonder Woman is a conflicted movie in a lot of ways like that. It's working from a fairly bad screenplay (written by a man, comic and TV writer Allan Heinberg, working from a story by two other men) mostly bereft of fresh ideas--stock characters in stock situations with a stock hero fight that works the pedals and not a lot more. It's fascinating to watch Jenkins handle gags structured around how men are looking at Diana, constantly distracted by and commenting on her beauty, coming on to her in bars, watching her cross the street. Another woman calls her something like the most beautiful girl anyone has ever seen. It's all wrong. It assumes that this audience will recognize the sexism and scoff accordingly. Dangerous to assume. There's room to follow up on the satire, but not enough, and the movie takes chances in that regard (like when Diana tells Steve's secretary (Lucy Davis) that in Diana's culture, what she does is called "slavery"), but not many. Presumably, all is forgiven when she kicks ass; I'm not sure it is.

Better is how Jenkins refuses to leer at Wonder Woman at any point. She doesn't sexualize her. The film is successful for what it is because it's directed by a woman. It's worth considering the nuclear-grade disaster this could have been with a guy at the helm. What it's not conflicted about is how important ideas can be: the empowerment of women without resorting to making them into men (I adore the bit where, stalking around, Diana stops to coo at a baby); doing the right thing all the time and not accepting collateral damage as an inevitable price for victory; declaring without embarrassment that love is the only thing that can heal the rents in our tattered social fabric. Wonder Woman is pure in that way. It carries a strong message in spite of itself, its power moment coming when Diana declares that if they're looking for a hero, she's their man. We are. Looking for heroes, that is. If she's it, we could do worse.