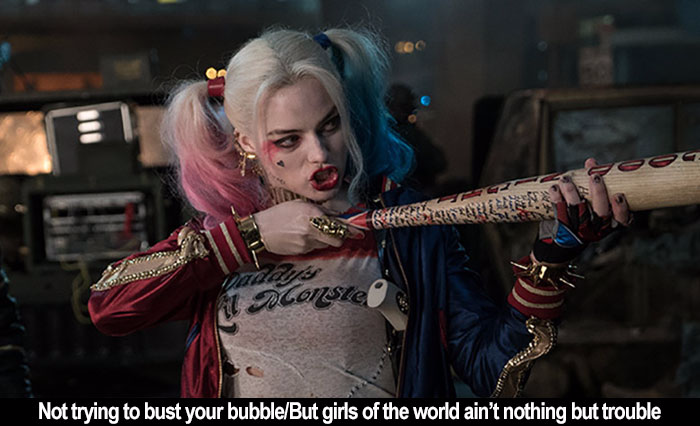 by Walter Chaw Ugly garbage that will make a lot of money, David Ayer's Suicide Squad begins where Batman v Superman left off by positing that in a world without its big, mopey, solipsistic, Byronic Boy Scout, there will come a time when the good guys (i.e., us) will need to enlist the help of a bunch of psychopathic mutants and contract killers to protect our way of life. It's a little bit like Escape from New York but not cool and not fun; and it's a little bit like a satire, except that it's more of a documentary. Marvel films are aspirational and DC films in this new cycle are diseased and beaten. Both are bloated beyond repair and slavish to a core fandom they daren't betray, making them essentially unwatchable along their tentpole storylines--though you want less to kill yourself after the Marvel films. The bright light lately has been one-offs and side projects: Marvel's television universe, for instance, has blossomed on Netflix and DC's own TV series "The Flash" and "Supergirl" seem to hear the music. Then, of course, there's Guardians of the Galaxy. The only thing worse than the kernel of an idea at the centre of Suicide Squad is its unlikely choice of writer-director to bring it to life, Ayer, perhaps the most vile, pessimistic filmmaker in the United States, whom Warner Bros. has given the task of appealing broadly somehow with this material: a little softening here, an extra scene/hero moment there after gauging the breakout star from the reaction to early teaser trailers. If you're going to hire Ayer to do this, make it a hard-R and take out the yuk-yuk comedy. He's not funny. He's not for kids. The strain of pleasing dozens of masters shows. It shows in the select mix of fondly-remembered oldies à la Guardians of the Galaxy, and it shows in the flop-sweat of an entire production so badly compromised by its too-big star and its too-threatened masculinity.

Suicide Squad invites the comparison, so compare. Compare the use of music, how Guardians opens with "Come and Get Your Love" while this opens with a pop medley ending in "Sympathy for the Devil." One sets mood smartly and ebulliently, the other is obvious, obsequious, pricey. A good song for a shootout? Sweet's "Ballroom Blitz," natch. And use that Queen song from the trailer, because we got a good response from it. And shoehorn in a bunch of scenes that don't work and don't fit so that Harley Quinn (Margot Robbie) can have a hero moment in an elevator. But allow me to direct your attention instead to a galvanizing exchange at the very end of perhaps the worst ten minutes in film of 2016, where our antiheroes stop in a bar to exchange witty banter (thus fulfilling the second-half quota of LIGHTHEARTED) written and paced so glacially you can actually feel yourself getting older.

Harley: (suggestively) "Yeah, you are!"

Empowerment, right? Or something. I'm only familiar with the Harley Quinn character from "Batman: The Animated Series", which is, for my money, among the very best things that television has ever produced. I mean it. The two-part "Feat of Clay" episode offers extraordinary action; the "Heart of Ice" Mr. Freeze origin story has astounding, and real, pathos. I see Harley as something of a tragic figure who chooses insanity, falls for the wrong guy, then empowers herself to the point where she escapes an abusive relationship. The Harley of Suicide Squad isn't that. She's a dangerous psycho, but soft on the inside, wanting domestic bliss in every normal way with lover Joker (Jared Leto). There's a scene where he humiliates her, handles her, makes her a stripper, talks her into jumping into a vat of goo. Coercion. Hot? The way to handle this character's dream of domesticity is the way the show did it, or the way Tim Burton depicted Mrs. Lovett's vision of life as Mrs. Todd in Sweeney Todd: by having her fantasies feature a freakshow. But this Harley imagines being normal. She lacks agency. Without it, it changes her meaning entirely. Another scene shows Joker turning her into Harley in a Scottie-from-Vertigo sort of way, which is also gross. I need to better understand how it is, too, that being insane in short shorts makes you as good a fighter as the guy who doesn't miss when he fires a weapon, a team of SEALs, a crocodile man, and a fire demon of sorts. Anyway, at the end of that interminable scene in the bar, it's announced that the titular bad guys have been released from bondage, and so, immediately, in the one instance of good timing in the whole mess, Boomerang (Jai Courtney, playing Tom Hardy) stands up from the bar and leaves because he's free to go. As he should.

Don't worry, though: in this kinder, gentler Suicide Squad, he comes back later in the name of teamwork or some happy horseshit. The premise is that badass suit Waller (Viola Davis), called "gangster" at one point by Will Smith because empowerment (right?), has this plan to create a Justice League to combat the superhumans of this brave new world. During the mid-credits sequences, she will also be the person who learns Bruce Wayne's secret identity, since no one is watching over the DC Cinematic Universe. Her insurance policy against them going rogue in the wild, aside from the explosive charge in their necks (like The Running Man!), is Gozer (Cara Delevingne), who, when she's not being Gozer, is crying and shivering and in need of her man to protect her from the big bad world out there. Her man is Flag (Joel Kinnaman), a supposedly great soldier who's not a greater soldier than a girl in fetish-doll gear because empowerment. Gozer is very old and has a brother who is the giant samurai from supervising producer Zack Snyder's also-empowering Sucker Punch. Together, they take over a city that is mostly evacuated, and set about building a super weapon to rule the world. We see this because of images broadcast over satellite of the satellite system getting destroyed. (Chew on that for a second, smarty pants.) This means the Squad is on an Escape from New York mission to participate in The Raid, but not before Will Smith tries very hard to be Keanu Reeves in John Wick and succeeds only in stoking the fire for the upcoming John Wick sequel. There's an entire "action" scene that has Smith standing still and shooting at targets. It goes on forever. For what it's worth, I Google'd the "Deadshot" character, and in almost every image I saw he's wearing a mask. The in-film explanation for why Smith's Deadshot rarely dons his mask doesn't make any sense; I assume it has something to do with how famous Will Smith is and how it would be a pity to cover up that billion-dollar moneymaker.

Anyway, just like in other David Ayer films, women are brutalized throughout Suicide Squad. There are egregious examples that smarter people than me will enumerate, but my favourite is when Slipknot (First Nations actor Adam Beach) gets off a helicopter and, as his first order of business, punches out a woman soldier standing at the door because equality. When you don't know how to handle women characters, there can be a lot of explanations. When punching a woman in the face ("She had a real mouth on her!") is a casual hardy-har-har, a lot of explanations are required. Later, Slipknot is made an example of--the only of our ne'er-do-wells to die ignobly in this increasingly-puzzlingly-named film--because how much representation can one film handle, amiright? There's an Asian woman--a good guy, I think--called "Katana" (Karen Fukuhara) who doesn't speak English until she does. There's also this thing about getting a PG-13 rating, so the minions of Gozer are charcoal humanoids or something that used to be people but are now just automatons you can bloodlessly dispatch. Sort of like the battle robots in prequel trilogies. Just like, in fact. Consider that at the end of it all, the whole movie is basically a white guy trying to save his white girl. Ask yourself from what.

Suicide Squad is a disaster of groupthink. It's a reaction, not a movie. There are things in here I'm willing to bet weren't in here before Batman v Superman made everyone sick. They stick out like the equivocating bullshit they are. The movie wants to be edgy, but all of its characters are given backstories that make them tragic. It's like "Dexter" in that way. Fanboys defending bad art, will you also defend a movie that de-balls your favourite naughty comic? Afraid to have psychos as heroes, the picture makes them misunderstood, tender on the inside. Deadshot gets an adorable daughter (Shailyn Pierre-Dixon). At a climactic moment of crisis, he's so crippled by her sweet image before him that he almost fails to perform a truly heroic gesture; after a film full of shooting charcoal briquettes, he suddenly grows a conscience about shooting a bag of explosives. Why? Should we talk about the scene where Deadshot sees a daughter-sized store mannequin and holds back a tear? No? Maybe later. Earlier, Harley casually calls him a "textbook sociopath," except that he really loves his daughter, so maybe we're wrong about him. Maybe we're wrong about all of them! When Deadshot gets a chance to visit his little girl, he spends it doing math homework with her. Edgy! Better than firebug Diablo (Jay Hernandez), who murders his entire family in an insulting flashback but is real sorry, yo, before he succumbs to Production Code morality. Better than Joker (Jared Leto), who is basically used as an emergency plot device and to facilitate a stupid cliffhanger setting up a sequel or some shit, and is completely irritating rather than frightening. Justin Bieber could have played him as himself. Suicide Squad fails at every single thing it attempts. It's porn for children. It'll make a ton of money, cause a lot of head-scratching and impotent conversations and mild outrage, and then Trump will be President and we'll deserve it. Can't say we haven't been warned.