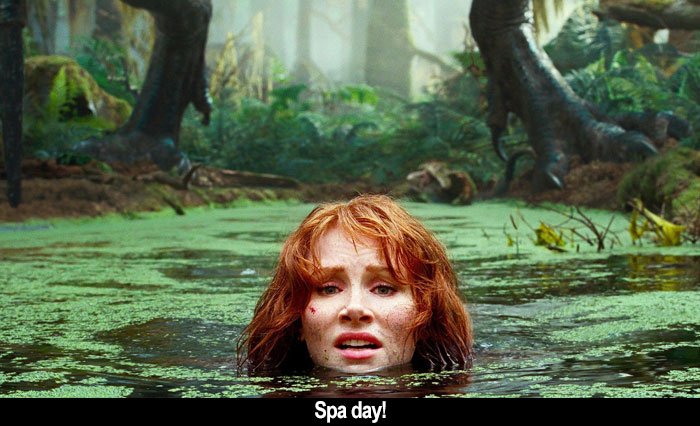 Less a movie with a plot than with a central intrigue, Dominion is about a proto Elon Musk figure named Lewis Dodgson (Campbell Scott), who has cornered the market on dinosaur engineering, using the privilege to create giant locusts that eat every crop except for the ones also engineered by Lewis's company. "But, famine," protests beleaguered, longtime series science guy Dr. Wu (B.D. Wong). "But, profits!" says evil capitalist Lewis Dodgson. And then there's Owen and Claire and Maisie and, for some reason, Drs. Ellie Sattler (Laura Dern) and Alan Grant (Sam Neill), called in to hobble around flirting awkwardly and doing their best, not to mention Jeff Goldblum, returning as Dr. Ian Malcolm no doubt to cash one more giant paycheck before Geena Davis's tell-all autobiography drops in a few months. There's a scene cribbed from the original Jurassic Park where our heroes are chased around an overturned jeep. There's a scene on a frozen lake that I didn't understand in that I couldn't tell you how exactly they get off the lake. There's an airplane crash taken from Indiana Jones and the Temple of Doom, sort of, that I similarly couldn't reverse-engineer if I tried. And there's a three-way dinosaur cage match that I assume was meant to evoke a kaiju "this fight isn't about us" battle teased by the Japanese tourists in the second Jurassic Park but ends up being this underlit bit of flapping around with no real stakes. Oh yeah, I almost forgot the parkour-lite sequence where Claire outruns and out-jumps a velociraptor and another where Owen rides circles around a few velociraptors on his dirtbike. It's true, the 'raptors in this film are as coordinated and fearsome as emperor penguins. Dominion sucks--and not in the good way. It's overstuffed with characters it has no idea what to do with, and its dinosaurs are almost an afterthought, from the anthropomorphized 'raptor Blue (who's given a send-off straight out of The Yearling) to countless magic-hour landscape shots of triceratops walking around with elephants and parasaurolophus running with wild horses. The ostensible stars of the show are wallpaper, and the actual stars of the show are paste.

Aside from the pure, jaw-dropping spectacle of a creative team shitting the bed on one of the biggest slamdunks of all time, the element driving Dominion is rage. Not the thoughtful rage of Fallen Kingdom but, perhaps unsurprisingly, the nasty rage of Trevorrow's first Jurassic World--the one so gruesomely misogynistic that it punishes and mocks its women characters for being sluts and respected corporate leaders. I compared Jurassic World to a porno flick and said that while it's awful, it's also kind of awesome in its unapologetic racism, hatred of women, and cruel violence. Dominion is all of the awful with none of the outré. It wants to play the nostalgia game, to manufacture chills with a Tim Burton gag where the Gigantonosaurus or somefuck pauses for a moment in front of a conspicuously circular architectural feature like the Batwing framed for a second against a full moon, yet the hero moment, where both sets of protagonists from the two "Jurassic" trilogies stand backlit at the finale, is as cold and hollow as the Photoshopped head-bouquet poster for this film. Instead of punishing the audience for its prurience, Dominion wants to gratify the audience for its sentimentality. Rather than present thorny questions about the ethics of not just dino-resurrection but human cloning as well, it crafts three family-reunion melodramas: two human and one reptile. (They're all reptiles, who're we kidding?) And the rage? Consider the murder of one dinosaur that involves face-tasing, mouth-spearing, and multiple stabbings; it's suddenly Sympathy for Lady Vengeance, and I have no idea what anyone is so angry about. Dominion is the perfect film for this desensitized moment during the fall of our empire: a cacophonous, non-specific atrocity exhibition fuelled by using our fondest memories of wonder as combustible compost. The only option left is to suffer it on the chance there's a brighter day at the end of this foul tunnel. I suppose the picture's message is not unlike that of the vastly superior Top Gun: Maverick in preaching the gospel of family first and only--but the families in Dominion are either loveless mockeries of family or dinosaurs literal and figurative. Maybe that's the point.