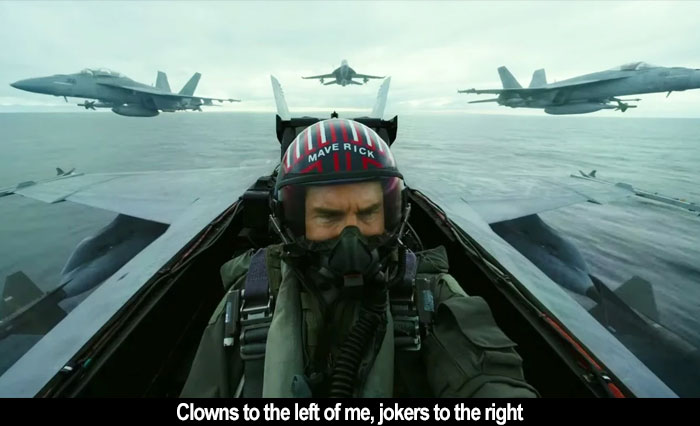 by Walter Chaw Joseph Kosinski's Top Gun: Maverick (hereafter Maverick) does everything the Tony Scott original did well a little bit better and doesn't bother with the rest. What drives this legacy sequel is the sobriety with which it addresses the passage of time--the existential horror of being the oldest person at the bar, of all those pictures that look like what you think you still look like, of the toll of watching your children outgrow you while every anchor you have to this world withers and dies. It is, in other words, a spectacular action film and a mature character drama whose closest analogue might be Danny Boyle's T2 Trainspotting--a film that, likewise, took its cue from a showy and popular first film and forged from it a work of real substance and surprising pathos. What's most impressive is how balanced Maverick feels. Its action component is plotted out like an elaborate, aerial heist flick with the stakes obvious and the steps delineated cleanly and simply, so that when it finally comes time to set the dominos in motion and things inevitably go wrong, it's clear how they went wrong. The picture's dramatic component is as carefully metered: the love interest and her expectations; the lost father/orphaned son dynamic and how to salvage it; the old rivals-turned-friends and what they owe each other at the end. Maverick is a clockwork, a model of efficiency and effective storytelling; there are multiple avenues to appreciating this movie. I was afraid a sequel to a macho, homoerotic recruitment video bankrolled by the United States military would have no sense of its silliness. I'm happy to be wrong.

Pete Mitchell, a.k.a. Maverick (Tom Cruise), is a 40-year Navy vet who, although he's a heavily decorated pilot just two bogeys away from wartime "Ace" designation, remains stalled at the rank of Captain. Indeed, the only reason he hasn't been court-martialed out of the service for insubordination is that his friend Iceman (Val Kilmer) has progressed to nearly the top of the Armed Services food chain and periodically picks up the phone to get him reinstated. Good thing, too, as a new threat arises in a soon-to-be-operational Death Star, guarded by a long trench bristling with automated turrets. Destroying the Death Star will require crackerjack flying and then a direct hit on a tiny exhaust port. At a moment of crisis, a young man will hear the voice of his mentor in his head, telling him to "stop thinking" and let the moment guide him. The only person still versed in last-gen fighter aircraft (the only kind that can do this mission, I don't really know why, it doesn't matter--wait, why not drones? Never mind, it doesn't matter) is Maverick, and so reluctant CO Adm. Simpson (Jon Hamm) recruits him to train a gaggle of peacocking Top Gun graduates, including a Vasquez named Phoenix (Monica Barbaro), a Drake named Hangman (Glen Powell), and the son of Maverick's dead best friend Goose, call sign Rooster (Miles Teller). If all this sounds terrible, it's somehow not. Even more somehow, it's exhilarating. Also, Maverick is reintroduced to an old flame, Penny (Jennifer Connelly), who runs a sort of Happy Bottom Riding Club for the Navy. And that's not the only thing Maverick borrows from The Right Stuff, as a fun prologue reveals that Maverick became a test pilot, pushing the envelope to challenge that ol' demon that lived in the air--not Mach 1 this time, but Mach 10. Of course it borrows Ed Harris for that prologue, because Maverick is blessedly aware of the debts it owes.

There's a scene that sums up why the movie works, in which 59-year-old Cruise climbs out the window of 51-year-old Connelly's bedroom and tries to hop down to the ground from the second floor. He hits stiff-legged, overbalances, and falls over on his ass with an "oomf," only to discover that his girlfriend's daughter (Lyliana Wray) has witnessed this would-be stealthy escape. It's a good laugh played well, and then the teenage girl tells him not to break her mother's heart again. In one sequence, there's the sweetness of old people being frisky, the comedy of old people trying to do things they're no longer physically capable of doing (and they say Tom isn't a good actor), and the self-respect not to make these characters flip and ridiculous. There are no victims in Maverick; even the preening "villain," Hangman, is allowed moments of self-doubt and, ultimately, selflessness and heroism. Maverick realizes he's reached the end of his career and promises Penny he's going to settle down, and he means it. He realizes Rooster will likely never forgive him for the recklessness that contributed to his father's death, but both allow that there might be an opportunity to forge a different bond as adults. For all its pyrotechnics, Maverick is mainly about an old guy trying to atone for being a son of a bitch in his youth, one whose arrogance got his best friend killed. As a fantasy of heroism, this version where the hero is the one who admits he is wrong, shows remorse, and wants to make amends is the version I can get behind in middle age. The old Maverick was complete unto himself; this "new" Maverick is a work in progress. That's what I like most about this stage of Cruise, paired up once more with long-time collaborator Christopher McQuarrie as his producer and co-writer: this acceptance that all things must pass, even for Maverick--but wasn't it grand when we believed for a while we were right, and good, and could change the world by ourselves? After the grand flying sequences and explosive finale, the only victory Maverick's won is the faith and love of the people in his life. And that's, all in all, enough.