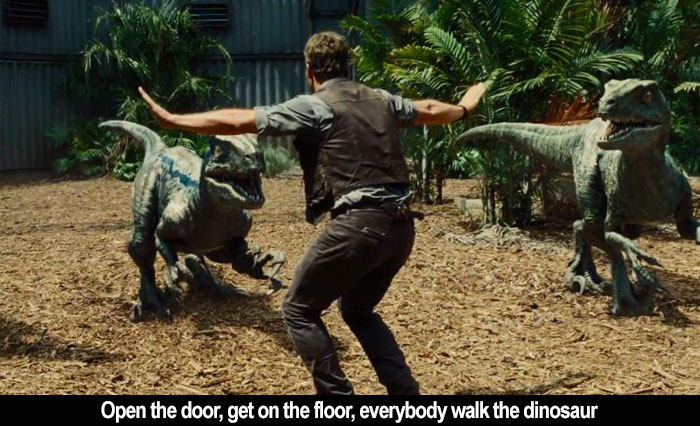 by Walter Chaw Jurassic World is Dada. It is anti-art, anti-sense--wilfully, defiantly, some would say exuberantly, meaningless. In its feckless anarchy, find mute rebellion against narrative convention. You didn't come for the story, it says, you came for the set-ups and pay-offs. It's history's most expensive porno: broad characters in familiar situations and then the fucking and the money shot. There's a scene in the first third where raptor-wrangler Dirk, or is it Chet? Shane? No, wait...Owen (Chris Pratt), yeah, Owen, tells uptight eventual conquest Claire (Bryce Dallas Howard) that his raptors are driven by eating, hunting, and *grunt--fist-push--grunt*, and surely Claire must be motivated by at least...one...of those things. Cue the throbbing bass and dirty guitar. There are also constant call-outs to the first film, old enough now to be held as totem to a generation of people wanting to recapture that initial experience. Jurassic Park was similarly a bad movie with great set-pieces; what time has taught us is that it hardly even matters if these films have human actors in them as long as they don't waste too much time on them. It's fantasy gratification, and the fantasy it's trying to gratify is that you can lose your virginity again.

The heroic older brother/kid brother pair à la San Andreas conists of Zach (Nick Robinson) and Gray (Ty Simpkins), sent away by weepy Judy Greer--who plays the mother who appears for a few minutes in Tomorrowland, too--to spend time with frigid careerist Aunt Claire. You could say that Jurassic World is misogynistic, but if it is, it's misogynistic in the way that those dinosaurs at the corner barber shop are misogynistic. It's too decrepit to know any better. Ex-Navy guy Owen trains raptors. To improve attendance at the park, evil Asian Dr. Frankenstein (B.D. Wong, returning from the first film (and playing the heavy a lot lately)) creates an Abominasaurus Rex, er, Indominasaurus... Unobtainium? It doesn't matter: the dinosaur is an asshole and representative of the cinema's fourth prominent A.I. this summer. Another girl, after Ex Machina's Ava (modelled on porn preferences) and Tomorrowland's Athena, run amok, resentful of her creation, looking for her place in the world, and willing to take down her creator in the process. The usual warnings are pronounced and ignored; there are references to Aliens and Jaws and of course Jurassic Park; and anyway, a lot of people are eaten and dinosaurs fight each other.

There is, conservatively, an hour or so of connective tissue missing from Jurassic World. All the parts where older teen brother Zach (Nick Robinson) sulks about leaving his girlfriend for a week of fun at the titular theme park lead to, in the most confusing way possible, Zach making doe eyes at collections of free-range girls. Is he having troubles with his girl? Is he just a typical teen, all of hormones and badly-restrained impulses? Is he ironic counterpoint to the film's theme of nature vs. nurture, on which side it doesn't entirely know where to fall? Perhaps he's meant to be the Id monster of The Forbidden Planet and Jurassic World the poltergeist of unrestful pubescent sexual turmoil. It would partially explain, for instance, the long homage to The Birds that forms the picture's most delightful mayhem. It's all Nick's fault, you see? The mind wanders to wild speculation when the film does nothing to connect the dots. It's so disinterested in its characters that every interpersonal interaction plays like a Rorschach blot.

How about sidekick raptor wrangler Barry (Omar Sy), who gets a remarkable moment when Cheney/Blackwater Security chief Hoskins (Vincent D'Onofrio) goes on a rant about owning living beings and bending them to do your bidding, but then is left to be saved by bwana in the bush? Again, if Jurassic World is racist, it's racist in the dustiest, most paternalistic way possible. If Mad Max: Fury Road consulted Eve Ensler, it's fair to wonder if Jurassic World consulted Paula Deen. It's telling that the actor poised to break out of this mess is pocket-Oscar Isaac Jake Johnson as a nerdy desk jockey given the bulk of wry humanity and comic relief. He's no less a caricature, but he's the only remotely memorable presence on the human side of things. The rest is given over to how Claire the control-freak screams for her nephews when Hannibal Lecter-saur is lurking nearby, and wears not-sensible shoes because they make her calves look fantastic, I guess. Claire will, of course, shake out her hair and climb on board the hot breedstock wagon by the end of it--long about the time the boys who were the stars of the film have been relegated to distant supporting characters.