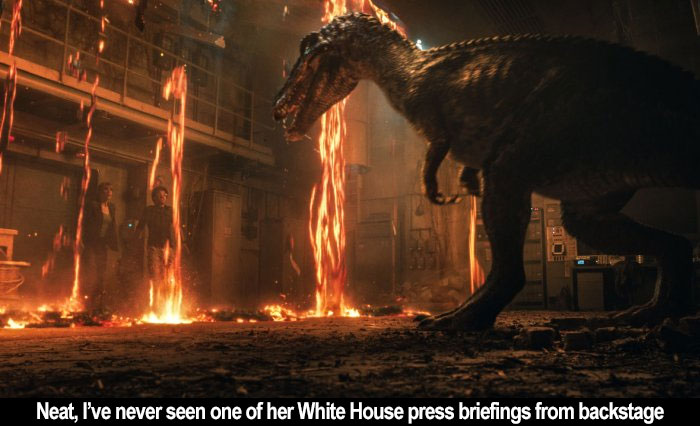 by Walter Chaw The first time I remember seeing the news crawl at the bottom of a TV screen used as a satirical device in a film was in Jonathan Demme's still-exceptional, suddenly-current remake of The Manchurian Candidate. In Spanish director J.A. Bayona's Jurassic World: Fallen Kingdom (hereafter Fallen Kingdom), after a grim opening sequence that sets the tone for the rest of the film, a news ticker declares that the "U.S. President" questions the existence of dinosaurs in the first place. It's a well-placed barb in the flank of the white evangelical monster that's swallowed the United States in a dystopia founded on equal parts massive ignorance and fear of an angry white god--one that has installed a demented con-man, and possibly the worst human being in a country teeming with bad human beings, as its golden calf. Hidden away in this pricey fifth instalment of a billion-dollar franchise is a Spanish Gothic fairytale of the titular "fallen kingdom"--the United States, n'est-ce pas?--that owes a lot more to Bayona's debut The Orphanage than to any of the previous films in the Jurassic series. It plays like Cronos, and it serves the same immediate function as George Romero's Day of the Dead, up to porting over the "Bub" subplot on the back of a sentient dino named "Blue." Where its immediate predecessor was a misogynistic funhouse paced to the story/action structure of a porno, Fallen Kingdom is stately to the point of reserved; immensely weird; and overtly critical of the current state of affairs. I'm not sure it's a good dinosaur movie, but it's an angry, swollen-red metaphor. All things being equal, I guess I'll take angry.

The plot this time around is that an evil rich white person wanting to get richer, Mills (Rafe Spall), hatches a plan to exploit the work of a smart Asian guy (B.D. Wong) as well as rescue a few dinosaurs from an exploding island he can then auction off to rich evil Russians and rich evil Asians. It's not clear why they want them, but the one they want the most is a new hybrid smash-up of the brilliant Velociraptor and something else, probably Stephen Hawking, producing a prototype "Endoraptor" that wasn't meant to be for sale because it didn't have a mother. This psychotic A.I. inevitably breaks loose in the palatial estate of ailing industrialist Benjamin Lockwood (James Cromwell), guardian of his granddaughter Maisie (Isabella Sermon), and starts eating people. But is Maisie actually Lockwood's granddaughter? One of the best and strangest twists of Fallen Kingdom is the revelation that the cloning technology used for dinosaur resurrection may now be used for people replication. It's a lot to unpack when one considers that Maisie is set up to be the double for the Endoraptor: an archetypal, Jungian shadow coupling that begins to explain the moments where the dino's claw almost gently caresses Maisie's hair, or another when it watches her sleep for a beat, during which time Bayona, in a beautifully-crafted scene, calls back to Henry Fuseli's painting "The Nightmare." One approach to Fallen Kingdom is to discuss Maisie's story as her process of discovering that she's a being created in the image of an immortal beloved, and in so doing dispel the monster lurking in the basement.

Another approach is to recognize that Fallen Kingdom is really an unsubtle apocalypse parable bookended by testimony from Dr. Ian Malcolm (Jeff Goldblum), who speaks in coded terms about how ignoring science and reason has resulted in a catastrophic moment leading, unavoidably now, to a culling rapture. It fits right in with First Reformed and Avengers: Infinity War, movies of the moment that want this conversation about how we're on the downhill side now. Goodnight, nobody. Goodnight, mush. The focus of its ire is on the wealthy in this country, desperate to acquire more wealth. Toby Jones is brilliant as a disgusting panderer. He says, "Four-million dollars is a slow Tuesday!" with the right kind of snarl. I don't think it's an accident he's coiffed with an ugly blonde swirl. It's also no accident that in a moment of anger, evil Bwana big-game hunter Wheatley (Ted Levine, truly unctuous) refers to token diversity hire and paleo-zoologist Zia (Daniella Pineda) as a "nasty woman," that the U.S. Congress is portrayed accurately as a bunch of feckless assholes, or that the term "megalomaniac" is used to describe the villain. The liberal agenda doesn't get off scot-free, either. Claire (Bryce Dallas Howard) from Jurassic World is pointedly introduced high-heels first as a tedious do-gooder manning telephones and drinking a latte in some action centre, making calls to the last people on the planet who answer their telephones when an unknown number contacts her. She convinces ex-lover Owen (Chris Pratt), who's building a cabin in a valley of course, to join her on a rescue mission, neither of them able to believe that the rich white guy bankrolling the expedition is exactly the type of asshole you expect him to be. There's also Franklin (Justice Smith), the other token diversity hire, whose fear of ghosts is balanced, you bet, by his being good with computers.

At its worst, Fallen Kingdom is trapped by the expectations of tentpole filmmaking. At its best, it's a pitch-black, brooding, sometimes ravishing eulogy to whatever hope is left in this country. "It's a...it's a Jurassic...uh...world," says Malcolm in his most Goldblum way, and as poignant, pithy coda, it functions brilliantly as a description of the state in which we find ourselves as a nation: bestial and, you know, no longer at the top of any food chain, physical or moral. In addition to the above-described Fuseli shrine, an extended hunting of Maisie by the Endoraptor includes images that suggest a living gargoyle, lit by shapes in shadows and intimations of bad intentions. All these tableaux call back to the picture's haunted underwater sequences, where a blinking red strobe stands in for one monster and lightning illuminates another predator's progress through a rainstorm. The conclusion of Fallen Kingdom's mansion set-piece works as a direct reference to the conclusion of Georges Franju's Eyes Without a Face, with the bad "doctor" consumed by the animals he'd tortured and said animals freed by the little girl without a face of her own, who found kinship in their imprisonment. This is a visually beautiful film, a politically savage film, and a deeply-flawed film that struggles with its tone and shoehorns in callbacks to the original Jurassic Park two or three times too many. The deus ex dinosaur gag of the last-minute save from a previously-unnoticed monster is now just the cat-through-the-window of this franchise. Not unlike an MCU entry in that way, Fallen Kingdom is beholden to the beats that got it here--and the graft is never more obvious than when a director trying out something new gives the vehicle a drive. In another word, there's a lot of the screaming and running and stuff, but Bayona is more interested in the death of a single creature, standing at water's edge like the horse in Aguirre: Wrath of God, looking at its would-be rescuers before it's swallowed in clouds of ash and fire. I feel like that sometimes. One kind of death in front, another creeping behind, and all the innocence and hope I used to have just floating away.