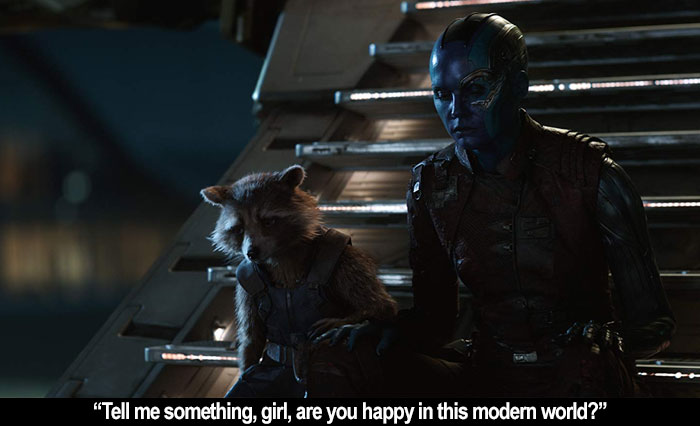 by Walter Chaw Marvel has a gender and diversity problem and it tries to address this, in real-time, in Avengers: Endgame, the last of their "Broadway Melody" cavalcade-of-stars studio extravaganzas (or so they say). In the end, though, it's still a solemn pageant of white saviours and their Christ-like sacrifices. The interesting thing about this storyline is that it explores both Christ the martyr and Christ the family man; there's enough blue-eyed soulfulness here to present both paths of the Choose Your Own Judeo-Christian Epic. By doing so, there's something for literally everyone in the film's target audience of men of a certain age and predilection to get emotional about. Yes, the tragedy of masculinity is to be misunderstood: we, Captain Americas (Chris Evans), all, shod in the clothes of Sisyphus and, in this iteration, literal God of Thunder Thor (Chris Hemsworth), who gets a dad bod, a bad case of alcoholism, and enough self-immolating insecurity and self-loathing to make legions of mediocre men misty-eyed in recognition. It's true, all of it, but underneath this disgusting robe and a hundred pounds of ugly fat is a Greek Adonis who loves his mother. It would be more enlightening to spend time with T'Challa (Chadwick Boseman) on the question of loss, or with Natasha (Scarlett Johansson), or, even better, how about Valkyrie (Tessa Thompson)? Instead, here's an extended comedy sequence where Thor drinks beer, eats pizza, and plays video games with his slovenly buddies. Bros feeling sorry for themselves, completely alone, drinking beers at the Gas-N-Sip with no women around. A recent poll told the story of how men aren't getting laid much anymore. In its way, Avengers: Endgame is a curious commentary on why that might be--and one way of many to look at its title.

But it tries. There's a moment in the midst of battle when it seems as if every single woman who has ever appeared in a Marvel film unites behind a contrived Powerpuff pose. It's desperate and forced, but there you have it, Marvel's very own "No Man's Land" sequence--or so they hope. Me, I was mainly curious what Mantis (Pom Klementieff) was going to do with her empathy during the Battle of Helm's Deep. Later, Thor bequeaths the crown of Asgard (now a little fishing community off the coast of New Jersey) to Valkyrie (Tessa Thompson), and Captain America gives his shield to Sam (Anthony Mackie), who was disposable enough a couple of films ago he was the only Avenger available to cameo in Ant-Man (starring Paul Rudd, still looking younger than Julian Assange). Avengers: Endgame tries so hard to be diverse racially and sexually, in fact, that it might get there with a few more minority voices in the room. I appreciate the effort, don't get me wrong, but change comes when the makeup of the room changes...no matter what Matt Damon believes. Without those voices raising concern, you get moments like the one where they show the broken and bloodied body of one of the few women in the Marvel Universe: an exploitative bit of horror to which the filmmakers don't also subject any of the mortally wounded male heroes. Or moments like the one where the Wakandans are used as racial stage-dressing before badly diminishing Black Panther's prowess on the battlefield. The answer, after all, is not in shoving Pepper frickin' Potts (who will never not instantly associate in my mind now with jade eggs and steamed vaginas) into a special "hers" Iron Man suit. In other words, without a diversity of voices, what are doubtless good intentions feel like paternalistic tokenism. It wouldn't be as frustrating if the solution weren't obvious.

To recap, the Marvel Cinematic Universe started about eleven years ago by resurrecting '80s Brat-Packer and bad-boy Robert Downey Jr. as a genius engineer and arms dealer who revelled in his newfound fame as the destroyer of villages in an imaginary Middle East. I think I called that first Iron Man "garden-variety pop heroism/wish-fulfillment" at the time, and I guess I haven't really changed my mind except to say that this kind of golden-calving sometimes gives you the Pick-Up Artist (Bill Clinton) and sometimes gives you Fuckwit Antichrist (Donald Trump). The problem with simple is simpletons like it. Anyway, the MCU became a tentpole almost instantly, dominating the box-office here and abroad with the occasional exceptional genre piece (Captain America: The First Avenger, Dr. Strange, Thor: Ragnarok), though more often with politically and morally compromised pro-military recruitment videos produced in cooperation with Uncle Sam himself. Nearly two-dozen films have brought us to this climax, in which the surviving Avengers challenge supervillain/hipster philosophy undergrad Thanos (Josh Brolin), who's cleansed the universe of half its life, to, um, bring everybody back. If you've caught a glimpse of Disney's distribution slate, or seen the trailer for the new Spider-Man movie (starring Tom Holland), you already know how this ends.

What you don't know is that Avengers: Endgame is arguably the first time Johansson gets to act in these films, and she's extraordinary. There's an entire sequence where she's holding down the fort at Avengers Central wearing sweats, letting her roots grow out, and trying not to let anyone see her cry. When a friend shows up, she gives him her sandwich. Johansson is our most interesting actress (Elisabeth Moss may be making a claim for that crown, but the more the merrier!). Oft dismissed as a great beauty, she picks roles that are either commentary on her appearance or subversions of her appearance. The scene where she looks for her vagina with a flashlight in Under the Skin is given leagues of extra meaning by the fact of who Scarlett Johansson is. For her to have a showcase in this film is appropriate and gratifying; I would have watched three hours of her dealing with survivor's guilt and the insanity of being normal. She blows everyone off the screen except an understated Mark Ruffalo, her perfect foil. The film badly missteps in not pairing them off for this film's Prisoner of Azkaban quest sequence--I get why they couldn't, but it's a terrible pity. I love Karen Gillan's Nebula performance, too. She's actually sort of the star of this movie, and she carries it. Downey Jr. gets the Jon Lovitz Master Thespian bits his contract calls for, and Hemsworth gets to try on the Big Lebowski. Everyone else stands around looking concerned for the few seconds they can squeeze into the frame of this behemoth. If you're a fan, you're going to love it. If you're not, you'll survive.

Avengers: Endgame is ultimately just the end of a long Telenovela season full of misunderstandings, surprise reveals, complicated relationships, and sudden bursts of violence. Other dynastic Telenovelas, like The Fast and the Furious and Star Wars and "Game of Thrones", have instalments upcoming, while dark horse "The Conjuring Universe" drops new episodes now and again. If these extended stories grow more inclusive with popularity, more's the better. And if they fund the personal projects of their very talented creators and performers, well, that's what they're for, after all. There's nothing wrong with Avengers: Endgame, in other words: it's as good at being what it is as a platypus is a genius at being a platypus. And what it is is a martyr fantasy played by gods, Hollywood and otherwise. I took my thirteen-year-old boy to the sneak screening of it, making him the instant envy of his classmates. When it was over, he was admittedly disturbed by a few plot details and asked about one in particular. I said the Ancient Greeks used to use a device to literally raise and lower the actors playing gods into dramas to end them. I gave him the Latin term. Then I said it's not a problem with this film that it relies upon a deus ex machina, but a convention of the form. We've been memorializing Achilles and Ajax--their rises and falls, their loves and reversals--in some form or another since we started telling stories. It's one of the ways we explain how the bad sleep well and the good die young. The only pity is that the message never loses its timeliness.