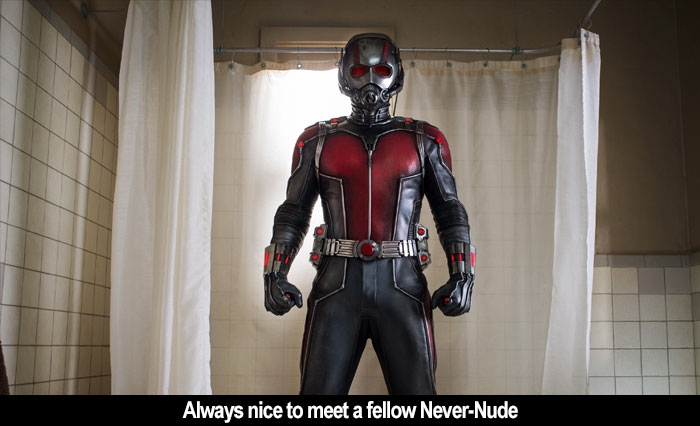 by Walter Chaw You've got to feel for director Peyton Reed, the Tobe Hooper to Edgar Wright's Steven Spielberg in a film, Ant-Man, that will forever be discussed in terms of lingering evidence of Wright's contribution following his very public divorce from the production. Reed's like the guy dating the supermodel: everyone's looking around him to see the main attraction. Indeed, multiple moments are clearly the product of Wright's sensibility--the flashbacks, in particular, where characters speak in the exact cadence and rhythm of narrator/sidekick Luis (Michael Pena). There are multiple moments, too, where it could be speculated that the movie would have played a lot looser had Wright been allowed to see his vision through to the end. But what's there is still a pretty good palate cleanser. It's silly and aware of that without being snarky about it, only once or twice lowering itself to broad slapstick that, here we go again, I don't believe Wright would have let pass without some kind of edged stinger. At the end of the day, frankly, any film that references The Incredible Shrinking Man so beautifully deserves its moment on the stage.

That scene--where the infinite is discussed--places Ant-Man in the odd company of Big Hero 6 and Interstellar, pulling the father/daughter dynamic between hero Scott (Paul Rudd) and his adorable moppet (Abby Ryder Fortson) into focus for a moment and underscoring the idea that movies like this only ever work when they're grounded in recognizable relationships. Scott and his kid mirror mentor Hank Pym's (Michael Douglas) fractured relationship with his own daughter, Hope (Evangeline Lilly, still smirking); and there's just enough here about men and their little girls to offset the intense, prefab crappiness of a villain plot concerning an industrialist (Corey Stoll) who wants to use Pym's shrinking technology for evil. It's so conventional that, again, speculation runs to either the satirical ends that Wright, best known for his smart satires of the zombie and buddy-action genres, had planned or, worse, whether the reason Wright was jettisoned in the first place had to do with an unwillingness to play Marvel Cinematic Universe ball. The usual cadence of origin, training, minor showdown, major showdown, and table-setting is honoured, in any case, with a pair of closing-credits sequences that set up a sequel to Ant-Man and tease Captain America: Civil War. The novelty, safe to say, has worn off, and the practice is less Easter egg now than just something to be tolerated.

The film works whenever the inherent silliness of superheroes and the superhero genre are pinioned by clever visual jokes (the best a train derailment spoiled by the trailers), and it's elevated, too, by the pathologically-likable Rudd, the ridiculous slo-mo elegy for a noble flying ant, and an entire performance by a crotchety Douglas that recalls his Grady Tripp from Wonder Boys. He was born to do too-long-for-this-world shtick and Ant-Man benefits from his grey-haired Han Solo act. Douglas plays it straight, but he knows what kind of movie he's in. I also liked the idea that Ant-Man can control ants, and the Phase IV scenes of the little guys swarming around are both delightful and lamentably underutilized. The central geek-joke in the film is its most telling, as Ant-Man pays homage, twice, to Return of the Jedi: the first in a planning sequence and the second in a delightful "Death Star" run. It's telling because it's not just the type of thing Wright would do--it's the type of thing Wright would do because he knows that Return of the Jedi is a piece of shit that people of a certain age love anyway.

The best joke in the film, though, is what Scott gives to his daughter at her birthday party. It suggests the kind of sprung sensibility that Ant-Man would have done well to ride in lieu of its standard corporate shenanigans, references to Hydra, and an embarrassing battle with Falcon (Anthony Mackie) that plays like the worst sort of tokenism. I appreciate Ant-Man talking the talk about the lack of women in the MCU, the toll of mass destruction, and so on, but the pangs of conscience would've been easier to take were they not delivered in so vanilla-on-Wonder-bread a package. When Ant-Man squares off against Falcon, it speaks mainly to the idea that Falcon was the only one available, given that all the other Avengers are too important to hang around, guarding a warehouse. I don't want to complain too much, considering that any black superhero is a step in the right direction; I do want to note that a black superhero who is a custodian and embarrassed by a one-millimetre-tall white superhero isn't necessarily progress. Ant-Man ultimately is harmless, late-summer product. It's that thing you buy at a circus and throw away a couple of weeks later.