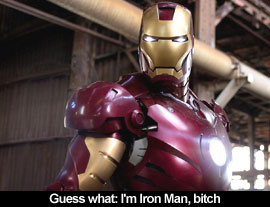 by Walter Chaw Iron Man is garden-variety pop heroism/wish-fulfillment that, marinated in Robert Downey Jr.'s effortless insouciant sauce, speaks volumes about the psychology of our nation at this disgusted, exhausted moment in our history. The plot's only casualties save its grand fiend are nameless Afghanis: terrorists on the one side, collateral damage on the other--few of them receiving the nobility of an individual death. Even the chief Al-Qaeda baddie is blown-up discreetly in the wings after a white guy first dazzles him with technology, then paralyzes him with the same. (Call it awe and shock.) The film's politics are easy and its racism similarly cavalier: Better dead than red (er, brown); when historians look back at this era in popular culture, it won't be terribly difficult to pick out that which forms the backbone of contemporary "Why We Fight" propaganda. What recommends the picture are sterling performances by Downey Jr., Gwyneth Paltrow as Iron Man's Girl Friday, Jeff Bridges as the mentor-cum-baddie, and wonderful, reserved, dignified Shaun Toub in a too-brief cameo as the sole voice of moral "otherness." What's unfortunate about the flick is that it takes an awful long time to get to the good stuff, and that good stuff--almost entirely CGI-rendered--falls curiously flat. Not quite boring, Iron Man just seems sprung. There's no forward momentum, no impetus, no real gravity. With all that firepower at its fingertips, it has no idea where to point itself.

Bajillionaire military-arms developer Tony Stark (Downey Jr.) is abducted during a tour of Afghanistan, gets a car battery wired to his chest to keep him alive (which he replaces with a clean-energy doodad), and proceeds to play out the late portion of the Greek Daedalus myth for anyone who cares to draw that kind of connection and its attendant scorn and barbs. He engineers his escape from a makeshift POW camp, declares that he's had an epiphany that you can't hug children with nuclear arms, and builds the iconic Marvel Comics Iron Man suit to better assuage his bleeding conscience. Some have already expressed relief that Stark isn't afflicted with Freudian self-doubt as well as that the film is free of the gravitas of the recent Batman and Superman reboots (and Ang Lee's Hulk, which, let's face it, keeps improving in the rearview)--which strikes me as depressingly, if predictably, anti-intellectual.

Yet the idealism that our military could eventually affect the sort of ideological sea change in the Middle East (if it's married to good press--note the two press conferences in the piece) that they, married to bad press, have so far been incapable of affecting, is intoxicating. In that pursuit, find an Iron Man so charming and at times effortless that for all the complexity of its situational intolerance, here we are with our legs up in the air and our hair akimbo. Iron Man is all-American, and I mean that in a good way. I realize now that I still have a red, white, and blue belief that victory in the Middle East is possible and defined by us somehow showing them that we're a spiritual, moral, idealistic people. The disconnect is that Iron Man, on its way to confirming to Americans that Americans have a conscience, also shows Americans to be paternalistic in the deaths of jabbering villagers in need of God-like Bwana intervention--and just the old-fashioned kind of racist in the casting of all its villains as ruthless terrorists living in sand caves.

Iron Man is also a monument to the military gap between the United States and the rest of the world. If Iraq I was a dry-run for the Chinese to test their military technology against the Yanks in a "neutral" (for them) battleground, consider it, too, a dry-run for the fantasia on display in Iron Man. (The technology in the film is pie-in-the-sky stuff, of course--sentient A.I. and cyborg components are at least, what, ten years away? Twenty?) Thomas Friedman of the NEW YORK TIMES has a lot of brilliant stuff to say about why NATO is derelict and almost all of it has to do with how far advanced is our military technology and commensurate ability to project that might into any corner of the world. Consider a scene where Iron Man rockets to the Middle East, saunters around to Led Zeppelin and AC-DC in an interesting/depressing update of the Wagner-scored helicopter attack from Apocalypse Now, and makes it back in time for a starlet elbow-rub covered by E! basic cable. If Batman Begins and Superman Returns capture how Americans think of themselves in their darkest, most introspective moments, Iron Man offers a glimpse into how Americans project themselves into the world as a giant, swinging, turgid dick. It's Dr. Strangelove but not as satire. Meanwhile, although Stark's alcoholism is downplayed, the casting of Downey Jr.--his personal backstory addiction-infected enough--lends the film a healthy degree of vital self-awareness: this Stark's drug of choice isn't firewater, it's leggy blondes and technophilia in the form of making things in racing red that blow up real good. (Note Stan Lee's requisite cameo as Hugh Hefner.) The real insight offered by Iron Man is that, as a culture, we're no less addicted to it. iPods and Bluetooth and Summer Blockbusters that cost more than it'll take to rebuild Myanmar after ten thousand of their people are swept out to sea: Looks like a job for Iron Man. Originally published: May 7, 2008.