Telluride '13: Under the Skin 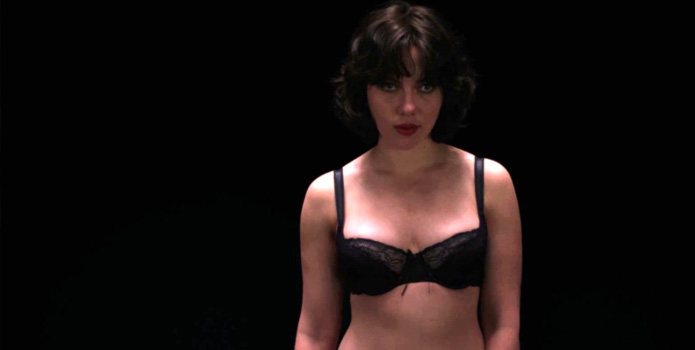 by Walter Chaw Trouble Every Day and The Man Who Fell to Earth as directed by Stanley Kubrick, Jonathan Glazer's astonishing Under the Skin marks his return to feature filmmaking after a nine-year hiatus. The loosest of adaptations, cherry-picking from Michel Faber's strong novel of the same name, Under the Skin is home to a trio (at least) of indelible images and a style and presentation that function as shunts into a thicket of thorny existential questions; it's the best film I've seen this year and among the best films I've ever seen. Stripped to the bone, as capable of viciousness as it is tenderness, it achieves what seems impossible by creating a sense of the mysterium tremens in the body of a human-looking alien. When it works, it's a stunner worthy of mention in the same breath as Blade Runner, but more significant than its immediate impact is its lingering afterimage. I liked it initially. In the six days since I saw it, scarcely an hour's gone by that I haven't thought about it. Under the Skin, not to be flip, burrows exactly there, and nests.

Isserly in the novel but unnamed on screen (let's call her "X," in honour of the Joan Fontaine character from Rebecca), X (Scarlett Johansson) is introduced dressing, going shopping and dressing again, then driving around the rainy Scottish Highlands in endless pursuit of young men. Once they're snared, something happens: Glazer pulls us into long, dark doorways where X disrobes, her conquests following suit, until one is swallowed in a reflectionless black. It's a metaphor, I think, but for what? The puzzle of Under the Skin is that it's not about anything it's ostensibly about--it has no literal narrative plot, no rises, no falls, and a character who, if she finds an arc by the end of it all, well, the nature of that arc is mysterious, too. Something ineffable happens to X from the beginning--when she pauses in the midst of something beastly to contemplate an ant with intense curiosity--to the end, when she contemplates herself with the same kind of scrutiny. Indeed, by the close, there's value in wondering if she is substantively different from an insect--if any of us are. The film challenges its audience to consider what element of humanity it is we claim as "sentient," a soul as it were, the thing that separates us from lower orders of life--from the machines we create to the enemies we dehumanize. Described as an alien-invasion film, Under the Skin is actually nothing of the sort. Think of it as more a nature documentary of a lifeform with absolutely no relationship to ours.

But what happens in the dark between X and her quarry? It's not clear that they die, although an astonishing late reveal suggests they're not having sex, either. Glazer shoots it minimally: X walking backwards, beckoning like a Hindu goddess, and the men stumbling after until they're engulfed in nothingness--their expression of hope, of lust, never changing to horror or, really, to any sort of understanding that something is amiss. Later, when one of the men is seen free, the mystery deepens, and the nature of the metaphor shifts. What is it that X is doing? The casting of Johansson, in and of itself, is a fascinating choice, in that she's something of a cipher and most effective as an object of yearning (as she was in Lost in Translation). She's amazing in this movie because she's the picture of alien remove: she looks like she looks (though Glazer has made her just exactly off--even her nude scenes capture her cold, insectile), and there's nothing happening behind her eyes. A scene on a beach that moves from horror to unspeakable horror is played perfectly: the chill of it roils off the screen, framed exquisitely by the skeptical maybe-repulsion of a body-surfer approached by X and the next scene in traffic, where X turns slightly to regard a crying baby in its seat.

Glazer spoke to me about X's curiosity--I would counter that saying X is curious is incorrect, because that's ascribing a human emotion to a character assiduously, studiously inhuman. It's jarring, then, when X demonstrates an extraordinary measure of humanity in noting that a severely deformed man has "beautiful hands." Moments later, we see the man pinching himself to be in the company of a woman who looks like Scarlett Johansson. The crowning achievement of Under the Skin is its ability to make us feel uncomfortable in ours. It challenges the male spectator's instinct to judge a beautiful woman, especially a famous beautiful woman, by her appearance, only by casting one of the most beautiful women in the world--and as it does so, it illustrates the ability of beautiful women to see past the obvious physical failings of the men they choose to love. It's the basis of the "Beauty and the Beast" story, after all, though I've never seen it so viscerally presented, in form and function, as a situation in which the roles can be so easily inverted.

A sequence fast following in which X gazes long into a dark mirror--an image echoed in the film's final minutes in a shot that, again, I can't seem to shake--implies...something, a change perhaps, certainly an instinct in ourselves to project meaning, to interpret and make sense of what we see by placing it in a familiar paradigm. Under the Skin offers no answers. Johansson has no more than ten lines of dialogue despite occupying nearly every frame--and what gorgeous, meticulous frames they are. There is latent, pregnant energy in this picture, a thrum of dread that underlays every frame. And yet there's also an ironic playfulness that permeates and suggests the intellectual, literary tingle of reading great, but obscure, philosophy. Under the Skin is a masterpiece.

Was pumped before, even more pumped now. Between this and Upstream Color (for the record, I am expecting this to be a lot better than UC, which I liked), quite the year for low-budget, elliptical sci-fi.

The cast and crew for this was pretty unorthodox. Scarlett surrounded by a bunch of no-names? Landin DPing his first film with any ambition? Micachu scored it? Can't wait.