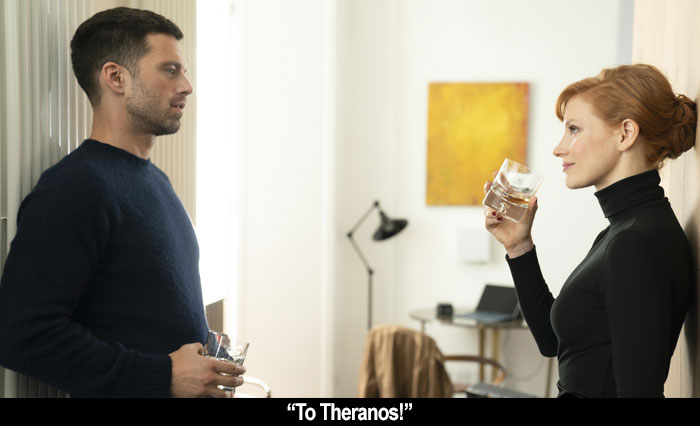 by Walter Chaw There's a moment early on in Simon Kinberg's execrable The 355 where Lupita Nyong'o, playing cyber-security expert Khadijah, is walking on a pier swarming with commercial fishermen, tailing a bad guy by holding her phone up like she's looking at her phone camera while it's recording him. After the third or fourth time they've locked eyes, she declares, with total seriousness, that she's been "made." No fucking shit you were made. If Lupita Nyong'o were walking along holding up a phone and staring at me from six feet away, I like to think I'd notice. Later, the reason given for Colombian psychologist Graciela (Penélope Cruz) tagging along on a very dangerous mission is that some dead guy's phone has been locked with her fingerprint. Because I'm able to remember that Khadijah is a cyber-security expert, and given that Graciela's fingerprint-bearing finger is sitting right there, I'm wondering why someone else's fingerprint couldn't be assigned to the phone. I'm also wondering where Sebastian Stan's CIA agent Nick found a crisp white T-shirt that doesn't stain when you spill coffee on it. That's some NASA shit, probably the technology everyone should actually be fighting over. Then there's the conversation where Graciela's son, over the phone, asks for "Duvalins," and Graciela responds, "Yes, I will bring you your favourite candy," which...okay, level with me--which one of them needed to know that Duvalins is candy? The first thing is a problem with direction; the next a script issue; the next, direction again; and the last another script issue. Meaning that while there might be enough blame to go around, I'm gonna put the bulk of it on co-writer/director Kinberg.

The idea to do a female-centric version of Mission: Impossible named after the alias of George Washington's female spy originated with co-star Jessica Chastain, who revealed on the endless junket for The 355 that she had neither a script nor a story in mind while putting the package together. I'm not certain that condition was ever fully addressed prior to the production's funding, casting, shooting, editing, or release. Chastain's "Mace" is a rogue CIA agent hot on the heels of an electronic doohickey that can control the world. She's paired with a rogue German agent named Schmidt (Diane Kruger) who's after the same thing, and soon enough Graciela and Khadija have joined the team as well. A pivotal character dies early on, which is intended to be a big Psycho-esque shocker but is clearly a red herring, because in the six decades since Psycho, apparently we've lost the nerve when it comes to sacrificing a star. Shit, since Executive Decision and Scream, let's face it.

Nothing is quite as cynical, however, as the stunt-casting of Chinese megastar Fan Bingbing, whose "Ministry" spy Lin Mi Sheng, well...any question as to how this film might have completed financing is dispelled by her presence. Have I mentioned that Sheng--hold on to your potatoes, Dr. Jones--fucking knows kung fu? Oh, how I've longed for Asian representation in an American film where they know martial arts. How entirely novel. She's mysterious, too, and maybe has her own designs on the world-controlling tech; if she had a giant mustache and were played by Christopher Lee or Warner Oland, I'd have a real good idea of what's going on here. The problem, though, is that should she ultimately be portrayed as a good guy and part of this heroic quintet they're putting together (however nonsensical that is, given that Graciela is only a shrink), then are the 355 sympathetic to Chinese nationalism? (Pssst, if the money spends, amiright?) I should add that Graciela never unlocks the cell phone she's there to unlock. I mean, seriously, if you're not paying attention, you can't really ask anyone else to pay attention, can you?

There's a scene where the 355 go undercover in evening gowns at a chichi event that is so familiar from all the movies this one wants to be the distaff version of that it begs the question of whether replacing men with women without providing a bump in quality is the kind of progress that makes a point--or the kind of "progress" that ensures no more chances are given for future projects aspiring to the same representation. Take a bunch of slack chase sequences, for instance. The first one, with Mace pursuing Schmidt on foot through the streets of Paris, ends with the two of them in the tunnels of the Metro, trains rocketing all around them. It should be exciting, right? The added element of subway cars zooming past as these women run about? But there's so little sense of gravity or rhythm to it, and the way it resolves, with one of them ending up in the cabin of a train, waving at the other sardonically, is so dead-tired that we're the ones left feeling the fatigue. Franchises like Mission: Impossible and John Wick have set the bar so high for movies like this that real innovation was needed to execute either the stunts or the world-building--any element that's at least different enough from the other pretenders to spark a cult.

What's most painful about The 355 is that its attempts at making the film more gynocentric have resulted in rendering the characters victims of gaslighting or abusive men, or anchoring them so hopelessly to their families that they become a predictable liability when the going gets tough. At the end, after a title informs us that two months have passed between the climax and denouement, all five of these women hilariously manifest in the apartment of a toxic man to serve him a little toxicity of their own. It's as awkward as the "Power Puff" tableau in Avengers: Endgame: evidence of male filmmakers who have no idea how to show female empowerment and so reach for the stupidest possible pandering. Why would Sheng, a Communist agent (or Graciela the shrink, or Schmidt the lone-wolf antihero, or Khadijah the brilliant computer scientist), need to be there when one of their number breaks up with her boyfriend? It's not just idiotic: If we're playing ball with The 355, it's a terrible idea within the movie's logic for these deep-cover splinter agents to run errands together.

There are a lot of tough-guy pronouncements ("The only place I'll join you...IS HELL"), gravid countdowns, and torture sequences--a checklist so obviously laid out on a set of index cards you can almost see the pinholes at the top of each convention. There's also a truly intimidating amount of time devoted to glacial exposition, plus dialogue sequences intended to deepen these characters and their loved ones that needed extensive pruning (because who gives a good fuck), a hilarious string of location chyrons over famous landmarks, and an entirely off-putting, self-serious tone that can't support scenes like the post-breakup drunk talk between reluctant allies Mace and Schmidt, with both actresses playing it as if The 355 were Chekhov instead of an expensive franchise non-starter. For what it's worth, the cast is game, although Kruger is the only one among them who's legible as an action hero. None of that matters, of course, when you do something like have the Asian one tell the redhead that they're all the same even if they look different as she's serving her "ancient Chinese herbs" that "do many things!" Later, she uses "ancient Chinese poison," and later still, I have to imagine, she has to pay some beaucoup Yuan to Calgon. The new Spider-Man movie will be blamed for this film going up in flames (that and misogyny), but The 355 deserves the dignity of imploding under the weight of its own considerable and mortal miscalculations. There's no world in which the picture would have been a success. It's embarrassingly half-baked and notably flaccid. Then again, even The Matrix Resurrections has its ardent defenders, so maybe there's hope yet.