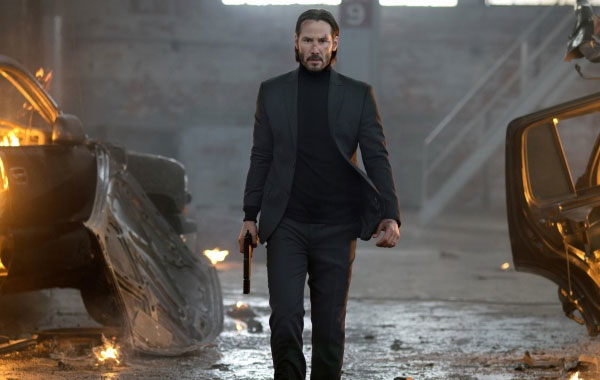 by Walter Chaw Essentially a remake of Kim Jee-woon's A Bittersweet Life shot through with oodles of late-'80s John Woo gunplay, stuntman-turned-director Chad Stahelski's John Wick is, damnit, really just so much fun. Existing in a fascinating universe that marks it as one of the better comic-book adaptations without origins in an actual comic book, it features Keanu Reeves as the titular angry guy, taking on the Russian mob because they killed his dog. That's it. The way John Wick gets from point A to point B, though, with a reliance on what appear to be practical effects and a strong, smart use of Reeves's sinewy grace and muscularity, is a thing of action-movie beauty. Ultimately, it's a showcase for elaborate stunt-work and fight choreography, and, because I'm starting to think of Stahelski's film like the films directed by Yuen Wo Ping, that's totally all right.

Wick, already grieving the death of his wife, gets his prize-Mustang stolen from his garage by Russian punks who, as a grace note, kill the puppy his dearly-departed left him with as an anchor for his humanity. It seems, and I don't want to spoil the best line in the picture, that Wick used to be a bad, bad man and, Unforgiven-like, is being pulled back into the game. As much a parody of this sort of "this time, it's personal" stuff as anything else, John Wick is nonetheless a revitalization of the genre that sees the value of squibs, the true offense of getting shot in the face, real cars falling from great heights, and teams of talented guys training for weeks to shoot five-minute sequences. Reeves is perfect as the man of potential and maybe surprisingly good in scenes where he interacts with Jenny (Adrianne Palecki), a fellow contract killer, and Winston (Ian McShane), the owner of a hotel drolly dubbed "The Continental" that caters to the peculiar needs of its elite assassin clientele. Cool? The film sweats cool. Best, it makes it look effortless.

John Wick is divided into a few exceptional set-pieces. Start with Wick's home the night of a doomed invasion that recalls the beach-house sequence from The Killer; an extended night-club gag is something I would kind of like to see again right now. There's a car chase/gun battle that astounds because I was pretty sure there was nothing innovative to be done with such things, and there's a final Lethal Weapon boss battle that gratifies for its careful, meticulous ferocity. The movie isn't about anything except care of presentation and craft but it provides both in spades. For all its essential emptiness, John Wick treats its audience with a preponderance of respect. There's a tacit acknowledgement in the care and effort taken with the film--as well as in its resistance to add commentary or import to the proceedings beyond a man avenging his dog--that even action audiences deserve quality. See John Wick as the antidote to Michael Bay--as the example of what Michael Bay films should look and act like. It's nice to see the Yanks catching up with Asian action finally.