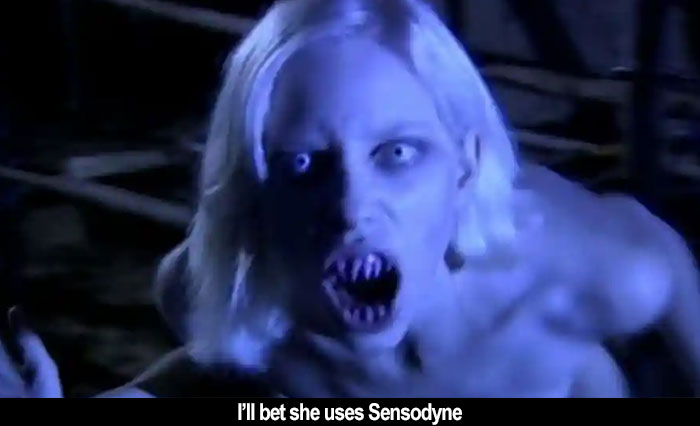 by Walter Chaw Carly's mom, Angela (Nathalie Boltt), killed a lot of people once and then fell into a coma, not that Carly (Carly Pope) would know, because Carly stopped talking to Angela years ago--long about the time Angela killed a lot of people. I mean, even if she had tried to talk to Angela, she wouldn't have been able to. Because coma. Technically, she could talk to her, I suppose, and the jury's out as to whether Angela could hear her, but being in a coma, Angela wouldn't be able to respond. Comas are a bitch that way. Anyway, a sketchy beard-o in a suit (not Sharlto Copley, which is this film's first and last surprise) from some tech company called Therapole reaches out to Carly and says, "Hey, what if you could talk to your mother?" And Carly says, "I don't want to talk to my mother." And he says, "She's in a coma." And she says, "Why is she in a coma?" Then she goes to the Therapole headquarters (erected on some kind of haunted burial ground, as her friend Martin (Chris William Martin) discovers while Googling stuff for her), since the news that Angela's in a coma has made Carly want to reach out to her. This is what we call in the business "a really good plot" and "solid writing." Seems Dr. Creepy (Michael J. Rogers, playing Sharlto Copley) has invented a virtual-reality technology that allows people to Dreamscape/Brainstorm themselves onto a holodeck of someone's memories using advanced Bakshi-era rotoscoping technology. It bears mentioning that Martin believes Therapole--not to be confused with Theranos--wants to find a demon to exorcise, the drawing of which resembles one of Giger's aliens. That's because the writer and director of this mess, Neill Blomkamp, didn't get to make an Alien movie like he wanted. It's the world's saddest Easter Egg--which says something, given that there's a Marvel Cinematic Universe.

Demonic is the proverbial rock-bottom for an artist who hit it out of the park his first time at bat. District 9 is a smart, brilliantly violent, socially relevant film that made great use of all the vfx technology developed for a never-made "Halo" movie. His career has described a precipitous downward trajectory since, each film more preposterous and tone-deaf than the last. He keeps getting these shots, one has to think, because District 9 was so great (it snagged a surprised Best Picture nomination in that year's Academy Awards), and he might be given a pandemic mulligan for this one. But boy oh boy is Demonic ripe. For one thing, it's incredibly boring, overburdened by plot and shot in a way that demonstrates no understanding of how to build tension. It features a completely conventional, by-the-numbers master-plot so talky the picture would work well as an ASMR video. I haven't felt this relaxed in weeks--a good thing, unless you've spent 104 minutes trying to frighten me.

Carly talks to her mom inside a PlayStation 2 "Silent Hill" map--but from the game's prologue, not when shit gets hair-raising. There are a few scenes where something scary happens and it turns out to be a dream. That's right, Demonic does that. Although this gambit can work (he said hedging his bets), here it mostly feels like sloppy, cowardly screenwriting that wants to have its "gotcha!" without actually doing something to a main character that would be difficult to undo. The word I'm searching for is "cheap." (Another is "lazy.") The best that can be said for Demonic is that it's roughly travelling the same ground the Nightmare on Elm Street franchise travelled--except once it establishes an elastic environment and maybe a supernatural shark trolling those uncanny waters, it decides to spend most of its time in the "waking" world exploring, in exhausting detail, the most tedious aspects of a premise that is not only not difficult to follow, but extraordinarily familiar, too, to anyone with even a passing interest in horror. I guess that's one of the problems with genre tourists: sure, you can make these movies on the cheap, but you can't substitute a lifetime of respecting them. Demonic is a DTV-ish holdover from the VHS era, a Max Payne for people who've never played it, packed to the brim with vague Freudian/Catholic nonsense and faux-profundity. The good news is, you could always just watch District 9.