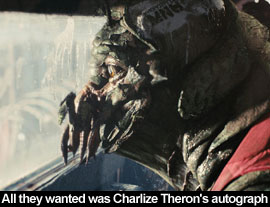 It's a debate germane to the United States, of course, and France in particular, as are other issues of partitioning, torture, police actions, and undeclared wars in warlord-overrun nations. At its heart, District 9, with its evocation of collateral and urban terrorism involving a class transplanted to foreign soil (in this way, it's the perfect companion piece to Tarantino's Nazi-killing opus Inglourious Basterds--and boasts commensurate references to concentration camps to boot), can even be read as a sharp criticism of Israel in the 21st century. What's dangerous about this approach is that District 9, in painting one group of antagonists as superstition-fuelled blacks engaged in arcane rituals and gun-running, could easily be accused of the broad racism it seems to seek to defuse. The picture is an indictment of our attitudes; it's a mistake to think that all its targets are obvious, or that we're free of its satirical scrutiny. It's good to ask whether the murders blamed on the aliens in the film's newsreel prologue were actually perpetrated by the aliens, and whether the attitudes we're encouraged to develop about the aliens and the heroes in those same introductory moments are those which we carry with us out of the theatre. District 9 is wonderfully slippery, the kind of film that punishes you for being quick with a solution to puzzles that have never had solutions.

Nothing about it, in fact, is obvious. Yes, it's easy to trainspot its genre references (look! It's the genetically-coded weaponry of Judge Dredd! And the kick-ass power-loader from Aliens!), but the way that events unfold--from the surprising vulnerability of the alien technology to the abrupt exuberance of its spasms of graphic violence--is ingenious and carefully-plotted. Consider a scene in which our pencil-pushing nebbish hero Wikus (Sharlto Copley) comes home to an unwelcome surprise party and the amount of tension generated by his need to visit the loo. It's a small thing, really, but in that moment is the seed of why District 9 works so well: the film is about human reactions and non-reactions in absurd situations. Consider, too, what Wikus wants the most--and if his desire is much different from that of the alien protagonist (revealing whose name would be spoiling one of the film's funniest jokes). It's an excellent art installation depicting the concept of irony as the defining factor in our attempts to make sense of atrocity. More than just a parable of Apartheid, more than another genre excoriation of Guantanamo, it's a film that examines two relationships--one a marriage, the other between a father and his son--as they're subjected to the caprices of our capacity to do one another harm from behind the aegis of ignorance and intolerance. That it happens to be the best action film of the summer is perhaps the happiest surprise of a picture that deals in giant social issues and still has room for a gun that causes people to explode into gobbets of gore.

Its special effects beautifully functional in the best tradition of the dirty future of Star Wars and Alien, District 9 works because nothing in it feels superfluous. There's no fat on it to trim. Every scene moves the proceedings, every sequence ratchets the tension. The stakes are clear from minute to minute: we understand where antagonists are in relation to each other and, as exemplified by a brilliantly-perverse cock-fighting set-piece in the middle of the film, there's never any confusion in its images or implications. Produced by Peter Jackson, the only recognizable name involved in the entire production, the whole of it reminds of the Cave Troll sequence from his The Fellowship of the Ring for its clarity of ferocious movement--and of Jackson's early splatter films for its efficient use of fantastic dismemberment. And it knows well enough to ground its technical achievements in a modest story about modest desires in the midst of what might be the end of the world. Somehow, by its end, it's managed to paint a startling portrait of not just Soweto, but every slum and refugee camp--and of abuses of power by the technologically superior, and of the dangers in kicking over antpiles without careful consideration of consequences. Better still, it suggests that it's impossible to predict every outcome to any action. District 9 finds time, too, to take fleeting shots at disastrous nepotism ("Great job, Brownie!") and the trespasses of public works in the pursuit of "the greater good." It's a rare and fabulous film, intensely satisfying, pleasantly thought-provoking, and the best thing of its ilk since Juan Carlos Fresnadillo's 28 Weeks Later. District 9 is the real deal. Hallelujah. Originally published: August 14, 2009.