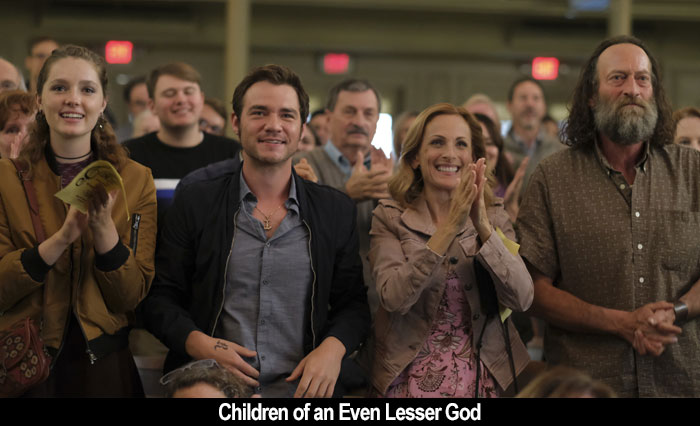 by Walter Chaw It says something, something terrible, that the Deaf community has expressed gratefulness for CODA because it's some kind of representation, while also expressing trepidation because CODA trafficks in harmful stereotypes and centres the hearing perspective. The great Marlee Matlin made news by insisting that deaf actors be cast as the film's deaf family, and that's amazing, huge, a tremendous step in the right direction--and still, the material is so rancid that all of their great work highlights how desperately this community deserves to have material worthy of them. CODA is a grotesque bit of "big performance"/workingman's blues uplift trash in the vein of Mr. Holland's Opus or Dangerous Minds. It has a high-school audition montage, for Christ's sake. (A practicing-for-the-big-recital montage, too.) CODA posits that Deaf people don't like music even though it shows the parents, Jackie (Matlin) and Frank (Troy Kotsur), pulling up to a heavy rap beat, suggesting that the film itself doesn't consider rap to be music, just a noise even Deaf people can appreciate.

Patronizing, condescending, and that's not even the worst of it. In the life of 17-year-old Ruby (Emilia Jones), her deaf parents' inability to function in the world without her as an interpreter is seriously harshing her mellow, man. She says to them at one point that she's been interpreting for them all her life, but that her real joy is singing. (This is the plot of the Planet of the Apes musical from "The Simpsons".) Her parents, Jackie especially, worry that if Ruby pursues her dream of going to music school, she'll fail. They say that Ruby's interest in music is like the seeing child of blind parents becoming interested in art. I think that turns them into plot devices at the expense of their humanity. The details the picture gets right are all related to Ruby's blue-collar family--how she's dressed in old clothes and smells like fish. The mean girls tease Ruby at school, and her crush on dreamy Miles (Ferdia Walsh-Peelo) is more of a burden than a source of joy. I am the child of immigrants who owned souvenir stores. I went to school dressed in tourist T-shirts for the state in which I was born and have lived my entire life. I was immediately on the outside and wore it like the stink of the food my friends found to be repulsive. There's a universal analogue to the story CODA should want to tell, is what I'm saying. It just doesn't want to tell it.

CODA is about, as Jenna Beacom has written, "the terrible burden of deafness and the terrible burden of being born hearing to a deaf family." It's not about me, and Ms. Beacom writes eloquently and in exquisite detail about the pain of being misrepresented. She mentions that Ruby is not played by an actual "CODA" (Child Of Deaf Adult(s)) and that her signing is "non-native." It caused me to think of something like Minari and how it would have felt if they had cast one of the children as a non-native Korean speaker. It also made me think of how, for the longest time, I've felt grateful for any kind of Asian representation in American film, and how it's only recently that I've also asked for those films to represent Asians authentically and respectfully. It's not about equality for me, you know; I don't expect there to be the same number of American films about Asian-Americans as there are about everyone else. But I do hope that when they come, they don't fall back on depicting us as obsessed with "honour" and kung fu-ing the shit out of each other. Again, though, it's not about me. What I can speak of is how this film opens with Etta James's "Something's Got a Hold on Me" and proceeds to use both Marvin Gaye & Tammy Terrell's "You're All I Need to Get By" and Gaye's "Let's Get It On." All three of these songs are the means through which Ruby finds joy and expression. The Isley Brothers' "It's Your Thing" makes an appearance, too. I'm reminded of My Best Friend's Wedding, where the African-American tradition of popular music is, yes, appropriated for emotional shorthand.

That's bad. Also bad is the music instructor, Bernardo Villalobos (Eugenio Derbez), who sees a diamond in the rough in Ruby and brings her out of her shell in time for the big recital--which is a disaster for the parents because they can't hear, you see, and so sign to each other throughout about what they're having for dinner and the like. I feel as if a little bit of the message is that Deaf people are rude and a terrible embarrassment for Ruby: a barrier to her dreams and an almost insurmountable block to a life beyond the insular cloister created by their condition. (I'm avoiding terms like "disability," because I'm trying to be conscientious of the ableism embedded in my language and experience. I fail here more than I fail almost anywhere else in the modern conversation, and I'm ashamed at how hard it is to find words that are not belittling or harmful to huge swaths of human beings.) Two scenes worth singling out: one on a beach where Ruby's brother Leo (Daniel Durant) tells her they don't need her to be a hero for them because they're self-reliant, capable, and strong. Had CODA paid more than lip service to this... The second scene takes place on the flatbed of a truck and sees Frank asking Ruby to sing directly to him. It plays like the disability version of The Green Mile, assuming The Green Mile isn't the disability version of The Green Mile. There's a disturbing prioritization of speaking and hearing versus signing in this picture--the implication being that the Deaf community would like very much to hear in order to experience music the way the hearing community experiences music, rather than how the Deaf community experiences it. Which is deeply. Because people who are deaf are fully people.

During Ruby's audition at Berklee School of Music, she sings Joni Mitchell's "Both Sides Now," which, while culturally appropriate, is painfully on the nose. Noticing her family snuck onto the balcony, she starts signing the song, and then the movie goes into a montage sequence of Ruby getting into college that is pushing it with this lazy, schmaltzy bullshit, you'll agree. I thought more than once during CODA of Myroslav Slaboshpytskiy's brutal, uncompromising The Tribe, a Ukrainian film about the violent comings and goings at a boarding school for Deaf teens that eschews subtitles and spoken words entirely. It's astonishing as an exercise in empathy and active viewership. Curious, I tried CODA with the subtitles turned off, and sure enough, it's immediately better--less of a condescending asshole towards its concept. And, look, it never actually resolves the issues around the family's finances, making all of this an exercise in prioritizing the hearing kid's future at the expense of everybody else's. Kotsur has said that he learned to say the word "go" for the movie, and I have to think the reason they asked him to was very much like the reason Caesar in Rupert Wyatt's Rise of the Planet of the Apes says "go" at the end of that film. Kotsur, Matlin, Durant, and Jones are uniformly good here. Painfully good. Too good for what is the quintessential Sundance movie: offensive, privileged, polished middlebrow dreck. They should just mail it the Golden Globe now.