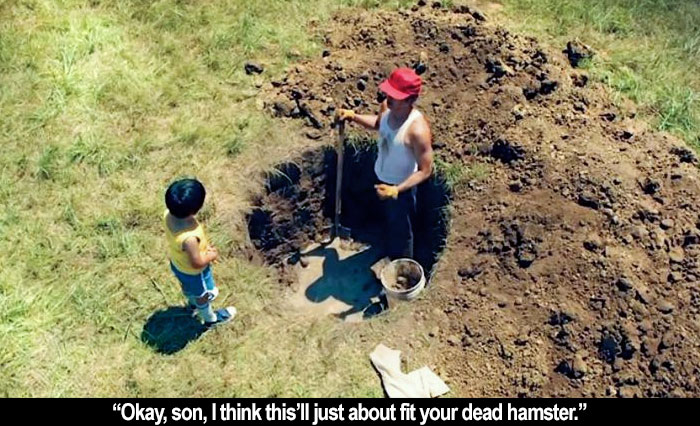 by Walter Chaw I didn't like my grandmother, either--the way she smelled (mothballs, I think)--but I always equated it with Taiwan and foreignness, you know, the parts of myself I was trying to burn away so the kids would accept me at my predominantly white school. If I recall correctly, all the way through high school I was one of maybe two or three Asian students. A great-aunt of mine visited one year. She fantasized about killing the geese at the park and eating them. It made me crazy when she spoke this way. I was mortified, embarrassed to be out with her; I walked apart from my family as if the distance would make people forget I wasn't white. My grandmother would tell me about how stupid Americans were and how different my parents were here, how they didn't used to fight like they do now that worry over money dominated our lives. My dad was a brilliant guy, a grandmaster Go player with a Ph.D. in Geochemistry. Or he would have had one, but he didn't get along with his professors--and, he would tell me, he was very bad at German. (For a while, the only textbooks for what he was studying were written in German.) So he opened stores, learned silversmithing, and created jewelry. And he made a lot of business investments that were mostly failed that served to alienate him from us, strain his marriage, and rush him to the grave when he was 54. That's seven years older than I am now.

Minari gets everything right. Exactly right. Excruciatingly right. Lee Isaac Chung's film about a family of Korean immigrants trying to make a go of starting a small farm in Arkansas is so precise about the details of my life that I wonder if maybe he was me. The first time the family goes to church, the other kids make "chingchong" noises and ask if they're speaking Korean. They want to know why the face of the little boy, David (Alan S. Kim), is so flat. These are questions I've answered. They hurt, sure, but at least people were talking to me. David's dad is Jacob (Stephen Yeun), a chicken sexer by day who has spent all of the family's money on this dream of 50 acres and not a mule but a crop of Korean vegetables he hopes to sell to Asian grocers in the big city. Jacob promises his wife, Monica (Han Ye-Ri), that everything will be okay, but he has no way of knowing. Still, he puts in the hours, and he even hires a guy, Paul (Will Patton), to help out, even though Paul is not entirely right in the head. "You like Jesus, too," Jacob says to Monica when they pass Paul dragging a giant wooden cross down the dirt road. My mother liked to follow, too; she dabbled in churches and religions while my dad stood in mute disapproval. I think about the strange people my dad befriended now as well, and wonder if it wasn't just because they were the ones who would be our friends. One Thanksgiving, we went to one of these friends' cabins--no water, no electricity, pot-bellied stove--and I was given a bowl of venison stew. I didn't want to be strange. My memories of these moments... I wish they were happier. I didn't know. I was in too much pain.

It's strange to watch Minari because my perception of it is split between the child's experience and the experience of the parents. It puts me in a place where I empathize completely with both David's desire to fit in and Jacob's desire to feel successful at something for once in his life. I see clearly how the devastation of the one feeds into the continuing devastation of the other. It's not clear to me how to break out of that cycle. My dad, for a while, bred ornamental goldfish and took them around to pet stores. He covered the floor of our basement with kiddie pools and filled them with stock. My little sister would hold them in her hands while they went through birth to comfort them. She has a couple of doctorates now. She's the smart one; I'm the one with potential. There's a scene late in Minari when Jacob makes a business connection with a grocer who will take their goods to Oklahoma. I remember going into the stores with my dad, trying to get someone to buy the fruits of his latest plan to make everything better for us. I remember when my parents stopped coming to my school things and how I didn't attend my high-school graduation because I was told that everyone graduates from high school and they'd celebrate when I earned a doctorate. I never did.

Monica is stronger than my mom was. She forces Jacob to choose their family over his dreams of a small-business empire. I can see now how my mother lived a life she didn't choose and that maybe those things she turned to for meaning weren't the actions of someone weak, but someone in pain. Minari has helped me contextualize how we all, to some degree or another, live lives we didn't choose. I remember a day my grandmother cut her finger badly on the mouth of a can she was trying to clean up and how angry I was at her frailty. I thought she was stupid. But I was furious that it was my mess, that she was hurt and why couldn't I be a better grandson? I still struggle with feeling like I'm not good enough, like I've made only terrible decisions in my life and don't deserve happiness. But that doesn't make me less estranged from my mother, or my grandmother, who died years ago, or from all the other versions of myself I've made it my life's work to compartmentalize and forget. Minari is the first time I've felt completely known by a film. While there are others that have captured pieces of me, this is the first to put them together in a way I can observe. Maybe it's that I'm 47 now and have the eyes to see. Maybe it's just that good.