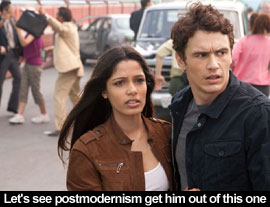 by Walter Chaw Perverse, terrifying, hilarious in exactly the right way; smart enough, emotional enough, and at the end uniquely satisfying in any number of hard-to-quantify ways, Rupert Wyatt's Rise of the Planet of the Apes (hereafter Rise) overcomes even James Franco--here miscast as a human--to produce something of a minor masterpiece. A prequel to the classic series' prequels-as-sequels, it follows the ascendancy of chimp Caesar (Andy Serkis, typecast in motion capture) as he's genetically engineered to be intelligent through an accident of birth, only to grow progressively more so in time with the devolution of adoptive human grandfather Charles (John Lithgow), who's ravaged by the Alzheimer's disease that the drug that makes Caesar smart was meant to cure. So while there's a decided "Flowers for Algernon" effect of the stuff on humans, in ape-kind it just sort of escalates geometrically, thus presenting Rise as kindred in spirit to J.J. Abrams's Star Trek reboot: problem-solving at the same pace it's delivering exceptional character moments and well-timed action sequences. Like Star Trek, too, incidentally, it's a wonderful surprise.

It'd be perfect but for Franco as brilliant (snigger) geneticist Rodman and the introduced, then chronically underdeveloped, love interest, zoo vet Caroline (Frieda Pinto)--the two of them creating no chemistry and serving no purpose but for Caesar to recognize in the interplay between them something that has perhaps been denied him. It's all speculation, as Rodman and Caroline orbit around one another without any definition before falling completely out of memory and interest every second they're not on screen. Lithgow's demented senior fares better, though Rise is mainly interested in the CGI apes and the metaphor they come to represent of a prison community at the mercy of cruel warden Landon (Brian Cox) and his evil jailor son, Dodge (Tom "Draco" Felton). The film's a chimps-behind-bars saga at heart, with Caesar marshalling his troops and plotting a way to get them out. How the filmmakers match that drama with an explanation for how it is that we get from here to Charlton Heston (and background television coverage of the Mars trip that Heston's Taylor blasts off on is one of Rise's best in-jokes) is flat brilliant.

It's the smaller touches that seduce, however, and Rise is bursting with them. A scene where Caesar speaks in sign language to an Orangutan is spooky in a way that Howard Hawks (and his chemist-chimp from Monkey Business) would've appreciated, while a moment where Caesar asks Rodman if Caesar is his "pet," the manner in which a phalanx of beasts arm themselves for battle, and the way that the different species of ape are deployed to their specific strengths in a lovely bit of battlefield tactics all combine to produce something giddily awry. Rise is amuck and lawless in the same way as George Miller's Babe: Pig in the City, in fact, and it similarly creates massive discomfort in giving its animal stars the capacity and pretext for outrage. A racial allegory if you choose to make it one (and what is our erstwhile Malfoy but an Aryan baddie in two franchises now?), a screed against stem-cell research/genetic engineering/the pharmaceutical industry ("You change the world, I make money, that's the deal!"), if you like, really all Rise is at the end is a lovely little science-fiction film, something like 12 Monkeys or this year's Source Code--airtight in its own set of rules, blissfully free of obviously-manipulative moments, and containing a pretty startling performance by a computerized chimp. It's precisely what a summer movie should look and feel like, and there's no requirement to be dumbstruck and gaffed before it to love it. Originally published: August 5, 2011.