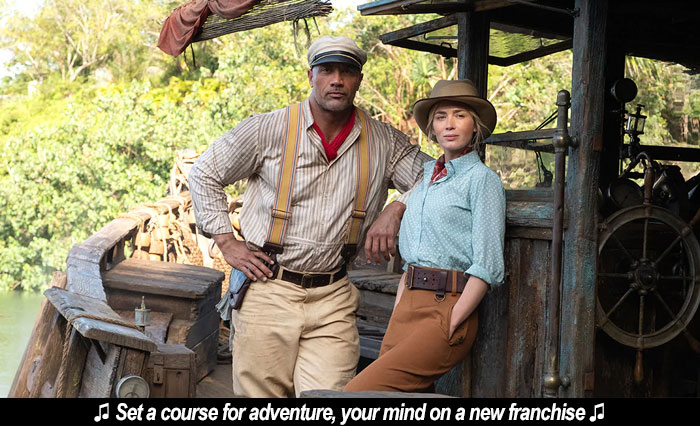 by Walter Chaw For a film based on a theme-park attraction without a point of view or anything to say, Jungle Cruise is as good as it could possibly be, i.e.: fine. It reaps whatever benefits one could from the star power of Dwayne Johnson and Emily Blunt without giving them something to do, and it seems to belong to the Aguirre, The Wrath of God cinematic universe, which is, you know, unexpected. There's a moment somewhere in the middle of it where Blunt's character, Lily, asks Johnson's Frank a personal question and then listens. She's an actor of tremendous empathy and clarity, and although, in these moments after finishing the movie, I can't for the life of me remember what they were talking about, I do recall thinking how nice it would be if Blunt got more roles in which she might play a human being. For now, she's a plucky scientist two years into WWI who is denied admission into stuffy scientific societies because she's not only a woman but a woman who wears pants. What Lily wants to do most is find a mythical tree blossom in the Amazon that bestows eternal life, making Jungle Cruise a part of The Fountain's cinematic universe, too, which is likewise unexpected. The person she hires to help her is Frank, of course, and the bad guy who wants the blossom but for nefarious reasons is German Prince Joachim (Jesse Plemons). Oh, the other bad guy who wants the blossom is Aguirre (Edgar Ramirez), a centuries-old conquistador doomed to jungle purgatory. It doesn't matter.

Nothing matters in Jungle Cruise. There are fisticuffs; there's a CGI pet leopard who's good for some reaction shots and a feline ex machina or two. Lily's little brother MacGregor (Jack Whitehall) makes some waves as the most explicitly gay character in the Disney cinematic universe. It's a good scene, the "coming out" one: MacGregor tells Frank he declined an opportunity to marry a woman because his interests lie "elsewhere." Frank raises his chiselled eyebrows, repeats the euphemism, then toasts to it. MacGregor says that he's so devoted to Lily because she stood by him when their entire social circle shunned him. There are complaints from the LBGTQ community about this being another tease from a company notorious for it. Since I'm not a member of that community, I can only bow to their perspective. But later, when MacGregor makes an obvious entendre offering to do naughty things to Frank (who's been impaled by a sword), I mean, I guess I didn't think Jungle Cruise was being particularly coy about MacGregor's sexual orientation. Also: his skincare regimen feels like a Golden-Age-of-Hollywood dead giveaway. The short of it is that the performances are terrific, and there's a sequence with the same kind of monkeys that show up at the end Aguirre, The Wrath of God, so either there are actual Easter Eggs for a Herzog movie in this or it's so rote I'm hallucinating. Either way, pretty cool.

Did I mention the fisticuffs? There are also CGI monsters, with the reanimated conquistadors of Aguirre's party each having taken on a specific characteristic of the jungle that has cursed them. (I liked the one made out of bees and honey the best.) There's even a flashback to how they got this way in which they act very much like conquistadors, which debatably takes some of the sting out of how Jungle Cruise tries to have its cake and eat it, too, with regards to its portrayal of Native Amazonians. Very broadly, the film seeks to be empowering and inoffensive in equal measure. It wants to be feminist by presenting a smart, able woman of whom men are afraid, but without any women among its key creative personnel, it's just sort of patronizingly stock. It wants to be gay, but due to the constraints of Disney house culture: same. It's not so much queer-baiting as "progressive-baiting," the corporate navigation strategy of skimming along the bare minimum, like Iron Man 3's solution to the problem of The Mandarin: The picture knows where the landmines are buried but goes around them instead of disarming them. Lily is a brilliant anthropologist, Frank exploits the racism of others without being racist himself, and MacGregor is gay but a good boxer. There's a romance and a tragic backstory, all to make Lily a traditional girl character so that we forgive the poor, lovestruck lass when she does something extraordinarily selfish for the sake of her newfound love, and then we're also meant to forgive it when Jungle Cruise hedges its bets and bails her out for it. Plemons is fun with his German accent, Ramirez is dashing, and... And it's all just crossing things off now. That's fine; these movies are to-do lists, anyway.