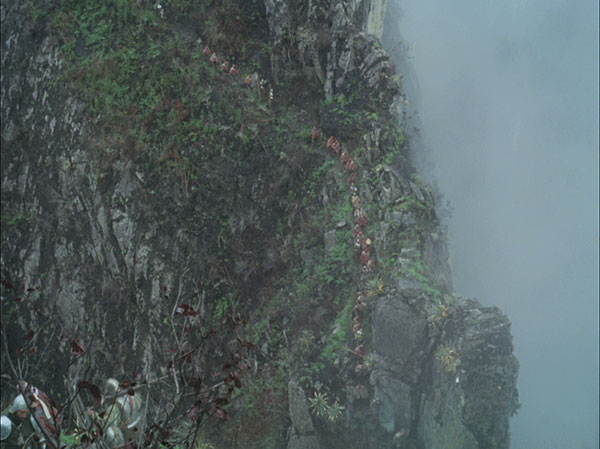 by Walter Chaw A work of holy madness about acts of holy madness, Aguirre, The Wrath of God is a transcendent, haunting film that defies description and captures, somehow, what it means to be human in all the venal, small, sometimes grand things that being human implies. Once seen, it's never forgotten, and upon repeat viewings, it's one of those pictures that makes you want to cry for no particular reason but that it is, in almost every non-quantifiable way, perfect, a film alight with invention, love, and passion--a memoir of the worm in the gut that demands blood and glory. Aguirre (Klaus Kinski) is an under-lieutenant in the bona fide Peruvian expedition of Gonzalo Pizarro (Alejandro Repullés) to find the lost city of gold, El Dorado, a fiction of the Peruvian Indians meant as a suicide pill for their conquistadors. Once the expedition bogs down in the mud of the rainy season, Pizarro sends nobleman Don Pedro de Ursua (Ruy Guerra) off with Aguirre on a satellite mission to scout a path ahead for the main body. Though neither party was ever heard from again, Aguirre, The Wrath of God proposes to tell the final days of Ursua's doomed men.

Kinski's Aguirre is an animal--the actor's intent was to move like a crab or an insect, some combination of Iago, Caliban, and Richard III as he looks Pizarro up and down with cold, bestial calculation before declaring to his commander that the river they want to follow will swallow them whole. He stages a coup, decides that his group is no longer subject to the Kingdom of Spain, and as their dwindling numbers drift down the endless river towards a fictional prize, death, invisible and silent, rains down on them from the mystical jungle. Scored by legendary ambient "Krautrock" band Popol Vuh (naming themselves after the Mayan creation myth, snatches of which are read as narration in Herzog's Fata Morgana), the mood of the piece is overwhelmingly, oppressively melancholy and weighted down with something like spiritual dread. When Aguirre declares himself "The Wrath of God," it speaks to the arrogance of man in trying to contain what's uncontainable--Wallace Stevens's "The Idea of Order at Key West" encapsulated in a film of impossible beauty (shot on a $360,000 budget with an eight-man crew) and ambition. Kinski's performance is already legendary, as are the tales of his run-ins with Herzog and various extras. It's a testament to the genius of Aguirre, The Wrath of God that its genesis has spawned its own creation mythology.

THE DVD
Anchor Bay wins my heart for the umpteenth time with a gorgeous DVD rendering of Aguirre, The Wrath of God, available individually or as part of their indispensable Herzog/Kinski box set. Maintaining its original Academy ratio of approximately 1.33:1, the film is presented in virtually flawless condition--and for a print with this sort of origin and of this age to look as clean as it does feels like a gift from eternity. A Dolby Digital 5.1 remix of the German audio makes full use of the ambient channels in reproducing the sublime score, though there is little separation otherwise. (Avoid the DD 2.0 mono English dub at all costs.) Most of the information is kept to the front channels, but it's fulsome and free of the flintiness common to digitally-tweaked analog soundtracks. A film-length commentary--again featuring Herzog, Norman Hill, and Crispin Glover--is full of interesting anecdotes and occasionally hilarious understatement, my personal favourite coming when Herzog is asked how, at the tender age of 28, he managed to do something like this. With a laugh and no further elaboration, he replies: "I had a clear perspective and was fortified with enough philosophy." Two talent biographies, one for Herzog and one for Kinski, have that usual Anchor Bay completeness and flair, although neither is credited to a specific author. The three trailers that round out the presentation resolve themselves to be one and the same: the first with English-subtitled German narration, the second with untranslated narration, and the third with English-dubbed narration. Originally published: April 20, 2005.

THE BLU-RAY DISC
by Bill Chambers From its famously vertical opening shot, Aguirre: Wrath of God looks outstanding on Blu-ray. The 1.33:1, 1080p transfer has a more polychromatic palette than one is used to, getting the most mileage out of costumes that are heavy on the Easter colours and scenery that is occasionally dense with foliage. Anchor Bay's DVD looked clean but nowhere near this impeccably filmic, with a generally fine grain structure that spikes depending on the dimness of the natural-lighting conditions. (I wouldn't want it any other way.) Contrast, too, takes a hit when the image wants for exposure, and the telecine operators thankfully haven't gone out of their way to digitally level it out. The only peccadillo is a bizarre artifact that intrudes sporadically starting at around the 86-minute mark, wherein the grain seems to localize itself on, and desaturate areas of, bright colour--such as Aguirre's purple shirt--while also becoming particularly noisy and electronic. Oh, and there's a hair in the gate from 20:33 to 21:00, but I found it charming.

Both the 5.1 and 2.0 mono German mixes and the English 2.0 mono mix get bumped up to lossless in DTS-HD MA. I was impressed by the impact of the various explosions in 5.1 but ultimately opted for the German 2.0 track for its superior dynamic range. The Norman Hill-moderated commentary with Herzog and actor/fan Crispin Glover returns, joining a breathless German-language/English-subtitled yakker Herzog recorded with distributor Lauren Straub, who acts as interviewer. They manage to find new avenues into familiar topics, with Herzog dispensing historical data fairly regularly. He calls the Pizarros "illiterate swineherds," which is a world-class insult, though he's actually being literal--that's why Alejandro Repullés uses a stencil to sign his name in the film. He also talks a bit about his collaborations with Popol Vuh and of course Klaus Kinski, whose on-set tantrums are duly tabulated.