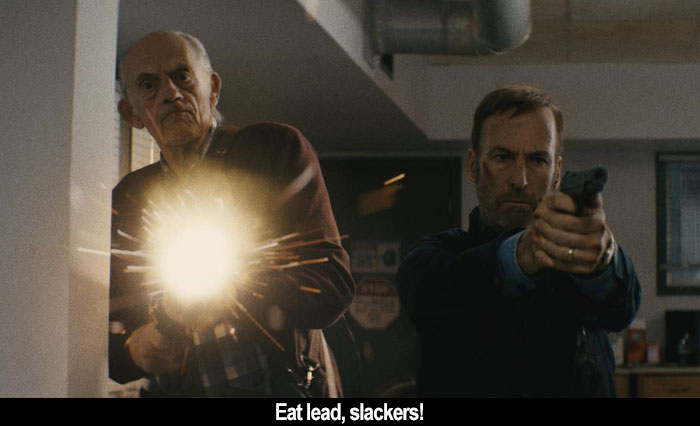 by Walter Chaw I spent a lot of my freshman year in college in the shadow of post-trauma from a failed suicide attempt, untreated depression, and what felt like hardwired self-loathing. I looked for fights then and found them sometimes. I am so full of rage and frustration. I am beset by violent fantasies. When I watch videos of people turning the tables on attackers or racists, I wonder if, in the same situation, with the same upper hand, I would be able to stop hitting once I started. Age has mellowed me; my wife and my family have civilized me to some extent, and I don't punch walls anymore, you know? It's just sadness and self-loathing left in the debris, should anyone think to sift through it. I don't think I'm unusual. I think men aren't given the mechanism to express their despair in any way other than through violence and rage, and therein lies the reason everything is broken now and why we're largely beyond repair. We are the pure residue of a vile evolutionary animal. Everything that doesn't make sense makes perfect sense when you consider that we're just shaved apes barely behaving ourselves.

Early on in Ilya Naishuller's Nobody, everyman Hutch (Bob Odenkirk) is so angry about a stupid situation that he punches a brick wall compulsively in a fit of cathartic self-destruction. He's an ex-FBI "auditor"--meaning, he says, that he was the last person anyone wanted to see. Now, he's settled into middle-class domesticity: An accountant for a small manufacturing business owned by his father- and brother-in-law, he dreams mainly of being able to buy the company and finally remember to take the trash out on Tuesday. The stultifying repetition of Hutch's day-to-day sets Nobody up to be a Falling Down story of an ordinary guy cracking, though it's closer to Liam Neeson's geezer-teasers and, of course, the new gold standard for Death Wish vehicles like this, John Wick. (Both films were written by Derek Kolstad.) You could probably write an essay about how modern bad guys, here led by psychopath boss Yulian (Aleksey Serebryakov), seem to frequently be Russians again, just like they were in the bad ol' days of Reagan-era red-baiting, but I dunno; if Putin is on trial in American action cinema, at least he's on trial somewhere. More pertinent is how Nobody equates graphic, unstemmed blood-letting with an almost sexual charge for men--an accurate illustration of what happens when the only way you can acceptably release all of your pain is by inflicting it on others and oneself. Pain is what we have. It is our birthright and our only promised reward.

Hutch beats up some drunks on a bus who happen to be related to the Russian mob, leading to a great deal of violence. Hutch likes to tell people that he's "nobody," which is the same tactic Odysseus used on Polyphemus and is also the running gag of the early-'80s country crossover "Nobody" by one-hit-wonder Sylvia. That one goes: "Your 'nobody' called today/she hung up when I asked her name/now I wonder, does she think she's being clever?" I don't know that Nobody thinks it's being clever so much as it's intentionally or unintentionally making the case that Hutch is indeed a catch-all representative of male frustration and, by extension, male toxicity. Hutch's mid-life crisis isn't a mistress and a hot rod--it's a trail of corpses. And a hotrod. Slotted into dull routine, the film says, any man is just a powder keg. So the way we suture into Nobody is by empathizing with the universal desire to murder a lot of people. We have a "murdering other people" epidemic in the United States because guns are too easy to get and everyone goes a little crazy sometimes due to work pressures, domestic pressures, and the continued degradation of a 99% working class. We are all powderkegs. Everything is a fuse. If the Chauvin trial had gone the wrong way, how many American cities would be on fire right now?

Nobody has solid action and a very able central performance by Odenkirk, who, between his work here and as "Saul" on both "Breaking Bad" and "Better Call Saul", has established himself as the avatar for the modern man. He's not Cary Grant but Ralph Bellamy, and if he can snap, who couldn't? That's the difference between Nobody and stuff like Death Wish and John Wick: this isn't a vengeance/vigilante movie, it's a free-floating grievance movie. Its premise is that the ordinary grind is so humiliating to manhood that of course it will lead to these kinds of deadly explosions. Without saying that Nobody is wrong, I will say that ignoring this film as an invitation for introspection is a mistake. What is it about the million little soul-crushing tasks we must perform to pay the bills that makes this less a ridiculous, even vile, fantasy than an almost erotically-charged aspiration? Nobody pushes the lie of entrepreneurship, too, en route to its glorification of masculine repression and what seems the inevitable, and inevitably violent, explosions such repression engenders. The line between civilization and riot is thin and getting thinner. Nobody is more a celebratory wallow than a warning. Sex is great, but have you ever thought about murder without consequences? Come on in, the water's fine.