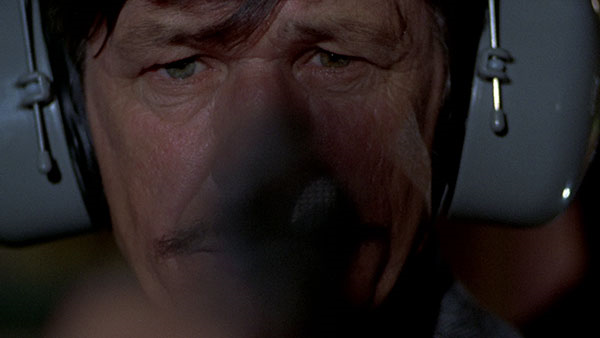 by Jefferson Robbins The urban vigilante is one of cinema's most potent, enduring figures, and it's worth asking how he got there. Michael Winner's influential but derided Death Wish drafts an explicit genealogy for its cosmopolitan avenger, granting him claim to the mantle of the lone lawman of the Old West. Bereaved through violence, Manhattan architect Paul Kersey (Charles Bronson) takes an assignment revising a valuable development plan near Tucson. There he pauses to watch a cowboy shootout re-enacted for tourists, the bad guys toppling until the besieged sheriff is the sole, righteous survivor. It's a cheap, thrilling, thoroughly Hollywood portrayal of frontier justice, and it represents an ethos Paul's host Jainchill (Stuart Margolin) urges him to carry in his heart back to New York, where unlicensed firearm possession has been illegal since 1911. This tension isn't original to Wendell Mayes's relatively terse screenplay--it originates in Brian Garfield's 1972 source novel, published after the author spent a decade cranking out pulp western yarns. But Death Wish uses this element to make its own statement, grafting the mediated concept of frontier self-justification onto an urban morality play. The western may be dead, and it may have been a lie to begin with (and it may be the cinema of the '70s that killed it), but Death Wish is among the genre's inheritors. Don't all children eventually hope to supersede their parents?

Paul arrives at a building plan that both satisfies Jainchill's New York investors and helps preserve his beloved desert scenery--again, maintaining a simulacrum of the romantic West within a modern enclave. In thanks, when Paul returns to the Upper West Side apartment, where his wife was bludgeoned to death and his adult daughter raped, he receives from Jainchill a surprise gift: a nickel-plated .32 Colt revolver. Suddenly Paul--a conscientious objector in the Korean War, a man painted by his cynical co-workers as a "bleeding heart liberal," a natural marksman who hasn't fired a gun since a distant childhood trauma--has a lot more to think over. "If we're not pioneers, what have we become?" he asks his milquetoast son-in-law Jack (Steven Keats). "What do you call people who, when they're faced with a condition of fear, do nothing about it--they just run and hide?" "Civilized?" is Jack's tentative response. Bronson was already familiar with this dynamic, of course. An underappreciated heavy in twenty years of Hollywood westerns, his incredible breakthrough in an incredible milepost of the genre arrived with the western's last breath--as Harmonica, likewise a stoic avenger, in Sergio Leone's Once Upon a Time in the West. His presence alone here is an ironic commentary, while also yoking Death Wish to an earlier, revered breed of gunslinger.

Death Wish culminated an astonishing flurry of collaboration between Bronson and Winner. The director first deployed the star in one of his last ethnically ambiguous western roles with Chato's Land in 1972, then imported him to the modern urban frontier with 1972's The Mechanic and 1973's The Stone Killer. Apart from cleverly loosing his apex predator into a new environment, Winner proves his mettle elsewhere in the frame. Paul and his doomed wife Joanna (Hope Lange) flinch at the NYC traffic noise as they return from a Hawaiian vacation--a reluctant descent from Paradise back into this fallen world. A flock of four nuns signals impending violence or heartbreak wherever they walk, first heralding the trio of thugs who break into Paul and Joanna's apartment, then scattering gloom at the wintry sanatorium where daughter Carol (Kathleen Toby) is sent to recover. The attack on Paul's family is difficult to watch, even after forty years of much more brutal cinema, and the oral rape of Carol (by an uncredited Jeff Goldblum, in an inexplicable Jughead cap) leaves her, significantly, mute.

Death Wish leaves some details messy, making for a more fulfilling picture. Paul does a slow burn to fulfill his vigilante destiny; he doesn't take it on lightly. Once past the nauseous guilt of his first killing, though, he's a new man. His lightheartedness feels akin to the vitality that settles over some emotionally aggrieved people just before suicide: they've found a "solution" to their problems, and embrace it. (This is where the title--a loaded phrase in itself--finally comes to apply to the protagonist.) It's almost never certain whether Kersey is inserting himself into situations to get attacked or reacting to random violence with violence, although the number of criminals he shoots in the back while fleeing, or executes while they lie wounded, makes his ultimate intentions clear. Police Inspector Frank Ochoa (Vincent Gardenia) is a kind of mirror to Paul: a very effective cop who doesn't let little things like unlawful search and seizure slow him down in the hunt for the gunman who's ventilating known muggers and addicts. More, it becomes clear such cavalier corruption goes straight to the top when Ochoa presents his inadmissible evidence to his superiors. And those three giggling psychos who stole Paul's loved ones from him? They're never seen again. A lesser or later film (or, most likely, its remake) would have Paul tracking down and destroying them in a third-act boss fight that teaches him something about himself. Their disappearance leaves an atmosphere of unrelenting threat--the notion of violent crime as a sourceless evil, for which Paul Kersey must be ever vigilant, and heavily armed.

For all the good it did. Almost 1,700 people were murdered in New York City the year Death Wish came out, and the rate didn't start to drop until halfway through the Clinton administration. In fact, it got worse: By the time Brian Bosworth washed out of play as an NFL linebacker and confessed steroid user in 1989, the national violent crime rate had gone up 50 percent from Bronson's exploitation heyday. All those Paul Kerseys and Travis Bickles hadn't saved us, nor had the remorseless rogue cops like Harry Callahan and Martin Riggs--that is to say, cops with vigilante attitudes. Still, these law enforcers who'd been pushed too far at least offered a soupçon of cover for our worst impulses, ensuring their commercial success throughout the '80s. They were our anointed protectors, after all, so if the proletariat agreed with their methods, how could those methods be wrong?

Bosworth's star vehicle Stone Cold is less a film than a construct in which veteran screenwriter Walter Doniger, in his seventies the year it was released, puts audience-tested Lethal Weapon concepts through a blender. The blender is literal: Stone Cold bestows a passel of tics on Bosworth's Joe Huff by having him whip up a breakfast shake of OJ, Snickers bars, raw eggs, potato chips, and Tabasco and then (I think) feed it to his pet monitor lizard. A Gulf Coast cop on suspension for mutter mutter something something who cares--he's on the edge, man. Huff first puts down some Central Casting hoods in a grocery store hold-up, then gets recruited by the FBI to infiltrate a biker gang under what appears to be the leakiest false identity ever crafted for a federal sting operation. "You wanna fuck with the living, you gotta learn to fuck with the dead," is among the more cogent badassisms muttered by the all-white, apparently all-male Brotherhood's leader, Chains (Lance Henriksen, slumming but never slipping). His gang/cult is cognitive dissonance on Harleys, embracing Nazi and Confederate iconography and fêting its dead with Viking funerals, without ever committing an act or uttering a word that could be viewed as intrinsically racist. 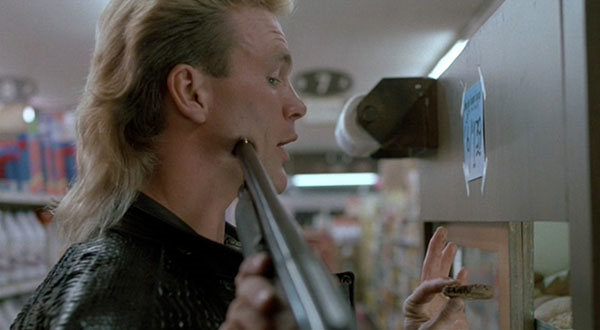 They couldn't have a more agreeable foe in Huff, a.k.a. "John Stone," who proves absolutely awful at preventing every domestic terrorism scheme he was deployed to foil. The vile sexism of Stone Cold, like the left-field idiosyncrasies of its protagonist, is another '80s hangover, an iteration of the strip-club scene from Beverly Hills Cop turned up to eleven. Chains's main squeeze, Nancy (Arabella Holzbog), is the only woman with a speaking part, and she gets belittled, passed around, pushed around, joylessly smooched, and, finally, executed. Dated even as it arrived by Bosworth's feathered two-tone mullet and composer Sylvester Levay's scorching soft-metal guitar, Stone Cold tries to bed down among superior action films by cribbing the end of Die Hard wholesale. That's not to say its ridiculous action scenarios aren't worth watching: Director Craig R. Baxley helms this with as much blow-'em-up competence as he did 1988's Action Jackson, albeit with less heart. Bosworth, despite having the pigeon walk of a man with no cartilage left in his knees, succeeds as a monolithic blank slate. He's impassive enough, resolute enough, concerned-looking enough to be a reasonable audience surrogate in this affair. Yet the film is a lesser echo of its forebears, coming too late with a tin ear for the times. Where Paul Kersey may arguably have prevented future crimes by rooting out their perpetrators, Joe Huff fails to protect basically the entire Mississippi judicial system from a hail of lead. For both men, the law proves symbolically vulnerable and perishable, justifying more violence in its name. 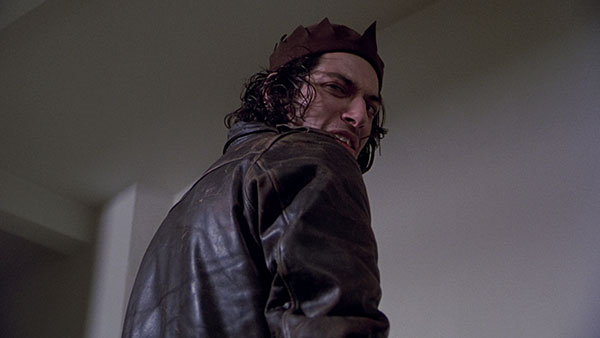 THE BLU-RAY DISC - DEATH WISH
If Michael Winner served up exploitation, he did so with the help of pros. Cinematographer Arthur Ornitz (Charly, Serpico) lensed Death Wish well, whether in the travelogue Hawaii and Tucson scenes or in the grimness of Kersey confronting the city by night. The 1.78:1, 1080p Blu-ray issued by Warners commemorating the film's 40th anniversary retains the Paramount logo and pays due respect to all the environments and moods evoked by Ornitz's lighting. When Bronson turns to stand forth with the night at his back, the blacks behind him remain textured and free of crush. (These shots are as iconic as any broad-daylight western, in their way.) In its moderate but not unsightly grain and the muted daylight interiors, Death Wish looks like itself, if that makes sense--looks like it's an artifact of its period without seeming decayed. Winner late in his career said, "If you want art, don't mess about with movies. Buy a Picasso."

With that in mind I get a kick out of seeing Picasso's "Don Quixote" sketch on Kersey's apartment wall, visible here thanks to the widescreen ratio. It speaks to our antihero's quest/dilemma; also, my parents had the same print when I was young. Soundwise, Herbie Hancock's score is just a little too forefronted for my taste in the 2.0 DTS-HD Master Audio track. It's a masterful but exceptionally busy score, seldom letting the picture just be; too much of a good thing. Still, the mono mix as reproduced here lets dialogue, foley (like the many, many gunshots that punctuate the film's second half), and atmospherics breathe a bit--again, it sounds true to the experience of Death Wish as it must have been on release. For an anniversary edition, this is truly a no-frills platter, with only the original two-and-a-half minute theatrical trailer on board as an extra. Why don't trailers ever seem to get restored with the same care as the movies they advertise?

THE DVD - STONE COLD
Stone Cold's double-sided, single-layer DVD from MGM dates to 2007 and has yet to be superseded by a subsequent release. Though the edge enhancement can be a fearsome beast, image quality is adequate. Sound is DD 2.0 but stereo, putting it slightly ahead of the Death Wish audio but with nothing interesting to listen to. The disc's sole supplement is the movie again in 1.33:1 on the opposite side of the flipper. There, you'll discover the fullscreen and 1.85:1 anamorphic widescreen presentations are essentially the same picture, given different borders. Follow Jefferson Robbins on Twitter 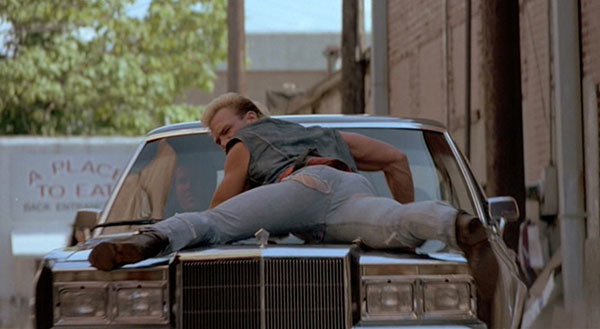