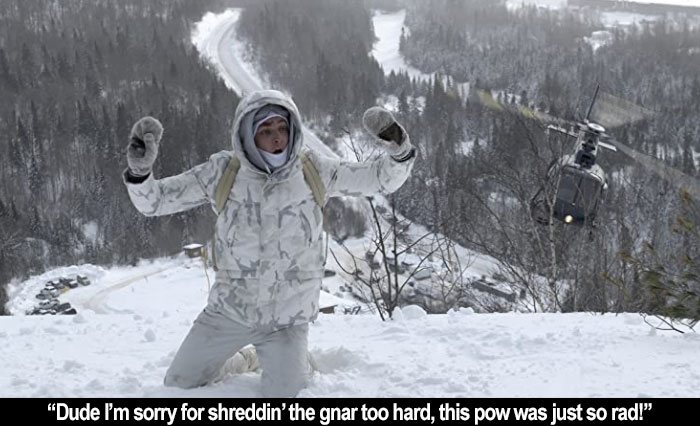 by Walter Chaw Nicholas Jarecki's Crisis is a Stanley Kramer piece, a "means well," ripped-from-the-headlines message flick that hews closer to 3 Needles than to Traffic in terms of effectiveness and humility. In place of dialogue, there is exposition; and in place of performances, there are swollen forehead veins and trembling lower lips, aghast at the injustices of a cold universe. Crisis sheds "importance" from itself like dander from a stressed but beloved pet, and it's unseemly to come down too hard on it when its greatest crimes are that it is middlebrow in its politeness and really doesn't have much to say beyond what's already inherently obvious. It's possible to do stuff like this and make something like The Insider--that is, something powerful, artful, and transformative. More commonly, it turns out like Crisis has turned out: instantly forgettable and mildly embarrassing in the way of your hip dad trying to jam with you about the evils of the sticky icky. Oh, and use a condom, son.

The three storylines here blow the lid off the opioid crisis. The first is the deep-cover agent Jake (Armie Hammer), embedded with Eurotrash baddies looking to sell fetanyl and oxycodone to raver kids. The next is grieving mom Claire (Evangeline Lilly), looking for answers when her son turns up with a minor case of being dead from taking too many opioids. Lastly, there's good Dr. Tyrone Brower (Gary Oldman), who runs a University research lab funded by Big Pharma and discovers over the corpses of a lot of junkie mice that the Next Big Thing in opioids is actually going to kill many more people. Watch as Dr. Brower--whose name does not, somehow, inspire a single joke about its proximity to "Tyrone Power"--blows the whistle, only to discover that absolutely everyone is in the pocket of Big Pharma; Agent Kelly discovers that it's all French Connection, Jake, and no matter how many people he busts, he'll never reach the top of the supply chain; and Claire manages to do as good a job figuring out who the bad guys are as the entire intelligence community by following one person and jail-breaking her dead son's phone. It doesn't matter that it's ridiculous when the topic is so important. I mean, how can you even joke? Do you know how many people are dead?

A lot. A lot of people are dead because the medical system in the United States is a marketplace more interested in profit than in patients. That's a fact. Pharma can arbitrarily raise the price on essential medications and Congress is not only not allowed to bargain--it's not even allowed to ask questions. It's true. Though Pharma pays out millions every year in settlements, its profits are into the billions, so it doesn't actually give a shit. And not only do the commercials it produces create new diseases that can only be treated, never cured, they have also managed to convince people exhibiting no signs of illness that they may be suffering from a symptomless disease. Did you know that Big Pharma suppresses vaccines because they prevent diseases and therefore can't be monetized for endless profit? Did you know there are at least five drug-company lobbyists for every single congressperson in Washington? Did you know that they control Universities and the press covering them and the hospitals and doctors dispensing their product, meaning they reign supreme over every aspect of the supply chain and marketing? The only thing they don't control is the undertaking business--which is booming, thanks.

All of this is both reason enough to make a film like Crisis and explanation for why a cast like this assembled to tell this story. A pity, then, that Crisis is an overwritten, over-obvious dud, clumsy for its earnestness and exhausting for the number of times it swings at the big moment and misses entirely. These aren't characters, they're types--and they don't speak to each other, they speak at us. There is no tension here, because we know that we've already lost; the farther we get from All the President's Men, the more remarkable that film seems. What's most frustrating is that the opioid crisis is real: Heath Ledger is dead, Prince is dead, Princess Leia is dead; if a terrorist had killed them, we'd already be bombing the wrong Muslim-majority country into the stone age for the love of just one of them. But because it's capitalism killing us, the only resistance we put up is this handsome wet noodle. Take that, Merck! Eat limp broccoli, Johnson & Johnson! Frankly, when Jake cradles his dead partner in his arms and screams into the heavens, I don't know how Pfizer can look at itself in the mirror. Crisis will do to Big Pharma what Concussion did to the NFL: nothing. Disappointed? Me, too--but there's a pill for that.