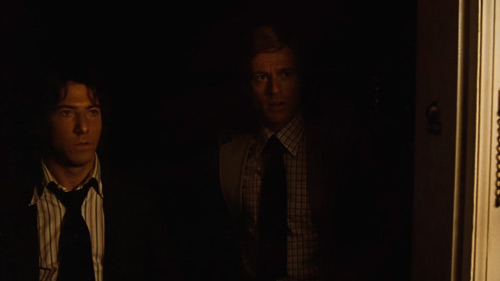 by Walter Chaw The final film in director Alan J. Pakula's loose "paranoia trilogy," All the President's Men does the impossible by making heroes of newspaper reporters and a thriller out of telephone calls and follow-up interviews. Based on Bob Woodward and Carl Bernstein's exposé of the Watergate Scandal and President Richard Nixon's involvement in felonious dirty tricks, it's more than just a cunningly-crafted docudrama--it's a key film in the best era of the medium's history. It's a picture that highlights the period's mistrust in our leadership while establishing highly unconventional heroes for whom the stakes couldn't possibly be higher. And though we know how it all works out, it seems more poignant for our knowing how everything works out.

Impeaching a sitting President didn't save any lives in Vietnam, didn't prevent other Vietnams; it didn't cure rampant corruption in government, didn't stop the impeachment of another President, didn't shame anyone into respecting the Oval Office, and now newspapers are almost dead. Everything is worse. The film isn't the story of a success, it's the story of absolute, systemic failure and the promise not that it's going to happen again, but that Watergate didn't present much of a speedbump on our road to virulent partisanship and a perpetual state of ideological warfare. All the President's Men is about men trying to avert the end of days. Even as they champion their nobility and ideals, there is the sense, unmistakable, that the atrocity is that such things can happen at all. It's The Exorcist, really. No one wins.

Woodward (Robert Redford) and Bernstein (Dustin Hoffman) are grunt writers for the WASHINGTON POST under the tutelage of editor Ben Bradlee (Jason Robards). Pakula takes great pains to reproduce exactly the POST's operation from set-up all the way down to transplanting actual trash from the newsroom to the set. He understands that for this All the President's Men to work, it must feel like a movie about work--in much the same way Jaws did the year before and Star Wars will a year later. In fact, taken another way, the New American Cinema could be discussed in terms of its veneration of mendacity. The westerns were dirty, the sci-fi was dirty, the horror was really dirty, and the dramas, from The French Connection to The Godfather to Fat City to Cockfighter, were about people in miserable professions using the tools of their trade to discover, too late, that they weren't the masters of their destiny. Look at the detective movies from this period (Chinatown, Night Moves, The Parallax View, Electra Glide in Blue, The Conversation, Klute), of which All the President's Men is one: Nobody knows anything and, after further investigation, they know even less. All the President's Men isn't an exception to the rule, isn't a strange anomaly among the decade's masterpieces, so much as it approaches its nihilism from a more societal gestalt. The universe in which it exists is post-apocalyptic; Woodward and Bernstein haven't discovered anything we didn't already suspect. The secret to All the President's Men's enduring power isn't that we're surprised Nixon was a rat--it's that we recognize these victories as Pyrrhic, because everything is a lie.

The film follows Woodward and Bernstein as they're given a shit assignment to cover a break-in at Democratic headquarters in the Watergate hotel and gradually unearth a larger conspiracy intended to cover it up. There's an undeniable thrill as they, step-by-step, track the conspiracy back to the White House; undeniable tension as it becomes clear through whispers and backward glances that their lives might be at stake and that the bad guys, no fantasy this time, are the people we've elected to the highest offices in our land. An offense, an abomination, carried by one of William Goldman's two truly great screenplays and extraordinary performances by, without exception, every single actor in the piece.

Consider a scene where our heroes interview a very nervous bookkeeper (Jane Alexander) in her living room, and how Pakula takes his time with the way they look at each other--how objects begin to loom like Hitchcockian teacups. Consider another scene, later, when Woodward tries to get a non-denial confirmation of a fact in their story shot entirely as a tight close-up of Woodward on the phone, a couple of cutaways to his pencil scratching his pad. It's a moment, and there are others, that proves Redford can act, though he's not asked to (or chooses not to) much. Hoffman, all nervous energy--call it a dry run for his turn in Marathon Man (Goldman's other great screenplay; don't let anyone tell you otherwise)--cements himself as the more typical '70s protagonist. It's the decade of the swarthy little guy, after all, and if you happen to be Warren Beatty instead of Al Pacino, you have to eat a shotgun or be a hairdresser. All the President's Men is essential, exhilarating, and the kind of total downer you only realize is a downer when you can't shake it for weeks. The world is beyond saving, it says. It's one of the last great films of its era that has anyone who thinks it deserves saving. 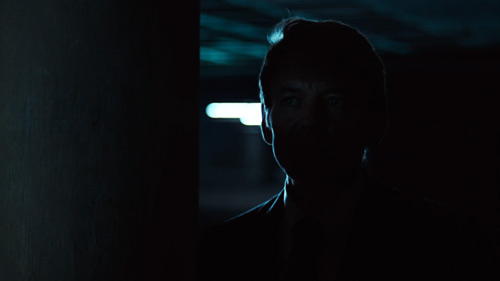 THE BLU-RAY DISC
Warner's DigiBook Blu-ray release presents All the President's Men in a lovely 1.78:1, 1080p transfer on a dual-layer disc. There's exquisitely natural detail throughout, and though the palette looks quite yellowed, more like the Seventies of memory than of reality, I'm not convinced it's outside the intent of Pakula or his DP, the great Gordon Willis. Blacks are dense but generally refrain from crushing, even in the Deep Throat underground-parking encounters, which lack shadow detail by design. It all looks authentic, is what I'm saying. The attendant 2.0 DTS-HD MA mono track is clear and loud and everything you could hope for, delivering its payload of overlapping dialogue with absolute fidelity. It occurs to me that All the President's Men, in its cadence and its rapport between the two leads, is very much in the screwball tradition--imagine what Howard Hawks would have done with this. I appreciate, too, that David Shire's score (the composer of my favourite '70s score (for The Conversation, natch)) sounds nice and full.

Redford delivers a thoughtful audio commentary to start off the special features, filling in gaps throughout and updating information, including the identity, now revealed, of Mark Felt as Deep Throat. He speaks kindly of Hoffman's myriad neuroses, particularly at this moment in his career, and as he dissects the peculiarities and difficulties of working with Woodward and Bernstein, he sort of covertly confirms the Method difficulties the rest of the cast had working with Hoffman and Redford. Redford--a director himself, of course--even offers insight into Willis's process, which, in the end, might be the most invaluable aspect of this yakker. Originally compiled for the 2006 DVD, a batch of standard-def featurettes begins with the retrospective making-of "Telling the Truth about Lies" (30 mins.). I love Goldman's protestations of purity, identifying the guy as a better salesman of his personal mythology than anything else. And there's Willis again. If only Pakula hadn't met so ignoble and sudden an end on the L.I.E.--his loss is deeply felt here.

"Woodward and Bernstein: Lighting the Fire" (18 mins.) is a nice conversation about the state of journalism then and now but, sadly, already due for update. "Out of the Shadows: The Man Who Was Deep Throat" (16 mins.) delves into why Felt did what he did, with the omnipresent and endlessly self-promoting Woodward getting all romantic up in there. "Pressure and the Press" (10 mins.) is a vintage behind-the-scenes piece that, despite its vestigial quality, is the type of thing I like to watch anyway, if only for the narration. A Dinah Shore interview with Robards (7 mins.) is hard-to-watch effluvium that nonetheless tickled a faint memory of this show deep in my storage database, while a fun old trailer (2 mins.) rounds out the electronic media. The DigiBook is 35 stiff pages of production photos, Watergate timelines, and bios for the main players. I looked, in vain, for an author credit. 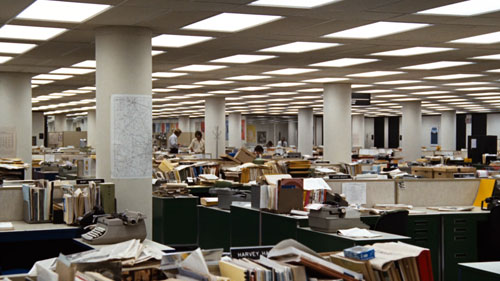