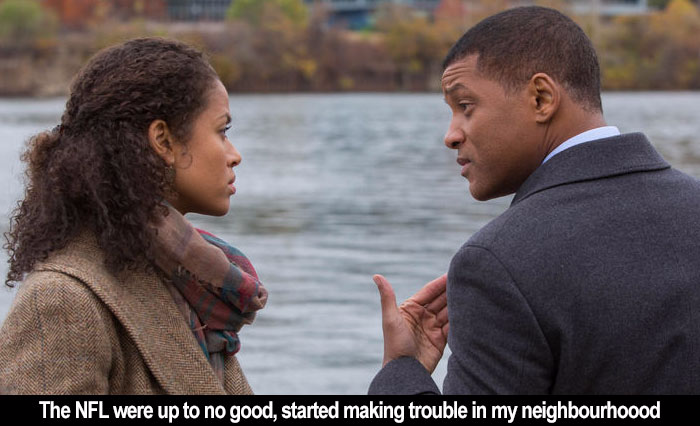 by Walter Chaw Peter Landesman's deeply compromised Concussion so shockingly exposes and excoriates the negligence of the NFL in protecting its players that it's constantly advertised during NFL games. The whole thing feels like a redacted security document: It's choppy, skips over entire plot points, short-sells the issues, and gives equal time to celebrating the beauty and the glory of football as it does to how football turns a scary percentage of its players into confused, manic, suicidal zombies. Save for a few minutes spent with Pittsburgh Steelers centre Mike Webster (David Morse), living in a truck and gluing his teeth into his head with superglue, we don't get much of a glimpse at the symptomatology of "CTE," the repeated-trauma disease discovered by Nigerian-born Dr. Bennet Omalu (Will Smith), who's introduced listing off his accomplishments to declare himself the "smartest person you've ever probably met or will probably ever meet." Concussion is what Spotlight would have looked like had it been made by Cardinal Law: you know, some stuff happened, but the Catholic Church is MAJESTIC. To be fair, we don't get much of a glimpse of anything--not even the romance between Omalu and his ward-cum-lover-cum-spouse (Gugu Mbatha-Raw, so astonishing in Belle and Beyond the Lights; welcome to the mainstream, Gugu!), which is treated in a curious, epileptic shorthand. She's a homeless refugee. She's very religious. Oh, now they're dancing and, um, fucking, and married and, wait, pregnant and married. Wait, now she's doing that wife-in-Bridge of Spies thing where she's protecting the family and... And Concussion is terrible.

Omalu is a pathologist who talks to his dead patients. "Ooookay, meestuh Webstuh, tell me wut happen to you." This drives his white co-worker (Mike O'Malley) batshit, but it's just because he's jealous of the best person on the planet. Omalu's boss, Dr. Cyril Wecht (Albert Brooks), is an Albert Brooks type who dispenses world-wise advice on how to get along with his co-workers and then defends Omalu's findings even though it costs Wecht his job and causes the FBI to open a file on him. This is because the NFL "owns a day of the week. The one the Church used to own." (Say it like Brooks would--or watch the trailer.) It's a monolithic entity that controls billions of dollars in revenue and the hearts and minds of a nation of slavering football fans. I'm one of those fans, by the way. And every time someone gets hurt, I can usually tell, based on my thousands of hours of watching football, what the injury is. What I didn't know, and what the film taught me, is that any kind of blow to the head--even those that don't directly cause concussion symptoms--can aggregate over the course of a career into a degenerative condition that causes early dementia. Unfortunately, Concussion flinches. It holds the NFL's feet to the fire, implies that children should never play the sport, and then it has a long period where people wax poetic on the awesomeness of football and the NFL. It suggests by not driving the knife the rest of the way in that the NFL has done what it can to ameliorate the damage by offering up a simpering title card talking about the large monetary settlement it doled out to participants in a giant class-action lawsuit. I was a little surprised that Roger Goodell didn't receive a co-screenwriter credit.

Concussion, in other words, is the Philadelphia of CTE films: the mass-audience appeasing "serious" picture that, really, has no audience. People who love football generally will avoid it. People who want to see Will Smith kill aliens will avoid it. People who want to see Will Smith in a funny romance will avoid it. People who want to see Will Smith in an adult romance already avoided Focus, so. That leaves awards-season audiences looking for a Theory of Everything to get behind, and most of them aren't interested in Will Smith. Concussion also dances around the problem of racial representation in the NFL--an issue the real Omalu expounds upon at length in every interview in which he's asked about it (see: the one in the CHICAGO TRIBUNE; he minces no words). In its place, Omalu is portrayed very much like Spike Lee's "super-duper magic Negro," and Concussion hopes you won't notice that by focusing instead, and repeatedly, on how much Omalu loves America, the American Dream, and his beautiful young wife. Surprise, now they have kids and live in San Diego. I'd be interested in watching the unexpurgated version of this film, the one the NFL doesn't approve of. My first reaction after screening it was to watch my DVR'd Broncos vs. Patriots game that I'd already watched once. I'm pretty sure whetting my appetite for my favourite gladiatorial contest wasn't the original intent of the filmmakers. Go Broncos.