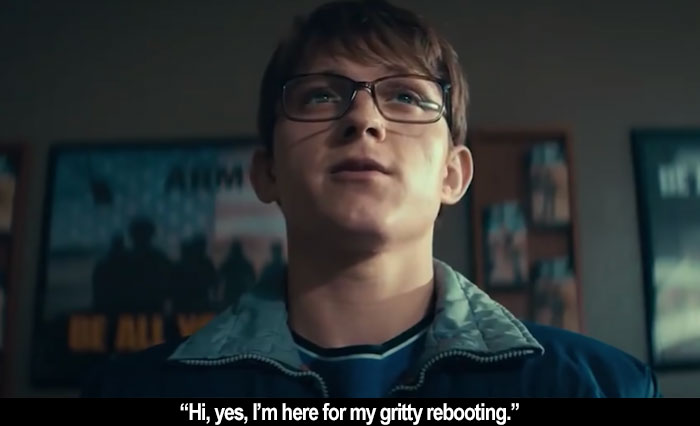 by Walter Chaw When you hit someone coming and going, I think that either it's personal or you don't know what you want. For me, when MCU wunderkinds the Russo Brothers decide to make a big-budget, S.E. Hinton meets John Irving via T.S. Garp version of Rush, shit, I'm into it. One can either complain that everything coming out is the product of an algorithm or endeavour to notice when, for good or for ill, one gets exactly the kind of auteurist dream project in all the show-offy, chaotic glory one's been pining for in endless, exhausting thinkpieces. Criticism that the Russos are trying too hard with Cherry sounds to me suspiciously like the sort of unimaginative personal-grievance pieces cropping up around about the time Scorsese was making stuff like New York, New York, or when The Matrix sequels failed entirely to behave, or when Zack Snyder delivers a four-hour Greek God cut of a superhero movie that is distinctly the product of a single voice. I mean, hate it if you want to, but also fuck off.

Cherry is the YA version of The Panic in Needle Park, where Cherry (Tom Holland) is a junkie so in love with his old lady, Emily (Ciara Bravo), and she with him, that he gets her hooked on junk, too. Their lives fall apart in a series of sections, broken fourth-walls, voice-over narrations, and Van Morrison needle-drops shot with every push, pull, track, zoom in the book. Yet the feel of it isn't frenetic so much as...searching? It's looking for a visual evocation of the transitory nature of youth, when the girl you fall in love with over one magical semester away at college says she's transferring to a school in Canada and, in grief, you enlist in the army and find yourself training to fight a nonsensical war in the Middle East. Holland and especially Bravo look like they're 12 years old, meaning that once they start fucking and then Cherry starts fighting in a war and then they both start freebasing oxy, it carries with it the shock of taboo that Judas and the Black Messiah failed to provide in casting actors a decade too old. The idea that children are being ground to dust by the sickness of this culture--how we treat veterans, the way our healthcare and educational systems work--feels worse when the people you see decomposing in real-time are just kids. There's a reason Holland and Bravo are primarily cast as high-school students. It suits them beautifully here in what is essentially miserablist pornography.

There's a scene early on where Cherry and Emily are hooking up for the first time in a dorm, and Emily lies back on the bed in her bra and skirt and says, "Do what you want." She looks away, and Cherry puts his hand on her stomach and cries. See, that's actually quite beautiful. It captures something delicate in a way that's only really effective if it gets here through all the gauzy The Way We Were campus love stuff the Russos deploy to set the table. The first third of Cherry is Love Story, essentially, though instead of Emily dying of tragic cancer, they both get infected by the rapture of pharmaceuticals that make living in this shithole country bearable for a while. Cherry takes up bank robbery to pay for their habit and, after being confronted one time, asks the teller if she's fought for her country like he has; seen the terrible things he's seen. He's referring to the middle of the film, which is basically Jarhead or, more to the point, Full Metal Jacket, if Wes Anderson had shot the Parris Island sequences. Is it irritating? I guess. I didn't find it so--I found it to be a fascinating porthole into how this new generation of creatives processes decades of representational trauma through a contemporaneously-filtered lens. It's in many ways quite literally the Vietnam play Max Fischer puts on in Rushmore. I remember how Royal Tenenbaum dismisses his daughter's play as just about kids in animal costumes, and he's right but he's also an asshole. The war sequences are pomo interesting in the same way as the first-love sequences, and they lead to the final social-collapse sequences--which, again, made me feel like I felt that first night I stayed up 'til dawn to finish The Outsiders when I was, what, thirteen?

Cherry is maudlin and obvious in many ways, but it also feels like a reset of a master plot that plays like a summary piece--a Cliff's Notes, often a slick one. Cherry is easy to dismiss as a vanity piece and seductive to butcher as one wishes to deconstruct most any sacred cow when they wander into a strange field, but listen, it's smart, and honest about its outrage. Better than that, it's right about why it's outraged and features performers committed to being loathsome and pathetic. This is very much the film that Malcolm & Marie and Crisis both wanted to be: impassioned, timely, extravagant, epic essays on social implosions and the apocalyptic landscapes left in their wake. It's not about special people, and in that way, Cherry feels special. It's about limited people with limited options who can't get well because they have no real resources to do so. Cherry tries to put Emily on a bus at one point, to do the right thing and leave her, send her to rehab--but she tells him that wherever he sends her, she'll just get high without him. I love the detail that Cherry, for all his faults and failures as a human being, makes it a point always to pay his ever-mounting/never-surmountable debts. In a capitalist society, this marks him as a good person. In any other context, it marks him as a victim. The banks are called "Shittybank," his confederates are idiots and cowards, and the only person he meets who is also trying to do the right thing gets murdered by an IED, because military intelligence is indeed still an oxymoron. It reminded me, Cherry did, of maybe a hundred different movies. In the end, it reminded me of Permanent Midnight. Redemption stories, both, by people lucky enough to publish their own cautionary tales--Cherry is based on a semi-autobiographical debut novel by Nico Walker--of being trapped by narratives of aspiration and failure that cycle and cycle and cycle: a needle stuck in a skip. Aren't we all.