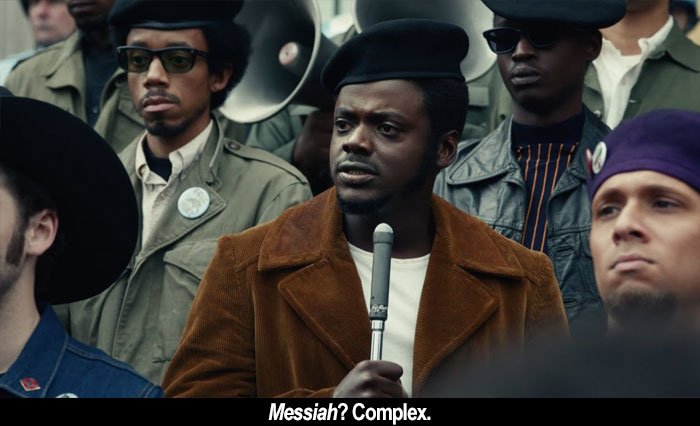 by Walter Chaw Shaka King's Judas and the Black Messiah is a fantastic Vietnam War movie that is not simultaneously a fantastic biopic of Black Panther leader Fred Hampton. It reminded me a lot, and directly, of Brian De Palma's moral opera Casualties of War, which first challenged me to reckon with the American military not as a source of global good but as the perpetrators of atrocity at the whim of an inexorable capitalist, expansionist empire hiding behind the cowl of religion and white supremacy. In that film, '80s emblem of white, "compassionate" conservatism Michael J. Fox plays a green soldier who turns whistleblower as the witness to the misdeeds of his rapacious, brutal company commander, (Sean Penn). Based, like Judas and the Black Messiah, on true events, Casualties of War, again like King's film, sees white America as engaged in war crimes against minority populations. Alas, like De Palma's indisputably powerful piece, King's film is a better cultural self-excoriation than it is an examination of whatever's embedded in the American character that sees the flaying of Black (and Asian) bodies as both inevitable and isolated throughout our short history. In each film, there is the implication that justice of a sort has been served: in the one with trial and imprisonment for the malefactors, in the other (Judas and the Black Messiah) with the reported real-life suicide of the rat in Fred Hampton's cupboard. Neither movie really reckons with the growing silence of minority voices in our discourse.

What Judas and the Black Messiah gets right--and what lingered with me after watching the film--is its atmosphere of literal warfare waged on America's streets between the FBI and the Black Panthers, whose movement promised, among other things, violent upheaval of the status quo. I've read about Fred Hampton, of course, and how even though he was practically a child (he was 21 when assassinated) his charisma was seen as dangerous by our government because he could speak across racial divides to every oppressed group in the United States. (The poor, in particular.) I thought a time or two of the only "Saturday Night Live" sketch in decades that had any kind of social heft as I watched: the skit where Tom Hanks plays a MAGAt contestant on "Black Jeopardy!" and is able to relate to the same fears and grievances as his fellow contestants, who are all Black. If someone were to finally bridge the gulf between the poor and the rich, there would be the possibility for real revolutionary change in this country. The Bastille was not a racial storm, after all, and Fred Hampton represented that possibility for a brief, incandescent moment. Hampton figured out how to beat with the pulse of that collective, unifying animus, and there's a moment early in King's film where his soon-to-be wife, Debbie (Dominique Fishback), seems to be coaching Fred (Daniel Kaluuya) on how best to build a bigger tent. But Judas and the Black Messiah isn't so interested in the issues that could unite us against the abomination of capitalism as it is in creating a broad sketch of a martyr the better to martyr him, cause be damned.

Basically, Judas and the Black Messiah is about how the white establishment destroyed this Black movement--not why the white establishment was threatened by it nor whether the threat was real or merely the petty fears of bigots in a system designed to oppress the working class. There's much meat to chew on in the character of William O'Neal (LaKeith Stanfield), the FBI informant who is enlisted, as a 17-year-old car thief, to infiltrate Hampton's confidence and, throughout a years-long campaign, to work towards Hampton's inevitable extermination. He's threatened with imprisonment on the surface, but at play here is O'Neal's desire to be seen as important, as a major player in a drama whose ignorance and lack of engagement with politics have left him a spectator to history. His betrayal of Hampton is effectively handled better in The Assassination of Jesse James by the Coward Robert Ford, another film with a florid title that more deserves that indulgence. In that film, the assassin is shown as jealous of the importance of his victim--of the way society has contorted its storyline around the mythology of "The Great Man." Hampton was a "Black Messiah" only by dint of the colour of his skin: he's better thought of in history as the Messiah-Messiah for how close he actually came to freeing everyone--not just Blacks--from an economic octopus with its tentacles in law enforcement, the Constitutionally-endorsed slavery of prison labour, red-lining, and on and on.

In the film, O'Neal is just a patsy, and I worry that making his moral murkiness the villain threatens to blame Blacks for the murder of "their" messiah. There's something of the "Jews murdered Jesus" going on in this subtext that bothers me when, in truth, O'Neal has been poisoned by the majority culture into which we are all born and with which we must all at some point come to terms. I'm out of my element here, talking about this. What I really want to say is that Judas and the Black Messiah nails the feeling of not only that era but this one as well: that we are at war with an essentially racist establishment that holds every single advantage except for our numbers. A shootout at Black Panther headquarters while Hampton is serving one of his spurious prison terms is something I would've expected to see in Full Metal Jacket: an image of urban warfare fought on American streets as a mirror to the nausea I felt as I watched police brutalize protestors throughout last year's Summer of Shame. I see the picture trying to humanize the movement, but also see it more successfully portraying the ambiguity of FBI handler Roy Mitchell (Jesse Plemons) as he struggles to deal with his dawning "wokeness" in the company of a fright-show J. Edgar Hoover (Martin Sheen). And in the middle of it all is Kaluuya's Fred Hampton, who is glimpses of many things but not a consistently fleshed-out figure, much less one who convinces me that he is a leader of some men--let alone all men. I get his righteous outrage because I feel it anyway; the charisma is muted beneath his sense of doom. I don't believe that he believes that a change is gonna come: his Fred Hampton is dead before the movie starts. And if he doesn't believe it, how can anyone else?