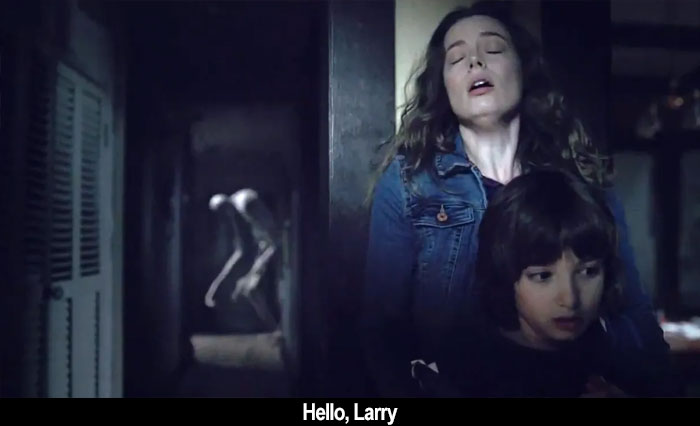 by Walter Chaw It's difficult to know whether writer-director Jacob Chase's feature debut Come Play means well or means ill; whether it's an earnest attempt to discuss autism using a horror premise as metaphor for its impact on a family, or just a cheap rip-off of the already-cheap "Jung for Dummies" flick The Babadook. Even its execution vacillates between "super clumsy" and "surprisingly effective." It's like Come Play is at odds with itself--almost as though there were compromises made to get it made, and so what results is a possibly compelling premise with a couple of nice moments reduced to a derivative stock chiller that's all the more frustrating for that promise. A horror movie about a creature haunting our various screens is at least timely, right? A Ringu update, perhaps. A Mercury Rising redux swinging drunkenly from unintentionally hilarious to probably-unintentionally offensive likely wasn't the desired outcome.

Anyway, if we engage with Come Play seriously, we find we have to ask what it is about our hero Oliver that makes him the target of the dread, grey monster Loneliness, er, "Larry." Larry is a Slender Man-looking thing from a digital storybook who tells a sad tale of wanting a buddy. I mean, who doesn't? Larry is Oliver's immense loneliness made manifest, and his vehicles of transference are the devices Oliver uses to communicate with his long-suffering parents (Gillian Jacobs and John Gallagher Jr.), teachers, and bullies. The devices talk for him. They play him "Spongebob Squarepants" on an endless loop whenever Oliver needs a little pick-me-up or, Bumblebee-like, to speak through a few select episodes. Larry does that, too, cruising through television clips in one moment in order to string together a scary threat his victims sort of stand there watching for a long--too long--time.

Maybe Larry is Oliver's expression of desire. No "maybe" about it. Come Play incidentally also cribs story elements from Dark Water and Mama and Impetigore and Lights Out and Poltergeist and and and... Did I mention that Oliver is neurodivergent? Someone says he's autistic at one point in answer to a bully's question early on, though when it's later revealed that said bully used to be Oliver's buddy, it's fair to wonder why he needs this question answered unless it's for the audience's sake. Larry then becomes a metaphor for not merely a child's loneliness, but a neurodivergent child's loneliness eventually metastasizing into violence. One way to make Come Play interesting would have been to have Oliver shoot up his school. If you're going to play fast and loose with a sensitive topic, go hog, man. Lean into it.

Like the phantoms in The Shining, Larry is a metaphor for a disintegrating family when disinterested dad Marty moves out one night after arguing with saintly Sarah. I like how Chase shoots Marty pulling out of the driveway after the fight, thinking the POV belonged to poor Oliver. But the POV doesn't belong to anyone--not even Larry, because Larry sees through screens, you see, and the scene pans from Marty abandoning his family to Oliver sleeping soundly. That's too bad, mostly because rather than allowing Larry to become a stronger metaphor for fears of abandonment and how a child will use trauma to navigate an increasingly treacherous world, it makes Oliver even more of a victim with whom we wait breathlessly for the next hammer to fall. I don't think it's an accident that Oliver is made to look a lot like Danny Lloyd from Kubrick's The Shining, although I will say it's a mistake to try to pull depths from a complementary work to mask the lack of the same in yours.

A note, too, that I think women can be heroic without being mothers, and that I seem to have no patience left for narratives where an inadequate white bro is redeemed through the sacrifice of others. Ultimately, Come Play is only really interested in Marty's arc from laid-back "cool guy" to notes-taking single-dad caregiver. He even starts wearing lumpen cardigans to denote his evolution. Larry, his child's loneliness and rage, then becomes the catalyst for Marty's salvation. So does Sarah, who crosses over into the Underneath to lend Marty a spark of tragedy. Without spoiling it, I will say that the end of the picture is lifted from Ghost (or Shrek) and, just like Ghost (or Shrek), it doesn't play at all fair with its own premise. If you want Whoopi Goldberg to kiss Demi Moore, fucking show it.

For the rest of it, if we're not taking Come Play seriously, it's just lots of jump-scares arising from when parents who know their child is in peril continuously disappear for long stretches for no reason except to imperil the child further. A sleepover (sporting some genuinely great work from the underage actors in the cast) is especially frustrating, given how high the stakes are for Sarah that Oliver has a nice time, and yet she never investigates all the screaming and pounding noises until things are well and truly off the rails. Jacobs does her best, but the script is invested in making her seem ridiculous. That Rosemary's Baby scene where she tries to tell Marty the bogeyman is out to get their boy is one of those unintentionally hilarious passages in Come Play because, yeah, there's nothing credible about this premise. I mean, look, if a monster is trying to break into our world through our screens, why is the solution to break the screens? Let me help you with that, Larry, c'mon in. If Larry's an electricity monster, what's its range and why does it need screens? If it's a metaphor for an autistic kid's loneliness, why does it want to make the autistic kid into a metaphor for other kids' loneliness? So many "ifs"--and none of the answers are fun. Alas. At least Larry, when he's a puppet, is kind of cool.