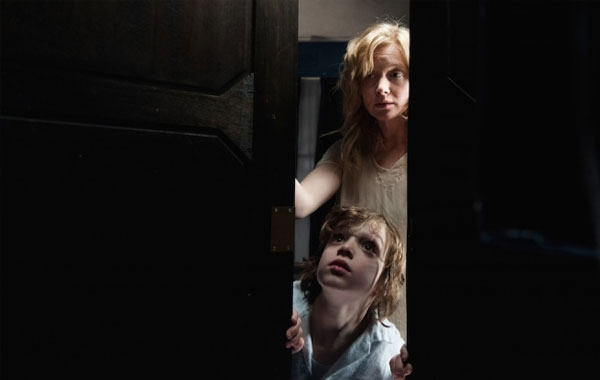 by Walter Chaw Though taut and incredibly well-performed, Jennifer Kent's assured debut The Babadook has a general lack of faith that subtext is most effective when it remains subtext. There's irony there, somewhere, in saying this about a horror movie that's essentially about the concept of a Jungian Shadow. The Babadook concerns a mysterious children's book featuring the titular bogey, who, after knocking to announce itself, bloody well lets itself in, thank you very much. Discovered one night by troubled little Samuel (Noah Wiseman) and read to him by his mom, long-suffering palliative-care nurse Amelia (Essie Davis--stardom awaits), the book foretells the arrival of a Jack White-looking thing (Tim Purcell) that serves as an unfortunately obvious metaphor for repressed grief. It’s a pity, because for all the wonderful moments of the film, it never feels truly menacing--I never believed that it would be a fable that ended in a moral, hard-won, rather than a fairytale with a happily ever after.

For her part, Davis carries the picture with absolute confidence. Her transition, her frustration and fear for her kid, the way that she and Kent navigate the judgment of others and the atmosphere of mistrust and approbation that builds throughout, all of it is remarkably good. It's funny where it needs to be, scary when it needs to be, doesn't overuse jump-scares or the "weak" side of the camera, and moves forward with expert pacing. The best parts of The Babadook are in fact about Amelia's struggles as a single mother and the dawning awareness that maybe this repression (the book scolds that the more you deny it, the bigger it gets) of her situation as a young, working widow is leading to a nervous breakdown. It's really pretty good, in other words--the climaxes are just that, and it's all planned out carefully; it looks fantastic, and it's clearly "about" something, although its "something" is less revelatory than it is shrug-worthy.

Too bad. There's room in The Babadook to develop little Samuel into the filter for parental grief and inattention. To make him the centre of it instead of a satellite to Amelia's pain. The weakest portion of the film involves a brief dip into Home Alone territory, with Samuel rigging traps and engineering weapons. It's something that belongs in another movie--or even this one, if Samuel had been developed differently. Taken from the parental point-of-view, The Babadook becomes intellectual as opposed to primitive: its fears are about being a good grown-up rather than the impossible, helpless terror of being a child. The better than "really pretty good" version of The Babadook involves Samuel's psychedelic odyssey, not Amelia's psychological actualization. As it is, it's a lovely calling card for both Kent and Davis: a first film that doesn't necessarily act like one, with a breakthrough performance that in a just universe will lead to other roles as real people, with real problems, Babadook-related or otherwise.